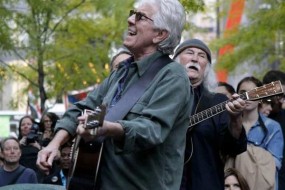 Tuesday in New York, singing “Teach Your Children” and other songs from an earlier age of social activism.

“This is today’s Woodstock,” attendee Greg Horowitz told the New York Daily News. “It’s an honor [they] came down.”

Two-thirds of Crosby, Stills and Nash — and both members of the Rock and Roll Hall of Fame — played an acoustic concert in Zuccotti Park. Crosby and Nash, who are touring again as a duo, have taken part in political protests for more than 40 years. Crosby phoned in over the weekend to Los Angeles talk radio staiton KFI-AM (640) during recently fired KLOS-FM (95.5) deejay Jim Ladd’s guest stint and spoke of a recent visit to New York to talk to Occupy Wall Street protesters.

“People are [ticked] off, and they have a reason to be [ticked] off,” Crosby told the Daily News after his performance. “They just want jobs. They want to be part of society. I’m here to help. The system is against them,” he said.

In Los Angeles, Rage Against the Machine/Nightwatchman singer-guitarist Tom Morello recently sang  for those encamped outside City Hall, and he also has played at the New York demonstrations. Street musicians have been a regular presence at Occupy sites in various cities.