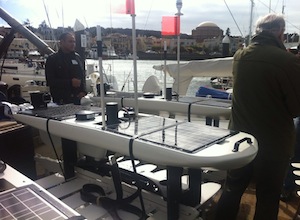 Propelled by a series of fins beneath the water, the fuel-less and solar-powered Wave Glider is making waves in the world of ocean research.

that will take them to Australia and Japan. Named after accomplished ocean explorers, the robots will become pioneers in their own right when they complete their journeys, setting the world record for the longest autonomous oceanic journey. What’s more, when they reach their designations, they’ll have done so without using a single drop of fuel.

Silicon Valley startup Liquid Robotics are sending the robots out as a kind of high-profile advertisement to government, military, and commercial entities that might want a cheaper and greener way to collect ocean data. Dubbed Wave Gliders, the surfboard-sized robots have titanium-framed fiberglass bodies that encapsulate terabytes of flash memory, a dual-core ARM processor that runs on open Linux software, a GPS unit, a battery pack and wireless and satellite communications with which to receive commands and beam back data. Data to be collected bysensor arrays include water temperature, oxygen levels, air temperature and pressure, crude oil concentrations in regions unfortunate to have them, and other metrics. 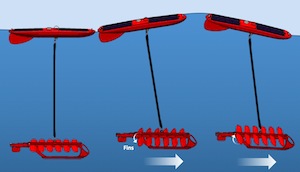 Ocean vessels can run companies and researchers $30,000 to $150,000 a day to operate. The Gliders don’t need a staff, and they don’t need fuel or to be resupplied. How do they get around without fuel? Twenty-three feet below the Gliders are six fins projecting from a rudder. The fins use the up-and-down motion of ocean waves to propel the robot along. Not the speediest way to travel, top speed is a sluggish two knots. But the fins allow the Gliders to both travel or remain stationary as when collecting data at a particular point without the need for fuel.

Energy for the onboard equipment is supplied by two solar panels covering the Glider. It’s this self-sustaining energy system that make the Wave Gliders so cheap to operate and valuable to oil companies, researchers, and the military. Investing heavily in start-up costs and R & D, Liquid Robotics is not yet profitable.

The current expedition is supported by Richard Branson’s Virgin Oceanic – the thrill-seeking billionaire’s own ticket to the ocean depths – and Google Earth. The data gathered from this maiden voyage will be made available to scientists, educators, students, and the general public real-time and free of charge.

That’ll change in the future when the data will be made available for purchase. The gas and oil industry spends about $250 million per year on buoys, ships and satellites to search for new oil sources beneath the ocean surface. With the potential for big bucks from oil companies, it’s no wonder Liquid Robotics has already received $40 million in venture funding.

Check out the elegant efficiency of these wave-making robots in the following video.

The initial leg of the journey will take the four robots to Hawaii. From there, Benjamin and Papa Mau will veer off and head for Brisbaine, Australia while Piccard and Fontaine will make for Japan. Crossing the ocean is a risky undertaking, to say the least. The robots will pass through the North Pacific Tropical Gyre – aka “The Garbage Patch.”

The gyre is a gigantic vortex into which tons of junk have been swept. Having navigated the gyre, the robots will have to contend with the tumultuous currents at the equator. And as you saw in the video, barnacles remain a constant nuisance. “It’s a tough thing to do and we may not make it,” Vass told to his team moments before the four robots shoved off, reported Forbes.

When the data starts coming in Liquid Robotics and Google Earth with set up a platform from which we’ll be able to track to robots’ movements. We’ll keep our fingers crossed that their journey is a safe one.

More than 70 percent of the Earth is covered by water. The oceans regulate the planet’s temperature and drive its weather. And all life is ultimately depending on its ebbs and flows yet only about five percent of our oceans have been explored. Permanent underwater observatories like the Ocean Observatories Initiative’s, while data gathering powerhouses, are limited to collecting data from their immediate areas. By being able to traverse entire oceans in an amazingly cheap and environment-friendly way, the Wave Gliders stand to be ocean research game-changers.