(RNS) He considered moving to a Zen monastery before shifting his sights to Silicon Valley, where he became a brash businessman. 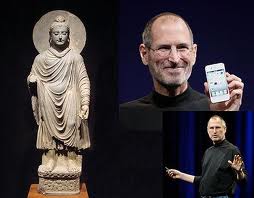 By Daniel Burke Religion News Service:  He preached about the dangers of desire but urged consumers to covet every new iPhone incarnation.

“He was an enlightened being who was cruel,” says a former girlfriend. “That’s a strange combination.”

Now, we can add another irony to the legacy of Apple co-founder Steve Jobs: Since his death on Oct. 5, the famously private man’s spiritual side has become an open book.

A relative recounted his last words for The New York Times. A new biography traces his early quest for enlightenment and lifelong appreciation for Zen Buddhism. Everyone from ABC News to India Today has pondered the link between his religious interests and business acumen.

All this for a guy who guarded his personal life like it was an Apple trade secret.

On Sunday (Oct. 30), The New York Timespublished the eulogy that Mona Simpson, Jobs’ sister, delivered at his Oct. 16 memorial service.

In his last moments, Jobs’ breath shortened, as if he were climbing a steep path. His last words were “OH WOW. OH WOW. OH WOW,” Simpson writes.

Whatever Jobs saw, he had been seeking it for decades, according to a new biography by Walter Isaacson.

“For most of my life, I’ve felt there must be more to our existence than meets the eye,” Jobs told Isaacson. The adopted son of blue-collar Californians spent much of his early adulthood searching for that unseen something.

At age 13, Jobs asked the Lutheran pastor of his parents’ church if God knew about starving children. “Yes, God knows everything,” the pastor replied. Jobs never returned to church, refusing to worship a God who allowed such suffering.

He also studied Buddhism, practicing meditation and reading “Zen Mind, Beginner’s Mind,” a collection of lectures by Shunryu Suzuki, one of the first Zen masters to teach in America.

In 1974, Jobs traveled halfway around the world, to India, in search of his own guru. Upon returning, he found one in his hometown of Los Altos, Calif., where a Suzuki disciple, Kobun Chino Otagawa, had opened the Haiku Zen Center.

Jobs and the Zen master quickly forged a bond, discussing life and Buddhism during midnight walks. “I ended up spending as much time with him as I could,” Jobs told Isaacson. “Zen has been a deep influence in my life ever since.”

Jobs even considered traveling to Eihei-ji, the main training temple of the Soto school of Zen in Japan. But Kobun, as he was known, counseled Jobs to stay in California.

Les Kaye, a Zen teacher in Silicon Valley who also studied under Kobun, remembers Kobun as enigmatic and wise. “He was the epitome of an enlightened being: sweet, kind and generous. People flocked to him.”

In 1976, after just one year, Jobs stopped practicing Buddhism at the Haiku Zen Center, said Kaye, who was a member of the center at the time. Apple had begun to consume the budding businessman’s attention.

Jobs kept in contact with Kobun, asking him to officiate at his 1991 wedding. He also gave friends recordings of Kobun’s lectures, including one in which he cautions against craving. Buddhism’s “first noble truth” teaches that desire fuels suffering.

Jobs bristled when a friend pointed out the irony of a marketing genius warning against materialism, according to Isaacson.

When Kobun drowned in 2002, Jobs called Kaye in tears. “Kobun’s death really struck him,” Kaye said. “He was beside himself.”

Jobs believed that Zen meditation taught him to concentrate and ignore distractions, according to Isaacson. He also learned to trust intuition and curiosity — what Buddhists call “beginner’s mind” — over analysis and preconceptions.

Kaye, who teaches meditation to Silicon Valley companies, said Jobs was delighted when he began offering classes at Apple 12 years ago. He particularly wanted Apple’s engineers to learn meditation, Kaye said, to boost their creativity.

But Jobs told Kaye that he had practiced Zen “only occasionally” in recent years.

Despite his Buddhist background, Jobs was often mean, manipulative and egocentric, writes Isaacson, whose book is filled with tales of the Apple chief’s abusive behavior.

“Unfortunately his Zen training never quite produced in him a Zen-like calm of inner serenity,” Isaacson writes, “and that, too, is part of his legacy.”

“He got to the aesthetic part of Zen — the relationship between lines and spaces, the quality and craftsmanship,” Kaye said. “But he didn’t stay long enough to get the Buddhist part, the compassion part, the sensitivity part.”