Back in 1999, middle-class Americans were following the impeachment trial of President Clinton, reeling from the Columbine shootings, and fretting about Y2K. 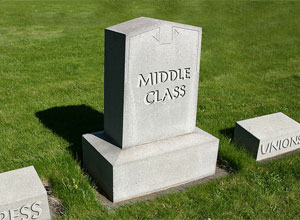 Though the middle class isn’t dead yet, at least a tombstone has been picked out.

But if they knew then what we know today, they would have also been holding onto every penny of their savings with a kung-fu grip. Why? Because in that year the average American household earned its peak income, and though it has fluctuated during its decline over more than a decade, a post-recession nosedive has sunk income three years in a row to 1996 levels, according to a recent report from the Census Bureau. This has prompted a flood of media coverage about the end of the middle class, including the recent We Are the 99.9% op-ed in the New York Times, which effectively draws the line between the super rich and everyone else.

As in previous tough times, the middle class could hunker down and weather the storm if it weren’t for certain detrimental factors at play (I’m looking at you globalization). While one would hope that analysts could read economic statistics like tea leaves to uncover something promising for the future, the numbers don’t look good.

The proof’s in the pudding, as they say, so let’s have a heaping helping of charts to help us investigate what’s happening to the middle class. Take a look at the median household income numbers from the Census Bureau report Income, Poverty, and Health Insurance Coverage in the United States: 2010: The chart shows that over the past 40 years, median household income has fluctuated, with the downturns often occurring during recessions. In 2010, median income experienced its largest 3-year change in this time frame and hovered just above the $49k mark, close to 1996 levels. That’s 7 percent lower than in 1999, the highest household income to date. Now, there’s a chance that household income will tick back up, but considering that the economy seems to be on life support, unemployment is hovering around 9 percent, and next year is an election year, odds are in favor of a continued slide in household income.

Since median household income is taking the average for all households, these data give you an across-the-board view of how income is changing. But how can we get a handle on whether the middle class is really suffering as much as all the media chatter implies it is? After all, if the middle class is playing limbo, how low can it go before it falls down? Well, one way to figure it out is to check out the change in the poverty rate:

According to the chart, the percent of households in poverty is on the rise as it ticked back up to 15 percent in 2010, the first time since 1993. Now, poverty is certainly a complex socioeconomic issue, but it is also clearly trending with the last three years of declines in household income.

The National Coalition for the Homeless cites two causes of increases in poverty: eroding employment opportunities and decreases in public assistance. In addition to the loss of manufacturing jobs replaced by lower-paying service industry jobs, the real value of minimum wage is less than what is was in 1981, after being adjusted for inflation. Furthermore, homelessness and poverty are certainly linked, and throw in the ongoing fallout of the housing crisis, i.e. masses of worthless homes in foreclosure and increased demand for rentals, causing increases in rents, and it makes sense why poverty is on the rise. In the current economy, an increasing number of people are falling right out of the bottom of the middle class.

And what about unemployment? The rate of unemployed is now at 9 percent, and the last time it was that high was in the mid 1980s. Perhaps back then, the attitude that the unemployed just aren’t looking hard enough for work may have persisted, but times have changed. From a recentIssues in Labor Statistics, the following chart shows the length of time the unemployed spent looking for a job before they either got a job or just gave up their job search. You can see from the chart that the median number of weeks individuals were unemployed doubled. In addition, the number of persons who were unable to find work and eventually left the labor force doubled as well. This trend shows that it’s taking twice as long for people seeking work to be hired. It’s also crazy to realize that the average unemployed person who eventually opted to stop working altogether spent about 10 months looking for work, when only two years ago, the average person left in half the time. The bottom line is finding work is about twice as hard as it was two years ago, and suddenly a stubbornly high unemployment rate makes a lot more sense.

Taking all of this in, it seems that dwindling numbers of Americans will be able to achieve the American Dream in the near future. But wait…before anyone starts to point fingers, we need to ask a very simple and difficult question: wasn’t this bound to happen, one way or another?

Since the Internet came on the scene, Americans have been heavily pro-technology, which means perpetual upgrading of electronic stuff. As a nation, we’ve also supported the removal of any barriers, real or otherwise, that would prohibit access to other countries and cultures, either for business or pleasure (and when it flows both ways, it’s called globalization). Finally, Americans like a deal: we want the best for as little as we can pay for it, which means someone, somewhere is making our goods as cheaply as they possibly can, and guess where that is (hint: it’s not on this continent).

Now, take all of these together and throw in an Internet revolution, the digitization of just about everything, adoption of automation, and advances in telecommunications, and what do you have? A world that is rapidly becoming a more even playing field. One might say that what the American middle class is experiencing today is called being humbled in that it is being brought down to the middle class of the world. Unfortunately, it turns out that it’s a pretty big fall. Who knew that the rest of the world had it so bad?

So what does this mean? Inequality is increasing and the middle class is disappearing, or perhaps it’s better to say that the middle class is transforming. At least that holds a smidgeon of promise…and possibly a way out if new 21st-century industries can emerge that can increase household income for the 99.9%. Here’s hoping.