by Kristy Hessman:  By now you’ve heard of CFLs (compact fluorescent light bulbs) as a green-friendly lighting alternative, but have you heard about ESLs? 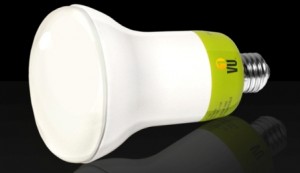 ESL stands for “electron stimulated luminescence” and it’s a new energy-efficient bulb developed by Vu1 – that’s “view one” – and soon you’ll be able to buy their bulb at your local Lowe’s store.

So what’s the difference between CFLs and ESLs? The biggest difference is the ESL bulb is mercury-free. According to the company, ESL buls use “accelerated electrons to stimulate phosphor to create light, making the surface of the bulb ‘glow.’” Vu1 says the technology creates the same light quality as an incandescent “but is up to 70 percent more energy efficient, lasting up to 5  times longer than incandescent and contributing to the reduction of greenhouse gas emissions.”

The ESL R30 reflector bulbs are a replacement for 65-watt incandescent flood bulbs commonly found in recessed lighting fixtures in American homes and businesses. At first glance, the bulb looks similar to the incandescent bulbs it replaces, only this energy-efficient bulb will last up to 11,000 hours. ESL bulbs will retail for approximately $14.98 at Lowe’s. And, Vu1 notes, you won’t have to worry about special disposal of the bulbs since they are mercury-free.