By Joe Romm:  According to Dr. Pearce, the real cost in 2011 is under $1 per watt for solar panels purchased in bulk on the global market. 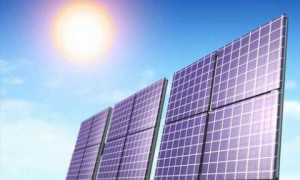 The public is being kept in the dark about the viability of solar photovoltaic energy, according to a study conducted at Queen’s University. 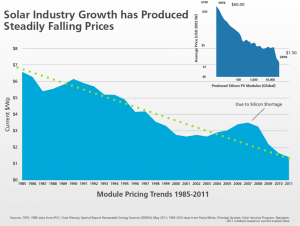 That’s the news release for a new journal article, “A review of solar photovoltaic levelized cost of electricity” (subs. req’d).  The analysis concludes:

Given the state of the art in the technology and favourable financing terms it is clear that PV has already obtained grid parity in specific locations and as installed costs continue to decline, grid electricity prices continue to escalate, and industry experience increases, PV will become an increasingly economically advantageous source of electricity over expanding geographical regions.

That argument is one Climate Progress and others have been making for a while (see ‘Ferocious Cost Reductions’ Make Solar PV Competitive and Utility CEO on Solar: In “3 to 5 Years You’ll Be Able to Get Power Cheaper from the Roof of Your House Than From the Grid”.)

Analysts look at many variables to determine the cost of solar photovoltaic systems for consumers, including installation and maintenance costs, finance charges, the system’s life expectancy, and the amount of electricity it generates.

Dr. Pearce says some studies don’t consider the 70 per cent reduction in the cost of solar panels since 2009 . Furthermore, he says research now shows the productivity of top-of-the-line solar panels only drops between 0.1 and 0.2 percent annually, which is much less than the one per cent used in many cost analyses.

Equipment costs are determined based on dollars per watt of electricity produced. One 2010 study estimated this cost at $7.61, while a 2003 study set the amount at $4.16. According to Dr. Pearce, the real cost in 2011 is under $1 per watt for solar panels purchased in bulk on the global market, though he says system and installation costs vary widely.

Solar is ready for its close up now.

For more, see Anatomy of a Solar PV System: How to Continue “Ferocious Cost Reductions” for Solar Electricity:

(Chart from Emanuel Sachs of MIT. Note: Even this data is already two years old.)