China’s Newest Train Hits 500 km/h! Only a Taste of What’s To Come

What did China get for Christmas? A train set that goes 500 km/h. 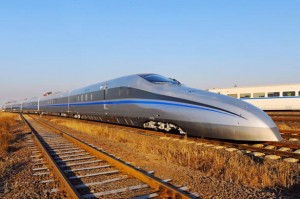 The experimental bullet train, which can reach top speeds over 310 mph, was debuted on December 25th in Qingdao in Shangdong Province. Inspired by the shape of ancient Chinese swords, the aerodynamic CRH series train can deliver 22,800 kW of power to its load, allowing it to set speed records in China (though France still holds the world title).

The sword-train, created by CSR Corp. Ltd. is part of a “faster test train project” aimed at advancing the already impressive national railway system with improvements in materials, braking, automated safety awareness, and failure analysis as well as raw power and speed. While still a development platform, the new train portends the next step in Chinese transportation as the country pushes for higher speed routes, better transfer systems, and a global reputation for its railways. With this latest feat of engineering, China is again demonstrating its commitment to creating the infrastructure that will sustain the emerging nation in the 21st Century.

China launched a super-rapid test train over the weekend which is capable of travelling 500 kilometers per hour, state media said on Monday, as the country moves ahead with its railway ambitions despite serious problems on its high-speed network.

The train, made by a subsidiary of CSR Corp Ltd,China’s largest train maker, is designed to resemble an ancient Chinese sword, the official Xinhua news agency reported.

“We aims to ensure the safety of trains operation,” he said.

In February, the railways minister, Liu Zhijun, a key figure behind the boom in the sector, was dismissed over corruption charges that have not yet been tried in court.