The strongest geomagnetic storm in more than six years is set to hit the Earth’s magnetic field today. 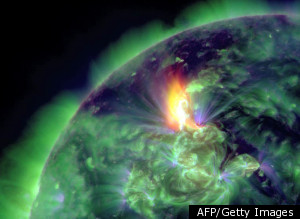 Airline routes, power grids and satellites could all be affected, according to the US Space Weather Prediction Centre.

The storm is caused by a violent coronal mass ejection – a chunk of the Sun’s atmosphere driving energized solar particles at around 5 million mph – which is expected to arrive at around 2pm GMT.

The energy could interfere with high frequency radio communications used by airlines to navigate close to the North Pole. 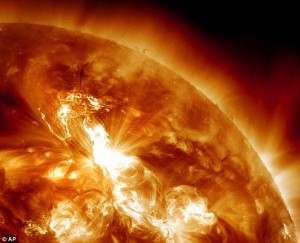 Astronauts on board the International Space Station have also been advised to shield themselves to avoid a heightened dose of radiation, Sky News said.

The centre’s Terry Onsager said: “When it hits us, it’s like a big battering ram that pushes the Earth’s magnetic field. 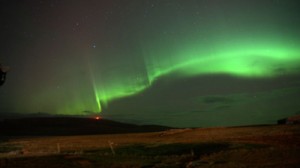 A rush of radiation in the form of solar protons has already started bombarding the Earth and is due to continue until tomorrow, AFP reported.

Doug Biesecker, a physicist with the National Oceanic and Atmospheric Administration, said that although the radiation storm is the most severe since 2005, it still only ranks a three on a scale of one to five.

According to Biesecker, this ranking means: “It could, for example, cause isolated reboots of computers onboard Earth-orbiting satellite and interfere with polar radio communications.”