An 83-year-old woman suffering from a lower jaw infection became the first personto receive a jaw implant manufactured with a 3D printer. 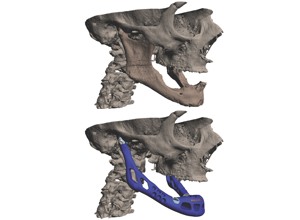 Infections such as hers are normally remedied with reconstructive surgery, but doctor’s deemed the procedure too risky because of her age and health. Instead they turned to LayerWise, a company that specializes in 3D printing of metallic structures.

Titanium powder was melted with a high-precision laser into layers guided by a computer model of the jaw. The computer model was digitally divided into 2D layers and printed at 33 layers per millimeter. The 3D printing made it possible to create an implant that just as intricate as the real thing. With articulated joints, cavities that foster muscle attachment, and grooves to guide nerve and vein regrowth, the new jaw was an intricate piece of hardware. It normally takes several days to make a custom implant, but the 3D printed implant took just a few hours to print. After the implant was made it was treated with a bioceramic coating by Cam Bioceramics BV. The surgery to attach a jaw implant normally takes around 20 hours. But because the printed implant fit so well surgeons were able to attach it in just four hours. A shorter surgery makes for a shorter recovery. The patient was able to go home with her new jaw after only four days. Normally recovery takes weeks. She was able to speak a few words after waking up, and the following day she was able to swallow again. Being made of titanium, the new jaw weighs 107 grams or about a third heavier than the patient’s own jaw. The doctors think she’ll adjust easily.

The implant is treated with a bioceramic coating prior to implantation.

The new method was made possible by research performed at the Biomed research group at the University of Hasselt in Belgium and researchers at four other universities. The surgery was performed last June but is only now being announced. Later this month the patient will undergo a follow-up surgery to remove healing implants which have served as place-holders for the patient’s teeth. After they’re removed, false teeth will be screwed into their place.

The structures that can be produced by the layer-by-layer materialization of 3D printing are practically limitless. By comparison, creating medical implants with conventional metalworking is time-consuming, expensive, and the implants don’t match the original as well. Last year an orthopedic surgeon used a 3D printer tomake bone models from CT scan images that doctors could use to prepare for surgeries. Others are trying to push the medical implant envelope by printing organs! It will be a while before our bodies’ organic material will provide us a reliable ‘ink,’ says Ruben Wauthle at LayerWise, citing many biological and chemical issues that are yet unresolved. Even so, 3D printing could be a major boon for medicine in the near future. No doubt others will adopt printing for jaw and other types of bone replacements. The patients will be better off, and hospitals will save time and money.