by Jerome Groopman:  After the birth of each of our three children, my wife and I breathed a deep sigh of relief. 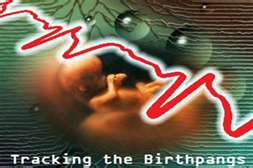 We had been meticulous in following our obstetrician’s advice: we had been screened for the Tay-Sachs trait, and had an amniocentesis to check for chromosomal changes associated with Down syndrome, and ultrasound to assess the fetus’s growth. Everything looked normal. But with the acute awareness of two physicians, we knew that these tests did not reveal all the problems that can occur during gestation. So when we heard the piercing cry of our newborn and were told the baby had a high Apgar score, we believed we had successfully skirted the perils of pregnancy.

But in the decades since our children’s birth, results from research studies have suggested that we do not put fetal life so readily behind us. Rather, as Annie Murphy Paul writes in her informative and wise new book, “fetal origins research suggests that the lifestyle that influences the development of disease is often not only the one we follow as adults, but the one our mothers practiced when they were pregnant with us as well.” This hypothesis was initially put forth by David Barker, a British physician who in 1989 published data indicating that poor maternal nutrition put offspring at risk for heart disease decades later.

Barker’s hypothesis was initially dismissed by the medical establishment as an artifact of looking in hindsight at birth-weight and the later development of disease, without detailed knowledge of what happened in the interim. Of necessity, research on fetal development involves observing pregnant women in their daily lives; no one would purposefully have one group eat in a possibly risky way or be exposed to a potentially dangerous substance, and compare outcomes with an unperturbed control group.

We have, at best, only correlations between a mother’s lifestyle and her child’s future health, not clear causation. Nonetheless, a growing number of observational studies conducted in different parts of the world since Barker’s initial report bolster the notion that in the nature-nurture dynamic, nurture begins at the time of conception. The food the mother eats, the air she breathes, the water she drinks, the stress or trauma she experiences — all may affect her child, for better or worse, over the decades to come.

Of course, the Barker hypothesis risks bringing the normal simmering anxieties of pregnancy to a neurotic boil. Paul, previously the author of “The Cult of Personality,” a critical look at personality testing, notes that fetal origins research is often covered in a “sensational and scolding” way in the media, “cast as one long ringing alarm bell.”

To her credit, she steers away from such sensationalism. Structuring her exploration of the subject around the nine months of her own (second) pregnancy, she provides a balanced, common-sense view of an emerging field of uncertain science.

Paul leavens the normal concerns of pregnancy with wry humor. In her chapter on the impact of maternal diet, she recalls that “during my first pregnancy, I signed up to get weekly e-mails from a parenting Web site. Each Saturday a message would appear in my in-box informing me of my fetus’s current size, invariably described in terms of something edible. At nine weeks, I learned, my fetus was as big as a grape; at 17 weeks, a turnip; at 19 weeks, a ‘large heirloom tomato.’ The implication was clear: your baby is what you eat, and your baby had better not be the shape of a ‘Twinkie.’ ”

Paul discusses the considerable evidence that maternal overeating might predispose a baby to diabetes and other hormonal disorders. But could a mother’s taste in, say, breakfast, also influence her child’s gender? Paul presents research from Fiona Mathews of the University of Exeter and two colleagues from Oxford University indicating that women who eat cereal every morning have a higher chance of delivering boys.

“The fact that many young women of reproductive age skip breakfast or consume low-calorie diets in order to keep their weights down . . . could help explain the falling rate of male birth,” Paul writes. But then she turns to Stanley Young, a statistician at the National Institute of Statistical Sciences, an independent institute based in the Research Triangle of North Carolina, who is scathing in his analysis of the findings from Britain.

Young points out that if you ask subjects enough questions — Mathews’s study asked about more than 100 different food items — you will find some statistically significant relationship, simply by chance. These kinds of results, Young has written, “should be viewed with some skepticism, since the human imagination seems capable of developing a rationale from most findings, however unanticipated.”

Mathews defends her work, and while the scientific duel goes on, Paul smartly concludes: “Perhaps these posited explanations have merit, or perhaps they are modern-day versions of the folklore that surrounds so much of pregnancy, and fetal sex in particular. For now, I file them away, along with the fact that I eat a bowl of raisin bran every morning.” (Her second child, it turns out, is a boy.)

Over her nine months and nine chapters, Paul touches on some highly charged subjects, like the potential effects of maternal lifestyle on a child’s temperament, I.Q. and sexual preference. (While exposure to certain chemicals and pollutants may affect cognitive development, any impact of maternal lifestyle on temperament and sexual preference is far from clear or convincing.)

She also looks at the impact of emotional distress. Researchers have studied the effects of various traumatic events, from the Northridge earthquake toHurricane Katrina to the Holocaust, and have often found striking effects. One study of people born in Jerusalem indicate that those who were in their second month of gestation in June 1967, the time of the Arab-Israeli Six-Day War, were more likely to developschizophrenia as young adults.

Researchers term such extreme events “natural experiments” because they affect every pregnant woman in a given community (those who are “troubled” from the start as well as those who are psychologically healthy); occur within a discrete period of time; and can be matched with the gestational age of the fetus. As Paul points out, they are “the next best thing to a traditional scientific experiment, in which subjects can be randomly assigned to one condition or another.” But the results are still confounded by the fact that numerous other events that are not reported or recalled may also account for the outcome.

Throughout “Origins,” Paul consistently hews a middle ground between dismissive skepticism and blind acceptance of research results. In her chapter on stress, she quotes Calvin Hobel, an obstetrician at Cedars-Sinai Medical Center in Los Angeles, who asserts that even ordinary stress can have deleterious effects, like premature labor or low birth-weight.

But Janet Di­Pietro, a development expert at Johns Hopkins, takes the opposite view, pointing out that the placenta breaks down the stress hormone cortisol in the woman’s blood, preventing most of it from reaching the fetus. “Most pregnant women can stop worrying about stress hurting their fetuses,” she tells Paul. And moderate stress may actually be good for the fetus.

According to one of her studies, women who reported moderate daily anxiety and stress during pregnancy had children who scored higher in tests of motor and mental development at age 2. A more recent (and unpublished) study of Di­Pietro’s suggests a biological mechanism: the 2-week-old infants of women who experience relatively more stress during pregnancy showed faster neural conduction, “evidence of a more mature brain.”

Paul puts stress into what she calls the “profoundly unsatisfying” category of “it depends.” “Most people, pregnant women and their fetuses likely included, do best when they have a moderate but manageable amount of stress in their lives,” she writes. But “such nuance is seldom found in the public discussion of stress during pregnancy, where fear and anxiety rule,” Paul writes.

Paul extends this point-counterpoint approach to her own work. After she wrote an articlein The New York Times Magazine about the possible connection between maternal obesityand the child’s obesity later in life, Darshak Sanghavi, a pediatric cardiologist at theUniversity of Massachusetts, took her to task in Slate for contributing to a “blame the victim” mentality that reduces complex social and public health problems to a matter of “failed gestation.”

(He also cited the “hysteria” over so-called crack babies — an example that Paul takes on in her book, noting that the long-term effects of fetal exposure to crack have turned out to be far more subtle than those of exposure to alcohol and tobacco.) Paul writes how she invited Sanghavi out to breakfast, and here makes it clear that she does not believe that the new data on the fetal origins of adult disease means we should give up on trying to improve lives after birth.

“Prenatal experience doesn’t force the individual down a particular path,” she writes. “At most, it points us in a general direction, and we can take another route if we choose. Imagine water flowing downstream: prenatal influences might dig a canal, so to speak, making it easier for the water to flow one way rather than another.” With effort, “we may be able to channel our fates in a different direction. The theory of fetal origins ought to contribute to complexity, not reduce it; if we take care in how we think about prenatal influences, they may add another layer to our understanding of who we are and how we got to be this way.”

The science she describes may be ambiguous, but on this point Paul is absolutely right: there is so much that can change after a child enters your arms.

Jerome Groopman is a professor of medicine at Harvard, a staff writer for The New Yorker and the author, most recently, of “How Doctors Think.”