Mark down February 14th, 2012 as the day when exoskeletons became an established medical therapy. 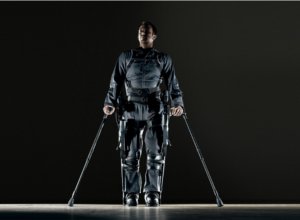 Ekso Bionics, formerly Berkeley Bionics and creators of the HULCarmy exoskeleton, have delivered their first commercial lower body system to Craig Hospital in Denver Colorado. The Ekso medical exoskeleton supports the body while moving the user’s legs for them. In other words, Ekso lets paraplegics walk again. Coming out of a ten month investigational study performed across the country, the lower body exoskeleton has been proven safe, but more importantly it’s shown to be an effective means of getting paralyzed patients up and moving, possibly with large long term physical and psychological benefits. The set of robotic legs delivered to Denver is just the first of many for Ekso. Could this be the start of a new era in treating spinal injuries?

Along with its first completed sale, Ekso released a promotional video for their exoskeleton that summarizes the journey the company took to get their robot legs on patients in need:

In the ongoing process of testing and improving their lower body exoskeleton, Ekso has recruited volunteers with spinal injuries to become “test pilots”. The following video describes the impact that walking again has on one of those pilots, more such stories can be found on the Ekso site:

Before Ekso passed through all the hoops required by the FDA for their exoskeleton to be sold, the company partnered with ten rehabilitation centers around the US to perform extensive tests on its use. Over ten months, Ekso (then Berkeley Bionics) worked with its partners to give 70 paraplegic patients an opportunity to walk again in controlled physical therapy sessions. 63 of those patients were able to participate in walking an average of 200 steps during each encounter. In total the study patients were walking 4000 to 5000 steps a week, giving Ekso (and its partners) plenty of experience to determine the safety and even the efficacy of the robotic legs. Singularity Hub was fortunate to attend one of the training sessions in Santa Clara, California, and I can attest that the experience was as impressive for its emotional impact as its technological success.

Ekso’s CEO, Eythor Bender, has trumpeted the commercial launch of the exoskeleton as both a fulfillment of past promises and an indication of future success. They said the Ekso (then called the eLegs) would be ready for Q1 2012, and it was. They said the study would allow for the people who would actually use the device (physical therapists and patients) the chance to improve the exoskeleton with their suggestions. Ekso has adjusted harnesses and control schemes on the system to meet with their comments. They hoped the robotic legs could impact everyone that used it, and they have received enormously positive feedback. Bender recently spoke at Singularity University’s FutureMed Executive Program about Ekso, inviting several of their test pilots to demonstrate and share their experiences. Here’s a taste of that presentation:

Ekso is not the only company that has worked with getting paraplegics walking again, but it is the one with seemingly the best foundation for wide-adoption in the US. Craig Hospital is just one of the ten rehabilitation centers where Ekso was tested – it’s likely the other nine may look to purchase a commercial unit soon. The Ekso system could appear in hospitals and spinal injury centers all around the nation in the months ahead.

Which is a very exciting prospect for those who suffer from catastrophic injuries to their back. We know now that Ekso is a safe way to get paraplegics on their feet, and that it is emotionally rewarding to those who use it. What is still to be determined quantitatively, but is heavily suggested by anecdotal evidence, is that assisted walking using the robotic legs may provide enormous long term health benefits including increased musculature, better gastrointestinal health, and improved circulation. Ekso hasn’t spelled this out directly, but doctors at Santa Clara even suggested that immediate therapy using an exoskeleton may provide at least some hope for neural regeneration. That is, that getting back up on your legs very soon after a spinal injury may increase chances of reclaiming some sensation or control. That’s an amazing (albeit very preliminary) possibility.

Even if a walking exoskeleton provides no other benefits than giving a patient the chance to move around independently at their old height, it could still be a very popular tool at rehabilitation centers across the country. Ekso may be on the verge of something big. In the next decade they, and their competitors in the US and abroad, will continue to bring medical exoskeletons into mainstream healthcare. Someday these devices will be commonplace in physical therapy sessions, and will hopefully make their way into homes and offices as well. Who knows, as exoskeleton technology continues to improve we may even see them become fast, efficient, and powerful enough to give patient’s back their full range of motion. That’s a wonderful possibility for the future, and now Ekso has taken a giant step in that direction.