Lab-Grown Burger To Be Served In Six Months

A number of laboratories around the world are trying to grow meat in a Petri dish. 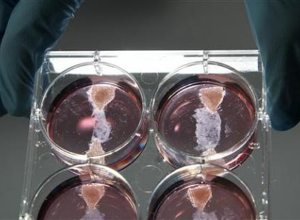 So far we’ve heard about clumps of cells grown from stem cells with the hope that those cells will one day grow into a full-sized, grill-ready chicken fillet or hamburger. Now one researcher says the time to fire up the propane is fast approaching. Researcher Mark Post announced to his in vitro meat producing colleagues that his lab will have a hamburger fit for consumption sometime this fall.

Did you say you wanted cheese on that?

Post made the announcement a few weeks ago at the annual meeting for the American Association for the Advancement of Science in Vancouver. He said the lab is still growing the small slabs of cow skeletal muscle, but by the fall they’ll have enough tissue to piece them together into a hamburger.

Cultured meat begins with muscle cells taken from the rear of a cow for sirloin steak, for instance, or from the area surrounding a pig’s spine for growing pork chops. The cells are then placed in a nutrient mixture that helps them to proliferate. A biodegradable scaffold guides the cells as they grow together to eventually form muscle tissue. Making a hamburger requires joining these pieces of tissue into a coherent whole.

It’s unclear how long the lab has been growing their bits of burger, but given the amount of time needed to make just one hamburger we’re pretty much guaranteed a long wait before sleeves of artificially grown patties show up at the supermarket. Even if taste and nutritional value is comparable to that of normal burgers, we’re still probably years away from being able to grow cultured meat cost-effectively and in amounts large enough to make an impact on world consumption. Post’s hamburger is funded to the tune of 250,000 euros from an anonymous private investor.

But when we do, we may find ourselves at the start of a food revolution.

Late last year the Earth’s population reached 7 billion. By 2050, that number’s expected to reach 9 billion. How to feed so many people, especially countries like the US which consume twice the global average? Population growth makes it ever more imperative to find more efficient – and more humane – ways to feed our love for meat.

In 1961 the world’s total meat supply was 71 million tons. By 2007 we were gorging more than twice that per capita and the supply had reached 284 million tons. And even though the population will increase by about a third by 2050, the world’s total meat consumption is expected to double in the same amount of time. Americans account for about 5 percent of the world’s population but eat about 15 percent of its total meat. Nearly 10 billion animals are grown and killed for food in the US each year (New York Times writer Mark Bittman specifies that the word “raise” would be incorrect to describe what happens to animals at factory farms). According to these figures, every year about 67 billion animals are slaughtered for meat worldwide.

It takes resources to sustain such prodigious numbers. Livestock production is estimated to use up 30 percent for the world’s ice-free land and produce almost a fifth of the world’s greenhouse gases, more than the amount produced by global transportation.

Needless to say, growing cultured meat in a lab would be a desirable alternative to factory farms. Not only is treating the animals more ethically and reducing carbon emissions desirable, but according to Post, cows and pigs are the least efficient among all livestock to convert to food with a bioconversion efficiency of 15 percent. PETA, obviously in favor of not killing animals for food, is encouraging scientists by offering $1 million to anyone able to bring in vitro chicken meat to the market.

Hopefully when Post’s hamburger is ready his lab will have better luck than Vladimir Mironov whose administrative run-ins kept him from a taste test last year. And if the faux burger turns out to be just as good as the real thing, overcoming the technological hurdles to producing them in a cost-effective way will be a delicious challenge I hope the whole field can’t resist.