Robotic legs may get paraplegics walking again, and in more ways than one. 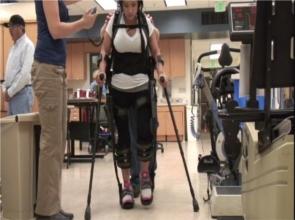 Exoskeleton startup Berekely Bionics has partnered with ten of the top physical rehabilitation centers in the United States to test their eLegs walking system. eLegs, which consists of a lower body exoskeleton with a backpack style control and battery unit, can bear the weight of a human user, allowing him or her to take steps using only the power of the device. In other words, eLegs allows paraplegics to walk.

It’s freakin’ amazing, and I had a chance to see it in person recently at the Santa Clara Valley Medical Center. Watch as one of the eLegs test patients, Stephanie Sablan, walks and talks in the video below. Set to hit the market in early 2012, eLegs could help the paralyzed spend more time out of their wheelchairs. More than freedom, the exoskeleton could also be a key component of maintaining their health and perhaps even taking a few steps towards neurological recovery.

Stephanie Sablan has been paralyzed since January of this year after an auto accident caused by her texting while driving. Determined to make the most of her misfortune, she began physical rehabilitation just three days after her accident. Starting in May that rehab included half hour sessions once a week using eLegs. The following video was shot on her final day of eLegs rehab, in late June. Quite the charmer, you can see Sablan is also working hard during the trial.

While not in direct control of eLegs (its operated by the physical therapist) she must maintain her balance using her torso and arms. eLegs, which weighs 45 lbs, supports its own weight, and the weight of the user, but still requires the active work of the patient to work properly. Sablan manages wonderfully, even if making turns seems like it was a real pain in the neck.

Full HD is available, and I apologize for the loud background noise but this was a real training session, not a press event.

The creators of the HULC exoskeleton for the US Army, Berkeley Bionics (and Lockheed Martin) have often shown their exos in dynamic motion, augmenting human efficiency and endurance. Even the eLegs demos we’ve seen have highlighted the triumph and power a paraplegic user feels when stepping into the device and walking for the first time. I can’t argue with that image because it is an emotionally impacting and accurate one. But I wanted you all to see something a little different in the video above.

This is a device that takes hours of hard work to master, and that hard work is actually part of what makes them so useful. Yes, eventually eLegs may be able to act as another kind of assistance device, an alternative to the wheelchair which helps the paralyzed regain their height and standing in society. More importantly, however, eLegs could possibly revolutionize physical rehabilitation. We may be looking at a game-changer here, folks.

Appearing at 4:43in the video is Dr. Akshat Shah, Santa Clara’s Chief of Spinal Cord and Orthopedic Rehabilitation. He described to me the goals and preliminary results of the eLegs trial. Currently, Santa Clara is about halfway through their tests, with an expected total of 6-10 patients. Too small of a study to see how eLegs affects patients neurologically, the trial is mainly set to establish safety of the device. Which it has done, hands down.

Shah says that with easy access to Berkeley Bionics staff (Santa Clara is the only one of the ten test facilities in California, and the one whose patients will get the most time with the device) they’re looking to see how therapists can best use eLegs, how training sessions should be built, and if/when control can be passed to the patient directly. Ten facilities in the US (including Hawaii) will test eLegs this year. All should have their own set by early 2012 when the device is hoped to reach market.

Why all this work to see how eLegs works in the rehab setting? While eLegs, and many of its competing exoskeletons, have been marketed as freedom-enabling devices for paraplegics, that’s really only one benefit. Shah tells me that “early acute intervention” is a critical component for recovery in patients with traumatic spinal injury. In other words, you want patients in rehab as soon as feasible, often just a week after injury and surgery. The earlier and faster you can get a patient ‘on the mat’ the less muscle loss they will experience, and the better their chance for some neuroregeneration and neurological recovery.

Yes, walking with eLegs can be a life-changing and hope-providing opportunity, but its advantages go far beyond the emotional and psychological. Standing upright (in a harness) has been shown to improve circulation, muscle maintenance, bowel regularity, and even provide some neurological benefits to those regularly confined to wheelchairs. The truth is we don’t know what years of regularly walking with robotic legs will do for paraplegics, but there’s at least some chance that it could actually help them recover to some degree.

That blows my mind.

And Shah thinks it could help with patients suffering from multiple sclerosis, arthritis, and strokes. This is all looking a little far ahead, but the question isn’t if we should get all these people into exoskeletons, the question is how. Berkeley Bionics is now aiming to get eLegs on the market by early 2012, and has the funding and production in place to get those units shipped.

Yet it seems that every rehabilitation center in the nation, and the world, will want a copy. That’s just the professional market. If Stephanie Sablan is any indication, once patients get a taste of eLegs they’re going to want their own pair to take home. Berkeley Bionics will need to find a way to provide for this market, as well as make eLegs affordable to both facilities and (eventually) individuals.

Pilot trials now, rehab centers receiving their own devices next year, and individuals getting eLegs in some point in the future (hopefully 2013 as Bender suggests). Berkeley Bionic’s exoskeleton has a bright future that is approaching rapidly. While other competitors are already on the market to some degree, it’s still anybody’s guess as to which will make the biggest splash. Whether it’s eLegs or another device, medical exoskeletons could be the biggest innovation in spinal cord treatment in the past twenty years. Beyond that exoskeletons could revolutionize the military, elder care, extreme sports, and beyond. As Eythor asks, “why not bionics for everyone?”

*Special thanks to Beverly Milson at Missing Sock for putting all the ducks in a row, and Clay Robeson for technical help (aka shooting those ducks).