by Carl Zimmer:  The Earth has nine biophysical thresholds beyond which it cannot be pushed without disastrous consequences, the authors of a new paper in the journal Nature report. 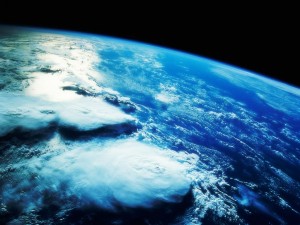 Ominously, these scientists say, we have already moved past three of these tipping points.  Human civilization has had a stable childhood. Over the past 10,000 years, as our ancestors invented agriculture and built cities, the Earth remained relatively stable. The average global temperature fluttered slightly, never lurching towards a greenhouse climate or chilling enough to enter a new Ice Age. The pH of the oceans remained steady, providing the right chemical conditions for coral reefs to grow and invertebrates to build shells. Those species, in turn, helped support a stable food web that provided plenty of fish for us humans to catch. The overall stability of the past 10,000 years may have played a big part in humanity’s explosion.

Now, ironically, civilization has become so powerful that it can reshape the planet itself. “We have become a force to contend with at the global level,” as Johan Rockstrom of the Stockholm Resilience Center in Sweden, puts it. Humans have changed the chemistry of Earth’s oceans, lowering their pH and causing ocean acidification. We are shifting the composition of the atmosphere, raising levels of carbon dioxide higher than they’ve been in at least the past 800,000 years.

A number of scientists have warned in recent years that if we keep pushing the planet this way, we will cause sudden, irreversible damage to the

systems that made human civilization possible in the first place. Typically, they’ve just focused on one of these tipping points at a time. But in today’s issue of the journal Nature, Rockstrom and 27 of his fellow environmental scientists argue that we have to conceive of many tipping points at once. They propose that humans must keep the planet in what they call a “safe operating space,” inside of which we can thrive. If we push past the boundaries of that space — by wiping out biodiversity, for example, or diverting too much of the world’s freshwater — we risk catastrophe.

Unfortunately, the authors of the Nature paper maintain, we’ve already started pushing out beyond these boundaries without knowing where they actually are. “We’re sitting on top of a mesa right now, and we’re driving around, but we don’t have our lights on and we don’t even have a map,” says Jonathan Foley, a co-author of the new study and the director of the University of Minnesota’s Institute on the Environment. “That’s a dangerous way to move around.”

In their new study, Foley and his colleagues put down stakes to mark where they believe seven of these boundaries lie. By their estimate, we have already pushed beyond three of these boundaries, and are moving quickly toward the other four. “We’re running out of time,” says Rockstrom.

The new paper has already drawn strong reactions from other scientists, some glowing, some harsh. “This kind of work is critically important,” says Christopher Field, the director of the Department of Global Ecology at the Carnegie Institution at Stanford University. “Overall, this is an impressive attempt to define a safety zone.”

But other scientists wonder whether a planetary safety zone is a concept worth bothering with. “I don’t think this is in any way a useful way of thinking about things,” says Stuart Pimm, a conservation biologist at Duke University. 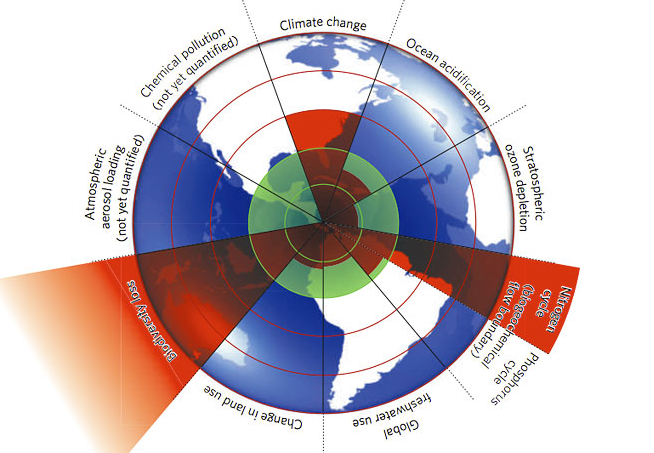 Rockstrom and his colleagues developed the concept of planetary boundaries from earlier work on how natural systems change. Those changes are sometimes gradual, but they can also come in jolts. A lake, for example, can absorb a fair amount of phosphorus from fertilizer runoff without any sign of change. “You add a little, not much happens,” says Shahid Naeem of Columbia University, who was not involved in the Nature paper. “Add a little more, not much happens. Add a little… then, all of sudden, you add a little more and — boom! — phytoplankton bloom, oxygen depletion, fish die-off, smelliness. Remove the little phosphorus that caused the tipping of the system, and it does not reverse. In fact, you have to go back to much cleaner water than you would have imagined.”

In recent years, some scientists have argued that the entire planet behaves in a similar way. Adding extra greenhouse gases can raise the planet’s temperature in a steady, proportional rate. But there may come a point when the climate will get pushed into a drastically new state. Some climate scientists have argued, for example, that global warming may trigger the runaway collapse of ice sheets in Greenland and Antarctica. Even if we then immediately stopped emitting greenhouse gases, the ice sheets would keep collapsing into the sea. And then we couldn’t do anything to reverse the change. “We don’t know how to refreeze the Greenland ice sheet,” says Rockstrom.

Rockstrom helped organize a workshop in Stockholm in April 2008 where environmental scientists talked about the other possible thresholds that might exist on a global scale. They concluded that there was good evidence for nine kinds of thresholds: climate change, ocean acidity, the ozone layer, freshwater use, the movement of nitrogen and phosphorus, the amount of land used for crops, aerosols (haze and other particles), biodiversity, and chemical pollution.

The scientists then reviewed each of those factors to mark boundaries that the world should not push beyond. “The idea is to say, ‘Let’s put up some guard rails,’” says Robert Costanza of the University of Vermont. “Maybe the guard rails are for a slope we could have taken and survived, but maybe not. We owe it to human civilization to be more careful.”

Ultimately, the scientists felt confident in estimating seven boundaries, three of which we have already pushed past. For one thing, they argue, we’ve already put too much carbon dioxide in the atmosphere. James Hansen, a NASA climate scientist and co-author of the Nature paper, has argued that to avoid catastrophic melting of ice sheets, we should keep carbon dioxide levels no higher than 350 parts per million. Before the Industrial Revolution, the concentration was at about 280 parts per million, but today we’re up to 387. In other words, we’ve moved out of the safe operating space — and into risky territory.

The scientists also argue that as we spread fertilizer on farmland and burn coal, we are pumping far too much nitrogen into the environment. Human activity releases 121 million tons of nitrogen, much of which ends up polluting rivers, lakes and oceans and potentially pushing their ecosystems into irreversible changes. At most, the scientists argue, less than 35 million tons of nitrogen would be a safe boundary.

In five other areas, the scientists found, we have not yet crossed the boundary into the danger zone. As we release carbon dioxide, for example, some of it goes into the oceans and makes it more acidic. In acidic seawater, coral reefs have a harder time building skeletons, because the minerals they produce for their skeletons quickly dissolve. Invertebrates have the same trouble making shells. According to recent surveys, the ocean is now acidifying 100 times faster than at any time during the past 20 million years. Yet the Nature co-authors estimate that we have not yet reached the point where acidity may cause ecological collapse. But we are close.

While the paper makes for a sobering read, its authors think we should also find some cause for optimism in it. Humanity nearly crossed another threshold by destroying the ozone layer with chlorofluorocarbons. But we recognized the crisis in time and banned chlorofluorocarbons, allowing the ozone layer to slowly recover. If we had waited much longer we might have been too late to do anything. “We were able to avoid a global disaster,” says Rockstrom. He hopes we can do the same again, and keep human civilization from falling off the environmental mesa.

“The authors make a strong case for their selection of key boundaries,” says the Carnegie Institution’s Christopher Field, “and the proposed locations for the boundaries are conceptually reasonable.” Field said he would not be surprised if other researchers argue for shifting the boundaries based on further research. “But most would agree with the general theme that we are pushing very hard on the Earth system, so hard that we should not be surprised if key parts begin to break.”

Other researchers agree with the basic concept of the new paper, but question whether we should be trying to pin down planetary boundaries. Michael Mann, a climate scientist at Penn State University, agrees that

there probably is a dangerous threshold for climate change, but he thinks that 350 parts per million might be too strict a limit. And on a practical level, Mann points out that the policies being considered by the U.S. Congress probably won’t even be able to keep carbon dioxide levels down to 550 parts per million in 2100. “I sometimes worry that there is the danger that if we dramatically move the goalposts and argue that 350 ppm must be the stabilization target, policymakers will just throw their hands up in futility,” says Mann, or reach instead for a quick-fix geoengineering scheme, “which frankly terrifies me.”

But some critics question the basic concept itself. “The notion of a single boundary is just devoid of serious content,” says Stuart Pimm. “In what way is an extinction rate 10 times the background rate acceptable?”

One reason that the concept of planetary boundaries is so provocative is that it highlights how much scientists don’t yet understand about the thresholds built into our planet. “I think this is interesting and I’m glad the paper is coming out,” says Naeem, “but it could lead to the false sense that we understand the biosphere better than we do.”

Carl Zimmer writes about science for The New York Times and a number of magazines. A 2007 winner of the National Academies of Science Communication Award, Zimmer is the author of six books, includingMicrocosm: E. coli and the New Science of Life. In previous articles for Yale Environment 360, he has written about the high-tech search for a cleaner biofuel alternative and about using assisted migration to save species threatened by climate change.

MORE BY THIS AUTHOR

‘Nature’ Report a Reminder of the Limits to Growth
It has been more than 30 years since a groundbreaking book predicted that if growth continued unchecked, the Earth’s ecological systems would be overwhelmed within a century. Bill McKibben writes that the new ‘Nature’ study should serve as an eleventh-hour warning that cannot be ignored.

As Climate Warms, Species May Need to Migrate or Perish
With global warming pushing some animals and plants to the brink of extinction, Carl Zimmer writes that conservation biologists are now saying that the only way to save some species may be to move them.