The South by Southwest Festival and Conference’s panels see traditional questions about musical artistry give way to discussions about how to monetize the music. 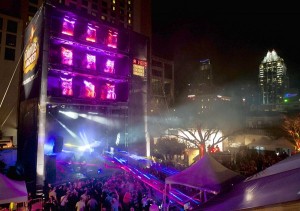 A six-story-tall Doritos vending machine served as the backdrop for performances by artists such as Snoop Dog, White Denim and Mystikal at last week’s South by Southwest Festival and Conference in Austin, Texas.

It was perhaps the most impressive display of corporate sponsorship at the annual festival, which started out 25 years ago as a way to showcase indie bands but has since become a massive, mainstream music event. Chevrolet, Pepsi and FreeCreditScore.com were among 10 official sponsors of the festival, while Taco Bell, Marlboro and Spotify joined other big business names whose banners adorned Austin’s dozens of live music stages.

At daytime panels, traditional questions about musical artistry gave way to discussions about how labels, agents and managers can monetize the music.

The music portion of SXSW is five days of nearly constant music, with nightly showcases and all-day parties thrown by everyone from shoe companies to streaming services. More than 2,000 acts made the trek to perform at one of more than 90 venues, hoping to gain a little momentum, a bit of press and, if lucky, a gig — an offer to play a party with corporate backing.

A few up-and-coming acts were able to command as much as $50,000 for headlining shots at some of SXSW’s parties.

For those who didn’t get the big money gigs, there were still some encouraging economic indicators. Jeff Price, who runs the online distribution company Tunecore, said that in fall 2011, his distributor alone earned $200,000 for on-demand online streaming services, a group that includes streaming services such as Spotify, Rhapsody and Rdio. That’s a more than tenfold increase in one year.

Spotify was one of the employers, renting out an Austin rooftop to showcase the electronic sounds of Grimes and an Austin coffeehouse to present the rootsy M. Ward. Spotify board member (andNapster co-founder) Sean Parker said the company was on pace to soon become a label’s No. 1 revenue source. “We’ll overtake iTunes in terms of what we bring to the record industry in under two years,” Parker said.

That didn’t prevent all sniping, though. Several music industry veterans complained that, while labels may get a return on revenue, artists don’t.

There seem to be more ways than ever for the independent artist to bring in cash. The Future of Music Coalition, an artist lobbying group, announced during SXSW the results of two years of research into how musicians make money. Jean Cook, one of the architects of the project, said the research revealed 42 potential music revenue sources. No single artist is, of course, benefiting from all 42. A classical artist, for instance, may have access to only two or three, she said. But a singer-songwriter may be able to pull from as many as 25 revenue streams.

In addition to the expected sources — such as sales to streaming services, branded merchandise, concert ticket sales or, in the case of symphony musicians, employment — the Future of Music Coalition also found that artists make money from teaching, speaking engagements, fan-funding, acting, YouTube partnerships, persona licensing, session musician work and myriad national and international publishing groups. More than 5,000 participated in the survey, and nine provided the coalition with detailed financials from the last four to 12 years.

Among the other Austin revelations: A full-time jazz band member makes three times as much money in foreign territories as in the United States, and the artist’s average income is just more than $55,000.

Tom Windish of the Chicago booking firm Windish Agency, whose clients did between 500 and 1,000 shows at this year’s SXSW, said Austin itself may be a new moneymaker for some bands.

“There’s more money being spent to pay bands than before,” Windish said. “Used to be there was none. Then there was some. Now there’s more.”