Pets do like music, but prefer their own picks

Many pet owners leave their home radios playing all day for the listening pleasure of their dogs and cats. 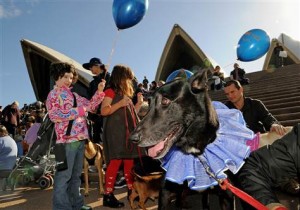 Dogs and their owners gather on the steps of the Sydney Opera House on June 5, 2010 for a world first “Music for Dogs” concert, the brainchild of New York performance artist Laurie Anderson. Almost 1,000 dog-lovers packed onto the Opera House steps and forecourt to treat their beloved pets to the free outdoor event, which is part of the Vivid LIVE arts festival curated by Anderson and rock legend partner Lou Reed.

Station choices vary. “We have a very human tendency to project onto our pets and assume that they will like what we like,” said Charles Snowdon, an authority on the musical preferences of animals. “People assume that if they like Mozart, their dog will like Mozart. If they like rock music, they say their dog prefers rock.”

Against the conventional wisdom that music is a uniquely human phenomenon, ongoing research shows that animals actually do have the capacity for music. But rather than liking classical or rock, Snowdon, an animal psychologist at the University of Wisconsin-Madison, has discovered that animals march to the beat of a different drum altogether. They enjoy what he calls “species-specific music”: tunes specially designed using the pitches, tones and tempos that are familiar to their particular species.

With no pun intended, music is all about scale: Humans like music that falls within our acoustic and vocal range, uses tones we understand, and progresses at a tempo similar to that of our heartbeats. A tune pitched too high or low sounds grating or ungraspable, and music too fast or slow is unrecognizable as such.

To animals, human music falls into that grating, unrecognizable category. With vocal ranges and heart rates very different from ours, they simply aren’t wired to enjoy songs that are tailored for our ears. Studies show that animals generally respond to human music with a total lack of interest. With this general rule in mind, Snowdon has worked with cellist and composer David Teie to compose music that is tailored to suit them.

Back in 2009, the researchers composed two songs for tamarins — monkeys with vocalizations three octaves higher than our own and heart rates twice as fast. The songs sound shrill and unpleasant to us, but they seem to be music to the monkeys’ ears. The song modeled on excited monkey tones and a fast tempo made the tamarins visibly agitated and active. By contrast, they calmed down and became unusually social in response to a “tamarin ballad,” which incorporated happy monkey tones and a slower tempo.

Snowdon and Teie have moved on to composing music for cats, and studying how they respond to it.

“We have some work-in-progress where we’ve transposed music and put it in the frequency range for cat vocalizations, and have used their resting heart rate, which is faster than ours,” he told Life’s Little Mysteries. “We find that cats prefer to listen to the music composed in their frequency range and tempo rather than human music.”

On the basis of their results, Teie has started selling cat songs online (at $1.99 per song) through a company called “Music for Cats.”

Dogs are tougher nuts to crack, mostly because breeds vary widely in size, vocal range and heart rate. However, large dogs such as Labradors or mastiffs have vocal ranges that are quite similar to those of adult male humans. “So, it is possible that they might be responsive to music in our frequency range. My prediction is that a big dog might be more responsive to human music than a smaller dog such as a Chihuahua,” Snowdon said. [ Dogs Play the Piano in New Video ]

Considering the great demand for new ways to please our pets, more progress is likely to be made in the field of animal music. But no matter how well composers perfect their dog, cat and monkey songs, the animals will probably never appreciate their species-specific music quite as much as humans appreciate ours. According to Snowdon, they lack an important musical ability that we possess: relative pitch.

“We can recognize that a sequence of notes is the same whether it’s in the key of F or A flat,” he said. “I have found that animals have very good absolute pitch, but they don’t have relative pitch. They can learn to recognize a sequence of notes, but if you transpose the notes to a different key, so that the sequence uses the same relative notes but the key is different, they can’t recognize the relationships between the notes anymore.”

He added, “To that extent, we understand music in a different way than animals do.”