Artificial Intelligence Could Be on Brink of Passing Turing Test

One hundred years after Alan Turing was born, his eponymous test remains an elusive benchmark for artificial intelligence. Now, for the first time in decades, it’s possible to imagine a machine making the grade. 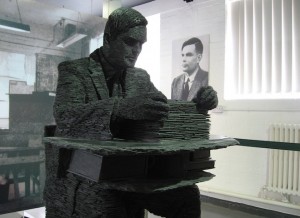 Turing was one of the 20th century’s great mathematicians, a conceptual architect of modern computing whose codebreaking played a decisive part in World War II. His test, described in a seminal dawn-of-the-computer-age paper, was deceptively simple: If a machine could pass for human in conversation, the machine could be considered intelligent.

Artificial intelligences are now ubiquitous, from GPS navigation systems and Google algorithms to automated customer service and Apple’s Siri, to say nothing of Deep Blue and Watson — but no machine has met Turing’s standard. The quest to do so, however, and the lines of research inspired by the general challenge of modeling human thought, have profoundly influenced both computer and cognitive science.

There is reason to believe that code kernels for the first Turing-intelligent machine have already been written.

“Two revolutionary advances in information technology may bring the Turing test out of retirement,” wrote Robert French, a cognitive scientist at the French National Center for Scientific Research, in an Apr. 12 Science essay. “The first is the ready availability of vast amounts of raw data — from video feeds to complete sound environments, and from casual conversations to technical documents on every conceivable subject. The second is the advent of sophisticated techniques for collecting, organizing, and processing this rich collection of data.”

“Is it possible to recreate something similar to the subcognitive low-level association network that we have? That’s experiencing largely what we’re experiencing? Would that be so impossible?” French said.

When Turing first proposed the test — poignantly modeled on a party game in which participants tried to fool judges about their gender; Turing was cruelly persecuted for his homosexuality –  the idea of “a subcognitive low-level association network” didn’t exist. The idea of replicating human thought, however, seemed quite possible, even relatively easy.

The human mind was thought to be logical. Computers run logical commands. Therefore our brains should be computable. Computer scientists thought that within a decade, maybe two, a person engaged in dialogue with two hidden conversants, one computer and one human, would be unable to reliably tell them apart.

That simplistic idea proved ill-founded. Cognition is far more complicated than mid-20th century computer scientists or psychologists had imagined, and logic was woefully insufficient in describing our thoughts. Appearing human turned out to be an insurmountably difficult task, drawing on previously unappreciated human abilities to integrate disparate pieces of information in a fast-changing environment.

“Symbolic logic by itself is too brittle to account for uncertainty,” said Noah Goodman, a computer scientist at Stanford University who models intelligence in machines. Nevertheless, “the failure of what we now call old-fashioned AI was very instructive. It led to changes in how we think about the human mind. Many of the most important things that have happened in cognitive science” emerged from these struggles, he said.

By the mid-1980s, the Turing test had been largely abandoned as a research goal (though it survives today in the annual Loebner prize for realistic chatbots, and momentarily realistic advertising bots are a regular feature of online life.) However, it helped spawn the two dominant themes of modern cognition and artificial intelligence: calculating probabilities and producing complex behavior from the interaction of many small, simple processes.

Unlike the so-called brute force computational approaches seen in programs like Deep Blue, the computer that famously defeated chess champion Garry Kasparov, these are considered accurate reflections of at least some of what occurs in human thought.

As of now, so-called probabilistic and connectionist approaches inform many real-world artificial intelligences: autonomous cars, Google searches, automated language translation, the IBM-developed Watson program that so thoroughly dominated at Jeopardy. They remain limited in scope — “If you say, ‘Watson, make me dinner,’ or ‘Watson, write a sonnet,’ it explodes,” said Goodman — but raise the alluring possibility of applying them to unprecedentedly large, detailed datasets.

“Suppose, for a moment, that all the words you have ever spoken, heard, written, or read, as well as all the visual scenes and all the sounds you have ever experienced, were recorded and accessible, along with similar data for hundreds of thousands, even millions, of other people. Ultimately, tactile, and olfactory sensors could also be added to complete this record of sensory experience over time,” wrote French in Science, with a nod to MIT researcher Deb Roy’s recordings of 200,000 hours of his infant son’s waking development.

He continued, “Assume also that the software exists to catalog, analyze, correlate, and cross-link everything in this sea of data. These data and the capacity to analyze them appropriately could allow a machine to answer heretofore computer-unanswerable questions” and even pass a Turing test.

Artificial intelligence expert Satinder Singh of the University of Michigan was cautiously optimistic about the prospects offered by data. “Are large volumes of data going to be the source of building a flexibly competent intelligence? Maybe they will be,” he said.

“In order to be broadly and flexibly competent, one needs to have motivations and curiosities and drives, and figure out what is important,” he said. “These are huge challenges.”

Should a machine pass the Turing test, it would fulfill a human desire that predates the computer age, dating back to Mary Shelley’s Frankenstein or even the golems of Middle Age folklore, said computer scientist Carlos Gershenson of the National Autonomous University of Mexico. But it won’t answer a more fundamental question.

“It will be difficult to do — but what is the purpose?” he said.