Buddha on the Brain

By John Geirland:  The Dali Lama has a cold. He has been hacking and sniffling his way around Washington, DC, for three days, calling on President Bush and Condoleezza Rice and visiting the Booker T. Washington Public Charter School for Technical Arts. 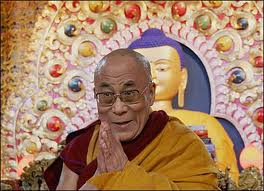 Now he’s onstage at the Washington Convention Center, preparing to address 14,000 attendees at the Society for Neuroscience’s annual conference.

The mood is tense. The State Department Diplomatic Security Service has swept the hallways for explosives. Agents stand at their posts.

The 14th incarnation of the Living Buddha of Compassion approaches the podium, clears his throat, and blows his nose loudly. “So now I am releasing my stress,” he says. The audience dissolves into laughter.

The Dalai Lama is here to give a speech titled “The Neuroscience of Meditation.” Over the past few years, he has supplied about a dozen Tibetan Buddhist monks to Richard Davidson, a prominent neuroscience professor at the University of Wisconsin-Madison. Davidson’s research created a stir among brain scientists when his results suggested that, in the course of meditating for tens of thousands of hours, the monks had actually altered the structure and function of their brains. The professor thought the Dalai Lama would make an interesting guest speaker at theSociety for Neuroscience‘s annual meeting, and the program committee jumped at the chance. The speech also gives the Tibetan leader an opportunity to promote one of his cherished goals: an alliance between Buddhism and science.

But the invitation has sparked a noisy row within the neuroscience community. To protest the talk, some scientists set up an online petition, which was immediately hacked by the pro-Dalai Lama faction. Others are boycotting the event or withholding their conference papers. Still others have demanded – unsuccessfully – time for a rebuttal.

All of which may explain the lama’s ailment. “His Holiness’ cold is a manifestation of the opposition of some scientists to his coming to the conference,” a young Chinese Buddhist explains to me.

The protesters complain that the Tibetan leader isn’t qualified to speak about brain science. They fret that he’ll draw media attention away from important findings presented at the conference. Worst of all, his presence muddles the distinction between objective inquiry and faith. “We don’t want to mix science and religion in our children’s classrooms,” says Bai Lu, a researcher at the National Institutes of Health, “and we don’t want it at a scientific meeting.”

One of the petition organizers, Lu Yang Wang, is even more blunt: “Who’s coming next year?” he asks. “The pope?”

Richard Davidson, 54, is at once a distinguished scientist and an avid spiritual seeker. He became fascinated with meditation in the ’60s. As a graduate student at Harvard, he channeled that interest into the study of psychology and neuroscience. In his spare time, he hung out with Ram Dass, Timothy Leary’s former LSD research partner turned mystic. Davidson traveled to India for a meditation retreat, then finished his doctorate in biological psychology and headed to the University of Wisconsin, where he now directs the Waisman Laboratory for Brain Imaging and Behavior.

The Dalai Lama learned of Davidson’s work from other scientists and in 1992 invited him to Dharamsala, India, to interview monks with extensive meditation experience about their mental and emotional lives. Davidson recalls the “extraordinary power of compassion” he experienced in the Dalai Lama’s presence.

A decade later, he got a chance to examine Tibetan Buddhists in his own lab. In June 2002, Davidson’s associate Antoine Lutz positioned 128 electrodes on the head of Mattieu Ricard. A French-born monk from the Shechen Monastery in Katmandu, Ricard had racked up more than of 10,000 hours of meditation.

Lutz asked Ricard to meditate on “unconditional loving-kindness and compassion.” He immediately noticed powerful gamma activity – brain waves oscillating at roughly 40 cycles per second – indicating intensely focused thought. Gamma waves are usually weak and difficult to see. Those emanating from Ricard were easily visible, even in the raw EEG output. Moreover, oscillations from various parts of the cortex were synchronized – a phenomenon that sometimes occurs in patients under anesthesia.

The researchers had never seen anything like it. Worried that something might be wrong with their equipment or methods, they brought in more monks, as well as a control group of college students inexperienced in meditation. The monks produced gamma waves that were 30 times as strong as the students’. In addition, larger areas of the meditators’ brains were active, particularly in the left prefrontal cortex, the part of the brain responsible for positive emotions.

But Davidson saw something more. The monks had responded to the request to meditate on compassion by generating remarkable brain waves. Perhaps these signals indicated that the meditators had attained an intensely compassionate state of mind. If so, then maybe compassion could be exercised like a muscle; with the right training, people could bulk up their empathy. And if meditation could enhance the brain’s ability to produce “attention and affective processes” – emotions, in the technical language of Davidson’s study – it might also be used to modify maladaptive emotional responses like depression.

Davidson and his team published their findings in the Proceedings of the National Academy of Sciences in November 2004. The research made The Wall Street Journal, and Davidson instantly became a celebrity scientist.