From D.C. To Beijing In 2 Hours – Evacuated Tube Transport Could Revolutionize How We Travel

Daryl Oster wants to change the world by making it smaller.  He wants you to “Imagine living in warm sunny Los Angeles and commuting daily to New York City with only a forty-five minute commute.” 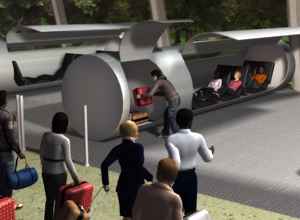 Or to “Imagine ordering Chinese food – from China.”  And he doesn’t need a spaceship to do it because, in a way, he’s bringing space travel to Earth. I got a chance to pick Oster’s brain about his revolutionary transport system. I learned very quickly, first and foremost, that it “is NOT a train!!!”

What it is is Evacuated Tube Transport, orETT. ETT combines the efficiency of maglev trains, already in use in Europe and Asia, with the efficiency of moving through an airless environment. Maglev is short for magnetic levitation. It takes advantage of physical properties that we all learned in grade school: that opposite poles of a magnet attract, like poles repel. For maglev trains, a magnetic field is generated by the guideway tracks that both levitates the train and, by placing attractive forces just so through “linear propulsion,” pulls it forward. Two key differences between maglevs and conventional trains is the frictionless floating over the tracks and the lack of an engine. While kicking back in an Amtrak car you’re not likely to go more than 80 mph. Maglevs can top 300 mph. And they would go so much faster if it weren’t for all that air slowing them down.

ETT does the maglevs one better by sending its levitated capsules down guider tubes out of which the air has been sucked, creating a vacuum. Like maglev vehicles, linear electric motors in the track will use the attraction and repulsion between the track and the capsules in a coordinated manner to propel the capsules forward. But because there is virtually no resistance in the evacuated tube, once the train gets up to speed it can just coast. Not only does ETT lack an engine – and a need for fossil fuel propulsion – but because it can glide along almost indefinitely through the vacuum it takes full advantage of Newton’s age-old “an object in motion stays in motion.” That is, until someone hits the brakes.

And the motion we’re talking about is seriously fast. If ETT does see the light of day it is estimated to travel at a top speed of 4,000 mph. That’s more than mach 5! More than only the fastest record-breaking jets! At 4,000 mph, a trip from Washington DC to Beijing would take just two hours.

I’ll take the Szechuan beef, extra spicy. And because of the low energy demands of floating along a frictionless magnetic cushion, Oster claims the trip will cost passengers a very reasonable $100.

And give me your finest bottle of rice wine.

Here’s a video summary of how the ETT would work.

Each capsule fits in the 1.5 meter-diameter tube and seats six passengers. Riders will have to recline a bit, but floating along the invisible magnetic cushion promises to be a quiet and smooth ride, according to Oster. But the capsules can transport cargo too.

Each capsule, which is about the size of a car and weighs 400 lbs, can carry up to 800 lbs of payload. According to Oster, that’s about the same capacity of an SUV weighing 4,000 lbs. “Since the vehicles are light,” he explained in an email, “the tubes can be built lightweight with minimal materials. By contrast a train locomotive weighs 100 tons, so 35 times more infrastructure materials per mile are needed to support the massive trains.”

The linear electric motor magnets that accelerate the capsules also brake them. With the amount of track it takes to launch and stop, the minimum radius for a trip is 400 miles. That’s about the distance from my home in Baltimore to my hometown Boston. At 4,000 mph, I can expect to see my relatives in about 6 minutes, plus or minus a minute to finish the news article I’m reading.

Of course, that’s not actually going to happen. The unimaginably high speed trips will be reserved for long distances, such as Washington to Beijing. Local ETT trips of 400 miles or more will cruise at 370 mph. Rather pedestrian compared to 4,000 mph, but still faster than China’s new Sword Train. I’d still reach Boston in just over an hour, just like flying.

But I’m not punching my ticket just yet. To say building the ETT will present some challenges is an understatement. Looks great on paper, but claims that it will cost 1/10th of a high-speed rail with 10 times the capacity, cost 1/4th as much as a freeway to build, and travel safely at 4,000 mph are audacious claims. I use the word “audacious” in the man-it-sounds-far-fetched-but-if-you-can-make-it-happen-you-would-change-the-world way. Even though all of the technologies the ETT requires already exist today, I don’t expect I’ll be ordering my extra spicy Szechuan beef for many years yet.

Still, if you’re like me, your imagination is going crazy right now with the possibilities of transworld travel at 4,000 mph. But not only the wonder of setting foot in Mumbai in under three hours, but also: What if something goes wrong?

I asked Oster how perfect the guideways have to be to safely transport capsules at 4,000 mph. “There is little margin for error. This is one of the considerations that limits practical speed. Even a small “bump” of an inch spread out over 100 feet could cause contact [between track and capsule] at 4,000 mph.” And at these incredible speeds, it isn’t only human error that needs to be considered.

“Since the earth moves more than this, active alignment is necessary, especially where crossing fault lines. The active alignment actuators must be capable of fast enough response to let the earth move without the tube reacting.” Is this a safety requirement we can reasonably expect? Oster is comfortable: “The required accuracy is not much different than alignment abilities already demonstrated.” He points to the German Transrapid vehicle in Shanghai that keeps the distance between track and vehicle at 10 mm at a 2 mm accuracy. The tight accuracy is made possible by on-board computers that measure the distance 100,000 times per second.

Okay, but the vacuum tube sounds a bit precarious also. Oster responds: “Slow leaks are detected by sensors and can be mitigated by automatically turning on vacuum pumps that are spaced close enough for redundant overlap should a pump (and its neighboring pump) fail. If the leak is too big to keep the vacuum level in normal limits, capsule traffic is re-routed, and the leaking section isolated until the leak is repaired. In the event of a sudden tube breach (for instance a 747 crashing into the tube), there will be a wall of air moving at about the speed of sound in both directions in the tube, and could result in destruction of a few capsules before the breach can be mitigated. The entire section is then flooded with air at once to slow the capsule at a survivable rate and provide an air cushion to reduce possibility of collisions.” An ETT network could put many of the world’s major centers within a few hours of travel.

Aside from the incredibly fast, incredibly cheap transportation ETT could provide, it was also significantly motivated by its lack of need for fossil fuels. Oster puts his eclectic background as a marine, aeronautical, and mechanical engineer – and a farmer – to work toward his belief that “Transportation should be clean, green, fast, comfortable and affordable for all.”

ET3.com Inc (Evacuated Tube Transport Technologies) is the open consortium company to care for the ETT patent. Oster and ET3 are now looking for investors from all parts of the world to build the ETT network. A big believer in open source systems, ET3 expects the ETT network will be a product of collaborators working to obtain mutual benefits. Investors who spring for the $100 licenses will benefit from revenues generated in ETT operations as well as shares compensating them for technological contributions.

Right now ET3 has sold 184 licenses in at least five different countries.  This is a start, but clearly ET3 has a long way to go. According to Oster, people have already shown “resounding interest” in licensing, “so much we have not yet been able to answer all the requests for help and info.”  Investors are attracted to operating costs expected to be so low that some licensees think advertising could pay for it, as it does for TV and free Internet. Also, because it will be built with mostly inexpensive plastics, initial construction costs are expected to be attractively low.

So when will we be zipping through the airless tube-shaped void? Oster’s doing his best to get the transport gliding. Prototypes already exist and Oster just recently presented his design to California officials in hopes of getting permission to build a 3-mile test track. He didn’t get the go ahead yet, he tells me, but there was interest from “both sides of aisle.” So while US politicians are at a standstill, another country that has shown a keen interest in high-speed technologycould be the first to build an ETT. In 2002 Oster traveled to China where ETT was evaluated by the Chinese Academy of Sciences, the NJT University of Beijing and The Chinese Ministry of Rail. China has since bought more than a dozen ET3 licenses.

The advent of the combustion engine, railroad, subways, and air travel all revolutionized how we travel and, consequently, how close we are to each other both literally and figuratively. ET3 hopes to do the same.  They envision a network that stretches from the US, up across North America, across the Bering Strait, down through China, across India and over to Britain.

At 9:25 the following video is a bit long, but it’s worth seeing in full if you want to get a gist of ET3′s mission, vision, passion. As I alluded to before, the technological hurdles are enormous. But dreams don’t come true without someone dreaming them first. Wasn’t it Wilbur Wright whotold his brother that man would not fly for fifty years, just two years before they did exactly that?