* Denmark still needs to wean itself off coal 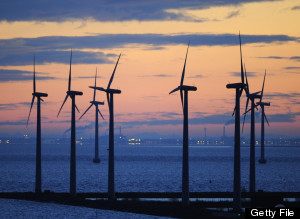 SAMSO, Denmark, May 17 (Reuters) – Over a beer or two, Danes like to tell a story that goes like this: One night the energy ministers of the countries around the North Sea got together to divide up its oil and gas wealth. The Danish minister got very drunk, but the Norwegian managed to stay sober. As a result, Norway carved out a jagged shape that included Ekofisk, which has proved to be a major field, and Denmark was left with the dregs.

Regarded as a model of how to spend oil and gas wealth wisely, Norway has stashed away surplus revenues from exports while hydropower caters for the bulk of its domestic electricity needs.

But Denmark has also found its own path to energy pragmatism, supplementing its relatively few oil rigs with wind turbines and a deep commitment to energy saving.

As awareness has grown, cities like Copenhagen and some of the nation’s hundreds of islands are vying for the accolade of “zero carbon” while Danes from across the social spectrum can tell you how much energy they use to the kilowatt.

Keeping up with the Joneses – or in this case Christensens – is all about using less fuel and having better solar panels.

“We get a bit competitive with our neighbours,” said Kalle Christensen, a computer engineer, who lives in a low-energy house in Stenlose South, just outside Copenhagen.

His is one of some 400 low-energy houses in a community expected to grow to at least 750. He said he was looking into buying solar panels that would allow him to sell more power back to the grid, although he already expects energy savings will more than make up the roughly 10,000 euro ($13,300) difference in price between his low-energy home and a standard house.

Stenlose South has the highest concentration of such homes, but low-energy houses are a growing trend across Denmark, which enforces strict efficiency standards on new building.

Together with his wife Anne Godiksen, a chemist, and two young children, Christensen uses around 5,000 kilowatt hours of electricity per year compared with the 25,000 needed in their previous house.

Insulated walls, reinforced glass windows and technology tucked away in a control room ensure a constant temperature and re-use of heat from appliances. When it was minus 15 degrees Celsius outside last winter, it was a toasty 22 degrees inside.

Their neighbours are retired police inspector Ove Bendtsen and his wife Hanne Beer.

The couple had considered moving to a retirement village but Beer, a former municipal worker, had heard about the low-energy housing project through her job.

Surrounded by young kilowatt-counters, they now have no anxiety about utilities bills and no need to buy water softener for the washing machine that runs on collected rain water. “There are only advantages,” Beer said.

For Denmark as a whole, the real energy sobering-up began in the 1970s when prices surged in the first oil crisis and the nation found itself almost 100 percent dependent on fossil fuel.

Now a world leader in wind power, Denmark gets a quarter of its electricity from wind and aims to increase that share to 50 percent by 2020.

As holder of the EU presidency until the end of June, the Danes are championing energy saving and green growth in the region, but convincing others can be a problem.

In principle, all 27 EU nations have backed a target to cut energy use by 20 percent by 2020, but in practice they balk at any upfront investment, even for building measures that create jobs and ultimately cut bills.

Harassed finance ministers tend to be the toughest opponents. In Denmark, however, a cross-party, low-carbon consensus extends to every government department. The finance minister backs green growth as heartily as the environment minister.

“If we don’t invest, it will be more expensive,” Danish Economic and Interior Minister Margrethe Vestager told Reuters when asked about energy savings measures and renewables. “For us, the alternative to renewables is still higher oil prices.”

High taxes for fossil fuel – such as 75 percent tax on heating oil – have helped to convince the Danish general public, while for business a stable regime of subsidies, feed-in tariffs and tax-deductible green investment has spurred renewables.

State-owned oil, gas and power company DONG still derives the bulk of its earnings from fossil fuel, driven by high oil prices, and green groups criticise Denmark for continued use of carbon-intensive coal.

In contrast to oil majors that have dipped into renewables but so far stuck with the fossil fuel business model they trust, however, DONG issues separate figures for green power and they show rising earnings from wind.

The Danish government has fostered a domestic green rivalry.

A national competition in 1997 selected Samso – between the island of Zealand and the Jutland peninsula – to become Denmark’s first carbon-neutral island.

By 2005, Samso had achieved the goal, and the 114-sq-km island, with a dwindling population of around 4,000, is now a net exporter of green power, which means the fossil fuel it uses on ferry journeys and other transport is offset.

At Tyregaarden Farm, Jorgen Tranberg, who has 100 hectares and 130 dairy cows, proudly leads visitors into the base of his wind turbine where dials indicate how much power is being generated. What interests him are the hard economics.

“I sell more electricity than milk,” he said. “There’s no bad weather, if the wind’s blowing.”

Tranberg bought his wind turbine 12 years ago. It produces 2.5 million kilowatt hours of electricity a year – enough, he says, for 35 farms like his.

Tranberg also bought half of an offshore wind turbine in 2003 for 12 million crowns. Gigantic offshore turbines are much more expensive to buy and maintain than onshore – Tranberg faced a 4 million crowns repair bill when a gear box failed – but they also generate much more power.

In all, he sells 6.5 million kilowatts every year along with 1.4 million litres of milk.

Tranberg and others on Samso, who invested at the right time with the help of subsidies and tax incentives, are the lucky ones.

Agriculture Minister Mette Gjerskov is frank about the debts crippling many Danish farmers, debts that can be due partly to spending on renewable energy.

Even for those who have got it right, building on the progress will be hard: the global economic downturn and credit crisis mean finding the funds for shrewd, long-term investment is harder than ever, and the obvious changes have been made.

“It’s getting more and more difficult. It was difficult in the beginning because people rejected it. In the end they realised that this was not dangerous,” said Soren Hermansen, chief executive officer of the Samso Energy Academy, summing up the Samso experience.

“We had really good development of the project, but now we have done the easy things.”

The next step is to aim to be not just carbon-neutral, but carbon-free, which means tackling the issue of how to escape dependence on transport fuel.

The Energy Academy, which has become a magnet for “energy tourists” from all over the world, is working on solutions to these problems.

Hermansen has not lost his optimism that “radical changes ” r emain possible, including Copenhagen’s dream of becoming the world’s first carbon neutral capital by 2025. For Denmark’s centre-left government, becoming ever greener is non-negotiable.

“In spite of our economic crisis, the green economy is not just one way forward, it is the only way forward,” Ida Auken, Denmark’s environment minister, told journalists in April.