What Did You Learn From Steve Jobs?

by Rod Kurtz:  When a larger-than-life figure passes away, it’s a little hard to process. Even in the pseudo-celebrity culture we’ve created for ourselves, there are still a few iconic figures whose passing command the banner headlines and make us stop when we hear the news and share a collective gasp. 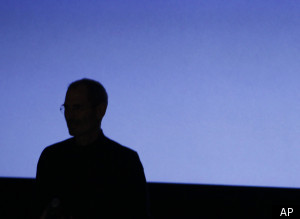 When’s the last time that figure was a tech geek in a black turtleneck?

You can’t help but think that Steve Jobs would’ve smiled at the fact that millions around the world first learned of his death, at age 56, on devices he designed — and then relayed the news and shared their thoughts on those very same devices.

Most of us didn’t know him, but couldn’t help but feel like we did. Sure, there were the understated-yet-grandiose presentations and the legendary Apple mystique he mischievously sparked, of which the media willingly fanned the flames. But it all worked because he helped make technology sleek, sexy and simple — and in the process, intimate. We carried pieces of his vision around with us every day, some of us literally in our pockets. Ashton Kutcher, of all people, may have said it best when he tweeted just after Jobs’ passing, “I never thought I could be so busted up about the loss of someone I never met.”

In other words, Steve Jobs was an entrepreneur. And while we mourn his loss, the best way to remember him is to remember that entrepreneurs can change the world. So to help put his impact in perspective, we asked some of his fellow entrepreneurs — our Board of Directors — to share what they learned from this true icon.

“Steve was a truly great businessman, but more than that, he was an inspiration to young people, entrepreneurs, inventors, designers, early adopters, budding musicians and people with disabilities who discovered with Apple’s devices a way to engage with the world.

“So many people drew courage from Steve and related to his life story: Adoptees, college dropouts, struggling entrepreneurs, ousted business leaders figuring out how to make a difference in the world and people fighting debilitating illness. We have all been there in some way and can see a bit of ourselves in his personal and professional successes and struggles.

“He inspired with his direct message, ‘Your time is limited, so don’t waste it living someone else’s life… Have the courage to follow your heart and intuition.’ And yet, despite all his success, he never forgot what was really important in life and was a much-loved family man. My thoughts are with Laurene and his family. He will be sorely missed.”

“As iType on my Mac and commiserate over the great loss of Steve Jobs with Jodie on my iPhone, it’s apparent that choosing a single answer for the biggest thing we learned from Steve is not an easy task. But if there has to be one quote to summarize what we’ve learned from Steve, it’d be, ‘Stay hungry. Stay foolish.’ He showed the world the importance of design, quality and brand identity. We will forever be inspired by his passion, innovation and leadership. iLove him and the language he created. May he rest in peace and continue to inspire.”

Director, Texas Venture Labs at the University of Texas
“The Validator”

“My biggest lesson from Steve Jobs was to never, ever, ever give up. He was absolutely maniacal on this front, and I learned this firsthand in the 1980s when I was at Lotus and we were launching Jazz on the Macintosh. His never giving up was evidenced in how he died — I knew, and at the same time feared, the only reason for his resignation would be him being close to death.

Rest in peace, Steve Jobs. You accomplished your dream — you changed the world.”

Founder and CEO, Nfinity
“The Matador”

“He taught me that few things matters as much to the long-term success of a business as innovation.”

“My favorite lesson of his was the comeback. Apple became a business school case study in the ’90s on how a bad CEO ruined an iconic brand and was kicked to the curb. Then he came back and regained his former glory — and a whole lot more. Thanks for all you did, Steve.”

Anne: “Hire people smarter than you are, take risks, follow your vision.”

Elizabeth: “I came of age in my business life in an era dominated by the imagination and leadership of Apple. Steve Jobs’ leadership made it clear that brands can thrive by focusing on quality, design, customer experience, innovation and authenticity. Being big isn’t the most important (though now, of course, they have that too), but being the best is. As I entered the world of work, my Mac was a badge of creativity — a type of permission to think different, play by different rules and set new expectations in the world of work.

“Now that I am growing my own company, I constantly think of those touchstones — be creative, be authentic, never forget to serve your customer with an experience that is truly unique and personal AND that works. I owe Steve Jobs a great debt: First, because I am literally touching one of his creations at most times during my day, but more importantly, because the foundation of what I know to be true about business, I learned from his example.”

“Steve Jobs the entrepreneur seemed distant, impenetrable and God-like until last night. I posted a comment on our Facebook page about my sadness upon his death, asking if anyone had read The Whole Earth Catalogue that influenced Jobs. That lead to a conversation with our Brooklyn Industries customers about Jobs, which lead to his TED Talks and his philosophy of living every day by what your passion is. I then listened to Jobs talking about his love of calligraphy, his dropping out of Reed College and his passion for the beauty of computers. This small quick interaction on Facebook revealed more succinctly what Jobs had done. He believed in the power of community and technology to build a better world. This utopianism is what we all can live by, how our companies and products can lead to better lives. I invite you to check out our Facebook interaction here.”

Founder and CEO, The Go Daddy Group
“The Renegade”

“The biggest thing I learned from Steve Jobs was how absolutely important it is to disregard the naysayers and believe in yourself. No doubt, co-founding Apple Computer was a tremendous accomplishment, but Steve Jobs’ biggest successes came when he returned the second time as Apple’s CEO (after he was fired from the CEO job and replaced by his hand-picked successor). When he returned as CEO, the company literally was on the brink of failure. Steve Jobs not only turned Apple completely around, he built it into one of the biggest and most influential companies in the world. He revolutionized the way we think about and use technology, and most definitely, he showed us how absolutely cool and life-changing technology can be. To do all that, you absolutely have to believe in yourself.”

“The biggest thing I learned was that perseverance and adaptability (with a bit of foolishness) are vital partners with vision (and, of course, in Steve Jobs’ case, genius). Steve Jobs was a visionary genius, but what made him so compelling is that he did not give up after creating great products that only reached the few, but rather returned, learned and adapted his vast creative talents to create whole new product categories (iMac, iPod, iPhone, iPad, Pixar, Apple’s retail store experience) which have now changed the lives of millions. He ignited and inspired passion. We will all miss him.”

“You can’t help but be inspired by the courage of Steve Jobs. He leaves such a long legacy, that it’s hard to pick the ‘biggest thing.’ But there’s a message of hope for all entrepreneurs (and ‘civilians’ too) at how he reinvented himself after getting fired by the Apple board, and then reinvented Apple when he came back to rescue a dying company. It proves the cliché: If at first you don’t succeed…”

Investor and Author of Rule #1 And Payback Time
“Rebelman”

“I worked closely with Steve Jobs for a few months when he was trying to build the NeXT computer company. I’d invested heavily in a software firm that was building document-management software for the NeXT. They’d sold about $25 million worth of NeXT computers that depended on the software my company was developing. I did a demo for Steve, one-on-one — and it didn’t go well. He was furious that he had that much money riding on our stuff and that the development wasn’t farther along. He suddenly got up, bolted out of the office and yelled at Todd Rulon Miller, head of sales, that he never wanted to see my face again. That night, Todd called and asked me to meet with Steve the next day. I asked if he was going to apologize. Todd said, no, he wanted to pump another couple of bullets in. I went anyway and Steve asked me to walk with him around the beautiful NeXT campus, and as we walked, he explained that he hated bad interfaces and that we had to change it. I said that yesterday he’d thrown me out because he didn’t think we’d make the deadline and now he wanted to stop development and change the interface? Steve was smiling at the absurdity and said yes, he wanted to change the interface.

“So we flew out the top designer. She met with Steve and me for a few hours and they whipped out a new design, then the team went nuts and got the whole thing done in four weeks. The last time I met with Steve personally, he was beaming at the developers and the team and the software, as happy as he could be about the whole process. The software design was a huge improvement and the product was a hit.

“So what did I learn? That an entrepreneur is going to first feel the pressure to meet deadlines from sales and cash flow and reality. But no matter what, he should never let a product go out the door that doesn’t meet his standards, regardless of the downside. That was Steve. Combine that willfullness and confidence with a true visonary for tech products and you have a man who made a revolution and changed the world. He can never be replaced and we will sorely miss him.”

Columnist and Author of The Small Business Bible
“Mr. AllBiz”

“Steve Jobs taught me to really — I mean really — trust my gut. I think most entrepreneurs do, but then too, we like validation, from focus groups, opinions of others, etc. But like his hero Edwin Land (Polaroid), Jobs focus-tested nothing. He knew that he knew the right way to go. G-d bless him for that, and everything else he gave all of us.”

Founder, The Relentless Foundation and Entrepreneur Week
“The Sheriff”

“Steve taught me that when surrounded by the proper infrastructure and support system, one can truly change the world.”