Why It’s Healthy To Be Social

One advantage of belonging to a cohesive society in which people help each other is that the group is often better equipped than a set of individuals to deal with threats from the outside. 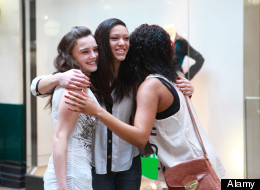 People intuitively realize there is strength in numbers, and take comfort in the company of others, especially in times of anxiety or need. Or, as Patrick Henry famously said, “United we stand, divided we fall.” (Ironically, Henry collapsed and fell into the arms of bystanders shortly after uttering the phrase.)

It’s all good and well that we can unite against an external foe, but what is perhaps more interesting is a result put forth by a slew of recent studies: people who are a part of a group are also far better equipped to conquer an internal foe—the threat of bad health.

To appreciate the impact of social connection on the state of your body, one need only consider what happens when it is abruptly cut off. Many languages have expressions such as “hurt feelings” that compare the pain of such social rejection to the pain of physical injury. We now know that those are more than just metaphors: there are two components to physical pain, an unpleasant emotional feeling, and a feeling of sensory distress, associated with different structures in the brain.

Social pain is also associated with a particular brain structure, the anterior cingulate cortex—the same structure involved in the emotional component of physical pain. This connection between physical and social pain reflects the tie between social connection and the physiological processes of the body. (For more on this connection, see “The Pain of Exclusion,” by Kipling D. Williams, Scientific American Mind, January/February 2011.)

In one of the recent studies on the health benefits of social relationships, published earlier this year, researchers provided evidence that social ties and increased contact with family and friends are associated with a lower risk of death in young women with breast cancer. Another presented a similar conclusion with respect to surviving heart surgery. What’s more, a 2010 meta-analysis of 148 other studies showed that social connection doesn’t just help us survive health problems: the lack of it causes them.

In a study whose results are typical of the 148 reviewed, researchers surveyed 4775 adults in Alameda County, near San Francisco. The subjects completed a survey asking about social ties such as marriage, contacts with extended family and friends, and group affiliation. Each individual’s answers were translated into a number on a “social network index,” with a high number meaning the person had many regular and close social contacts, and a low number representing relative social isolation. The researchers then tracked the health of their subjects over the next nine years.

Since the participants had varying backgrounds, the scientists employed mathematical techniques to isolate the effects of social connectivity from risk factors such as smoking and also from socioeconomic status and reported levels of life satisfaction. They found a striking result. Over the nine-year period, those who placed low on the social network index were twice as likely to die as individuals who had placed high on the index but had otherwise similar risk factors.

In the course of researching this issue for my new book, Subliminal: How Your Unconscious Mind Rules Your Behavior (Pantheon), just released today, I took a look at a web directory of support groups in Los Angeles. I found groups focused on abusive behavior, acne, adderall addiction, addiction, ADHD, adoption, agoraphobia, alcoholism, albinism, Alzheimer’s disease, ambien use, anemia, anger management, anorexia, anxiety, arthritis, Asperger’s syndrome, asthma, ativan addiction and autism—and that’s just the A’s. This abundance of support groups is a reflection of the human desire to associate with others, especially in time of need. The research shows that it’s a beneficial instinct.

Of course, we’re not all alike. We all know people who need people—and those who appear to need them much less. Does social contact matter more to some people than to others? Genetics suggests it does. Recent research hints that the biochemical carrier of the benefits of social support is the neuropeptide oxytocin. It is well known that oxytocin plays an essential role in the regulation of social behavior and attachment, and has throughout mammalian evolution. When administered to volunteers, for example, oxytocin reduces stress responses and increases prosocial behavior.

Your genes enter the picture because studies suggest that the gene for the oxytocin receptors in the brain comes in a “more social” and “less social” form. People having the latter form of the gene tend to be less empathetic and demonstrate more negative affect. A paper published last December indicates that the more social form of this gene, called OXTR, is required for a person to benefit from social support. For individuals with this version of the gene, social connection lowered stress levels, but enlisting a friend’s counsel did not calm those who lacked this form of the gene.

Until genetic testing becomes commonplace, most of us will just have to go with our instincts regarding the importance of having a social network. And until then, hermits will remain bad bets for life insurance underwriters.