by David J. Hill:  A 10-year-old Swedish girl has had a potentially life-threatening condition alleviated by receiving a vein grown from her own stem cells. 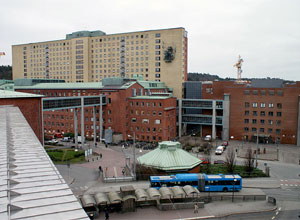 Her condition, called extrahepatic portal vein obstruction, blocks the bloodflow between the intestines and the liver. Doctors at the Sahlgrenska University Hospital and the University of Gothenburg, Sweden, removed cells from a deceased donor’s vein with detergents and enzymes, leaving a scaffold upon which the girl’s own stem cells could attach and differentiate into the endothelial and smooth muscles cells that make up a healthy vein. This vein was then transplanted into the patient, and normal blood flow was reestablished.

Though this kind of bypass procedure has become more common for children, this is the first time a vein grown from a patient’s stem cells has been used in this way. In a typical procedure, doctors graft in a donor vein to bypass the constricted part of the hepatic vein (shaded), allowing blood to flow normally between the intestines and the liver (arrows). (from JUM)

The hepatic portal vein transports blood containing vital nutrients from the intestines, where food is broken down, to the liver for further digestion. Blockage or reduced blood flow through this major vein can lead to malnutrition, bleeding, and death. A corrective procedure alleviates these problems by inserting a graft bypass to reroute blood around the problematic part of the hepatic vein. In some cases with children, the leftover umbilical vein can be grafted in, but when it’s unusable (as it was with this particular patient), a suitable vein must either be harvested from another part of the body, which can lead to secondary problems, or taken from a donor. Receiving a donor vein would require the patient to take immunosuppressing drugs for an extended period to prevent rejection.

By using her own stem cells, however, the doctors demonstrated a “proof-of-concept” that can be considered for other patients that require a vascular vein shunt. The experimental procedure was published in The Lancet (unfortunately, the article is behind a paywall, but you can read the abstract here).

The current case is just the latest in a field that is steadily gaining momentum. Regenerative medicine has notched its share of recent victories, such as the 10-year-old boy in 2010 who received a trachea transplant grown from his own stem cells. Increasingly, a patient’s own stem cells are being used to transform transplant procedures by eliminating the need for artificial or donated organs, on one hand, and the secondary immunlogical effects of transplanting donated organs, on the other. Doctors have used stem cells to grow a teen’s cheek bonesand a jaw bone in addition to race horse tendons. Stem cells have also been used to repair nephritis in kidneys, reverse corneal blindness, treat bone injuries and joint damage,reduce the effect of adult sickle cell disease, and cure HIV. Researchers are continually looking for other ways to use stem cells, such as growing new teeth from polymer scaffoldsand, at least in mice, growing pituitary glands, increasing muscle size, and repairing damaged hearts.

Many of these cases are isolated and require clinical trials to prove their acceptability for widespread use. While FDA approval for US stem cell therapies drags, causing at least one doctor to provide stem cell therapy without FDA’s permission, the wheels are definitely in motion as the first stem cell-based therapy has been approved in Canada recently.