Mindfulness (Pali: sati, Sanskrit: smṛti; also translated as awareness) is a spiritual or psychological faculty (indriya) that is considered to be of great importance in the path to enlightenment according to the teaching of the Buddha. 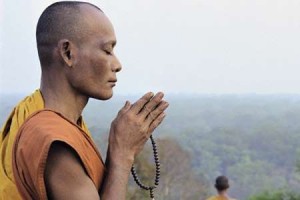 It is one of the seven factors of enlightenment. “Correct” or “right” mindfulness (Pali: sammā-sati, Sanskrit samyak-smṛti) is the seventh element of the noble eightfold path. Mindfulness meditation can also be traced back to the earlier Upanishads, part of Hindu scripture.

Enlightenment (bodhi) is a state of being in which greed, hatred and delusion (Pali: moha) have been overcome, abandoned and are absent from the mind. Mindfulness, which, among other things, is an attentive awareness of the reality of things (especially of the present moment) is an antidote to delusion and is considered as such a ‘power’ (Pali: bala). This faculty becomes a power in particular when it is coupled with clear comprehension of whatever is taking place.

The Buddha advocated that one should establish mindfulness (satipatthana) in one’s day-to-day life maintaining as much as possible a calm awareness of one’s bodily functions, sensations (feelings), objects of consciousness (thoughts and perceptions), and consciousness itself. The practice of mindfulness supports analysis resulting in the arising of wisdom (Pali: paññā, Sanskrit: prajñā).  A key innovative teaching of the Buddha was that meditative stabilisation must be combined with liberating discernment.

The Satipatthana Sutta (Sanskrit: Smṛtyupasthāna Sūtra) is an early text dealing with mindfulness.

Mindfulness practice, inherited from the Buddhist tradition, is increasingly being employed in Western psychology to alleviate a variety of mental and physical conditions, including obsessive-compulsive disorder, anxiety, and in the prevention of relapse in depression and drug addiction.  See also Mindfulness (psychology).

When practicing mindfulness, for instance by watching the breath, one must remember to maintain attention on the chosen object of awareness, “faithfully returning back to refocus on that object whenever the mind wanders away from it.” Thus, mindfulness means not only, “moment to moment awareness of present events,” but also, “remembering to be aware of something or to do something at a designated time in the future”.  In fact, “the primary connotation of this Sanskrit term [smrti] (and its corresponding Pali term sati) is recollection”.