by David J. Hill:  In the second Star Wars prequel, Attack Of The Clones, C3PO walks into a droid factory and exclaims, “Machines building machines? How perverse!” 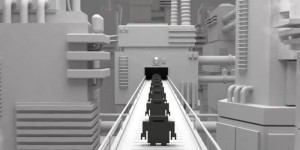 Although it may be abomination to a fictional robot, for the Japanese camera maker Canon, a fully automated factory is good business sense. Recently, the company announced that over the next few years, some of its camera factories will phase out human workers in an effort to reduce costs. That means robots will soon be making the next generation of cameras, possibly as soon as 2015.

In an effort to convince the public that this move doesn’t mean layoffs at Canon, the company’s spokesman Jun Misumi said, “When machines become more sophisticated, human beings can be transferred to do new kinds of work,” according to the Associated Press.

Even for Japan, globalization has led to exporting manufacturing jobs to countries where labor costs are lower, like China and India. So this announcement is a validation that robots are cheaper than humans for a manufacturing company, as long as the robotics technology is sophisticated enough to mimic human actions. Data from 2008 showed Japan was clearly in the lead in terms of industrial robot use.

Fortunately, Japan has become one of the leaders in robotics development, so Canon is confident that it can achieve full automation of at least some factories, perhaps by taking some of the more exotic robots that have been developed and learning to make them more practical, as was done a few years ago with a strawberry-picking robot.

When companies like Canon and others around the worldventure into more automated workforces, concerns arise quickly about human job loss. But Misumi has a point about how human beings should be doing new kinds of work. Take, for instance, this video of young non-robotic workers packing playing cards into unfolded boxes and ask yourself, “Is this the only contribution to society these individuals have to offer?”:

Amidst the growing pains of societies across the globe adjusting to robots replacing humans in factories, the reality is that manual labor jobs will be, and arguably, should be done by robots, allowing people to explore the new kinds of work that Misumi alludes to. What is this work? It’s not entirely clear yet, but it certainly has the potential to draw on a much fuller set of an individual’s talents than before.

News and Insights from Singularity University