Scientists have found that a kind of Chinese mindfulness meditation practice is linked with actual physical changes in the brain — changes that may even have protective effects against mental illness. 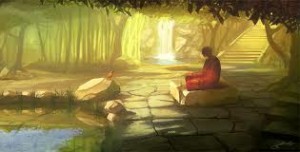 Researchers from the University of Oregon studied past data from a 2010 study of 45 undergraduate students, as well as a past study on 68 students at the Dalian University of Technology in China, who practiced integrative body-mind training. The meditation technique places heavy emphasis on being aware of the mind, body and environment.

Using diffusion tensor imaging, a kind of MRI imaging technique, the researchers were able to look at the brain structure changes that occurred in connection with themindfulness meditation practice.

The researchers found that after two weeks of practicing this kind of meditation, the study participants had an increase in the number of signaling connections in the brain, called axonal density.

“This dynamic pattern of white matter change involving the anterior cingulate cortex, a part of the brain network related to self-regulation, could provide a means for intervention to improve or prevent mental disorders,” the researchers wrote in theProceedings of the National Academy of Sciences study.

Last year, researchers from the Massachusetts General Hospital published a study in the journal Psychiatry Research: Neuroimaging showing that engaging in a mindfulness meditation program for eight weeks is linked with changes in the memory, empathy, stress and sense of self regions of the brain.

“This study demonstrates that changes in brain structure may underlie some of these reported improvements and that people are not just feeling better because they are spending time relaxing,” study researcher Sara Lazar, Ph.D., of the MGH Psychiatric Neuroimaging Research Program, said in a statement.

It Makes Your Brain Plastic

Quite literally, sustained meditation leads to something called neuroplasticity, which is defined as the brain’s ability to change, structurally and functionally, on the basis of environmental input. For much of the last century, scientists believed that the brain essentially stopped changing after adulthood. But research by University of Wisconsin neuroscientist Richard Davidson has shown that experienced meditators exhibit high levels of gamma wave activity and display an ability — continuing after the meditation session has attended — to not get stuck on a particular stimulus. That is, they’re automatically able to control their thoughts and reactiveness.

A 2005 study on American men and women who meditated a mere 40 minutes a day showed that they had thicker cortical walls than non-meditators. What this meant is that their brains were aging at a slower rate. Cortical thickness is also associated with decision making, attention and memory.

It Can Be Better Than Sleeping

In a 2006 study, college students were asked to either sleep, meditate or watch TV. They were then tested on their alertness by being asked to hit a button every time a light flashed on a screen. The meditators did better than the nappers and TV watchers — by a whole 10 percent.

In 2008, Dr. Randy Zusman, a doctor at the Massachusetts General Hospital, asked patients suffering from high blood pressure to try a meditation-based relaxation program for three months. These were patients whose blood pressure had not been controlled with medication. After meditating regularly for three months,  40 of the 60 patients showed significant drops in blood pressure levels and were able to reduce some of their medication. The reason? Relaxation results in the formation of nitric oxide which opens up your blood vessels.

It Can Protect Your Telomeres

Telomeres — the protective caps at the end of our chromosomes — are the new frontier of anti-aging science. Longer telomeres mean that you’re also likely to live longer. Research done by the University of California, Davis’ Shamatha Projecthas shown that meditators have significantly higher telomerase activity that non-meditators. Telomerase is the enzyme that helps build telomeres, and greater telomerase activity can possibly translate into stronger and longer telomeres .

It Can Slow The Progression Of HIV

A 2008 study on HIV positive patients found that, after an eight-week meditation course, patientswho’d meditated showed no decline in lymphocyte content compared with non-meditators who showed significant reduction in lymphocytes. Lymphocytes or white blood cells are the “brain” of the body’s immune system, and are particularly important for HIV positive people. The study also found that lymphocyte levels actually went up with each meditation session. However, due to the small sample size — only 48 volunteers — it’s harder to draw definitive conclusions.

Earlier this year, a study conducted by Wake Forest Baptist University found that meditation could reduce pain intensity by 40 percent and pain unpleasantness by 57 percent. Morphine and other pain-relieving drugs typically show a pain reduction of 25 percent. Meditation works by reducing activity in the somatosensory cortex and increasing activity in other areas of the brain.  This study also had a small sample size, making it harder to draw definite conclusions.