by Peter Murray:  What if treating skin cancer was just a matter of wearing a patch for a few hours? At this year’s Society of Nuclear Medicine’s Annual Meeting one group of researchers presented such a patch. 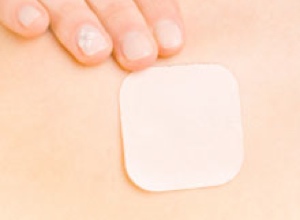 The patch is infused with phosphorus-32, a radioactive isotope used to treat some types of cancer. In a study of 10 patients with basal cell carcinoma located on their faces, the patch was applied for three hours, then for another three hours four and seven days later. When biopsies were taken three months after treatment all ten patients, ranging from 32 to 74 years old, showed no traces of their tumors. When biopsies were performed again at six months, however, the basal cell carcinomas had returned in two of the patients.

The trial is admittedly very small, and larger studies still need to be performed before the patch can even be considered an effective and safe treatment. But if it is, the patch could provide a relatively painless alternative to surgery or radiotherapy commonly used to treat basal cell carcinomas, and avoid the scars or discomfort associated with those treatments.

There are two types of skin cancers: melanoma and nonmelanoma. Melanomas occur when melanocytes, the cells that produce the skin pigment melanin, become cancerous. While only making up about 5 percent of all skin cancer cases, they cause the majority of skin cancer deaths. Of the 76,250 new melanoma cases in 2012 so far, 9,180, or about 12 percent, have died.

Nonmelanoma cancers are more common than melanomas, and in fact are the most common type of cancer in the United States. And the most common type of nonmelanoma is basal cell carcinoma, which accounts for about three-quarters of all nonmelamonas. According to theNational Cancer Institute, an estimated 2,152,500 people were treated for nonmelanoma skin cancers in 2006. By comparison, the number of cases for all other types of cancer was an estimated 1.4 million. That means for every five people being treated for skin cancer, three of them are for nonmelanoma.

But while nonmelanoma cancers are typically not lethal – they account for less than 0.1 percent of cancer related deaths – the superficial tumors often cause disfiguration, which can be especially traumatic if located on the face.

“The study is important for the field of nuclear medicine as it opens a new dimension in the field of therapeutic nuclear medicine and dermatology, especially for the treatment of skin malignancies,” Priyanka Gupta, a student at the All India Institute of Medical Sciences, New Delhi and lead author of the study said in a press release. “For patients, it is beneficial because it is a simple, inexpensive and convenient procedure that does not require them to be admitted to the hospital. This may become the standard procedure for treating basal cell carcinoma or serve as an alternative when surgery and radiotherapy are not possible.”

Advances in medicine aren’t always measured in terms of life-saving potential, but added convenience and accessibility as well. While the phosphorous-32 skin patch probably won’t do much to decrease skin cancer-related mortalities, it could do much to dethrone nonmelanomas as the most numerous type of cancer.