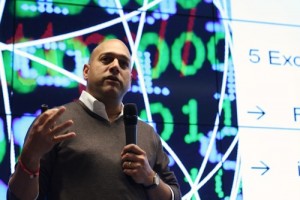 In the embedded video below, Ismail talks about how to keep pace with exponential change.

Templeton addresses one specific technology – self-driving cars – in his portion of the talk.  Working with Google, Templeton is involved in bringing robot cars to the market.

We live in an era of extraordinary progress: the human life doubled in 100 years and the price of phone call is virtually free. There’s an exponential growth of information and computational power as per the Moore’s Law, 3D printers can print 70% of their own parts, (soon they’ll be able to replicate themselves?). Ismail uses the analogy of thermodynamics in his talk.

According to Ismail technology is heating up our world and vaporizing it. As we moved from a solid to a liquid to a now vaporous world. He backs the ice-water-vapor metaphor with real life evolutions such as “hardware-internet computing-cloud computing” for society.

As Ismail suggests, vapor is hard to recapture and it’s hot. Hot movement like the Arab Spring and the Occupy movements failed to create stable structures showing that society is sometimes not ready for the speed of change.

Robocars may be a solution to many of the world’s problems, including social, environnmental, economic according to Templeton.

In the USA alone, the introduction of driverless cars could:

– save 35,000 lives and a million injuries (NIH). Mostly young people, for whom car accidents are the leading cause of death among major categories.

– save 50 billion gallons of imported gasoline, replaced with the equivalent of 10 billion “gallons” of domestic-source power plant fuel. Thus eliminating about 12-15% of the USA’s CO2 emissions and nastier pollution.

– trigger a serious reduction in the urban land devoted to the ~600 million parking spaces, estimated to be up to 10% of urban land in many cities

The best aspect, though, will be the introduction of  Moore’s Law into the automobile industry (which is a big reason Google is involved).  The industry built on incremental change and which still basically produces vehicles using 19th century thinking, is now entering exponential territory.