(Medical Xpress) — Yale researcher Jose Cordova and Erich Astudillo from the University of Chile (and Founder of Top Tech Innovations SpA) have after working together, discovered a new molecule that kills the bacteria Streptococcus Mutans; 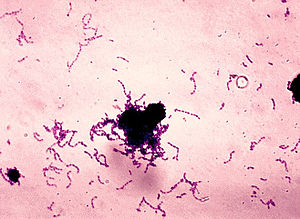 long known to be responsible for breaking down sugars in food in the mouth and leaving behind lactic acid which corrodes tooth enamel leading to decay. The new molecule they call Keep 32 (after the 32 teeth in the average human mouth) has been found to kill the bacteria on contact.

The two have applied for a patent on their discovery and have also begun a marketing strategy aimed at both oral care products and makers of food. They say either product if left in the mouth for just 60 seconds will eliminate all the harmful bacteria in the mouth and keep them at bay for several hours. If the new molecule passes health and safety tests, the two believe products using their new molecule should be on the market in as little a year and a half. They expect the market for such a product to reach $300 million in just the first year.

The duo have been working together since 2005 using money from the Founder Institute and say the ultimate objective it so license the process for creating the molecule they’ve discovered to big companies like Procter & Gamble, Colgate or even candy companies such as Hershey’s. In interviews with the press in Chile, Astudillo has indicated that the two researchers are already heavily into negotiations with several companies, some of which are interested in buying the patent outright once it is approved.

Over the years many products have come on the scene with claims of relieving humanity of the plague of tooth decay, cavities and sometimes the loss of teeth, but other than the introduction of fluoride into drinking water, not much progress has been. If the claims made by this new team proves true however, it could herald a watershed mark in ridding the world of tooth decay as well as helping to improve the health overall for millions as tooth decay and the inflammation that occurs as a result have in recent times been linked to many other health problems throughout the body including heart attacks and even dementia.

73% of the world population has caries, which is why the researcher of the U. Yale, Jose Cordova, along with Erich Astudillo, accountant auditor of the U. Santiago, decided in 2005 to find something that would help reduce that figure. Thus they discovered that the molecule Keep 32 eliminates the bacteria Streptococcus mutans that causes cavities in teeth in just 60 seconds.

Given its potential, and have a provisional patent on the molecule in the U.S. and are seeking funding to complete human trials for a period of 14 to 18 months, have a product on the market.

“The molecule not only be incorporated into a gum, but products like toothpastes, mouthwashes, toothpastes sheets, candies, koyaks, dental night gel and others who may be inside the mouth 60 seconds at least,” said Erich Astudillo , CEO of Top Tech Innovations, a company that hosts this development.

“In Chile we were seeking funding for two years and no one is interested in putting resources to R & D,” he says. So he joined the Founder Institute (one of the largest incubators and business accelerators in the world) to better model the business and looking for capital in international networking.

“We are currently in talks with five interested in investing in our project or buy our patent, which will involve moving abroad to complete product development,” he explains. They have an ambitious business plan targeting revenue of $ 300 million in the first five years of operation.

“We would sell the license to large corporations as personal hygiene, such as Colgate and P & G, and snacks such as Hershey’s, Cadbury Trevor, among others,” he says.