by Ker Than for National Geographic News:  Archaeological “gold mine” illuminates connection between king and sun god.  Some 1,600 years ago, the Temple of the Night Sun was a blood-red beacon visible for miles and adorned with giant masks of the Maya sun god as a shark, blood drinker, and jaguar. 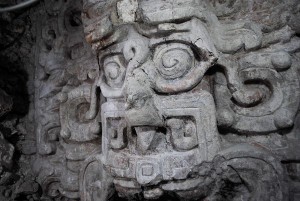 Long since lost to the Guatemalan jungle, the temple is finally showing its faces to archaeologists, and revealing new clues about the rivalrous kingdoms of the Maya.

Unlike the relatively centralized Aztec and Inca empires, the Maya civilization—which spanned much of what are now Guatemala, Belize, and Mexico‘s Yucatán region (Maya map)—was a loose aggregation of city-states. (Read about the rise and fall of the Maya in National Geographic magazine.)

“This has been a growing awareness to us since the 1990s, when it became clear that a few kingdoms were more important than others,” said Brown University archaeologist Stephen Houston, who announced the discovery of the new temple Thursday.

El Zotz, in what’s now Guatemala, was one of the smaller kingdoms, but one apparently bent on making a big impression.

By 2010 archaeologists working on a hilltop near the ancient city center had discovered 45-foot-tall (13-meter-tall) Diablo Pyramid. Atop it they found a royal palace and a tomb, believed to hold the city’s first ruler, who lived around A.D. 350 to 400.

Around the same time, Houston and a colleague spotted the first hints of the Temple of the Night Sun, behind the royal tomb on Diablo Pyramid. Only recently, though, have excavations uncovered the unprecedented artworks under centuries of overgrowth

The sides of the temple are decorated with 5-foot-tall (1.5-meter-tall) stucco masks showing the face of the sun god changing as he traverses the sky over the course of a day.

One mask is sharklike, likely a reference to the sun rising from the Caribbean in the east, Houston said.

The noonday sun is depicted as an ancient being with crossed eyes who drank blood, and a final series of masks resemble the local jaguars, which awake from their jungle slumbers at dusk.

In Maya culture the sun is closely associated with new beginnings and the sun god with kingship, Houston explained. So the presence of solar visages on a temple next to a royal tomb may signify that the person buried inside was the founder of a dynasty—El Zotz’s first king.

It’s an example of “how the sun itself would have been grafted onto the identity of kings and the dynasties that would follow them,” he said in a press statement.

Maya archaeologist David Freidel added, “Houston’s hypothesis is likely correct that the building was dedicated to the sun as a deity closely linked to rulership. The Diablo Pyramid will certainly advance our knowledge of Early Classic Maya religion and ritual practice.”

Houston’s team also found hints that the Maya, who added new layers to the temple over generations, regarded the building as a living being. For example, the noses and mouths of the masks in older, deeper layers of the temple were systematically disfigured.

“This is actually quite common in Maya culture,” Houston told National Geographic News. “It’s very hard to find any Mayan depiction of the king that doesn’t have its eyes mutilated or its nose hacked … but ‘mutilation’ is not the appropriate term to describe it. I see it as more of a deactivation.

“It’s as if they’re turning the masks off in preparation for replicating them in subsequent layers … It’s not an act of disrespect. It’s quite the opposite.”

“Gold Mine of Information”

Maya scholar Simon Martin said the masks on the newfound El Zotz temple are “completely unique” and valuable, because they could help verify theories about Maya portrayals of the sun god.

“We have images of the sun god at different stages … but we’ve never found anything that puts it all together,” said Martin, of the University of Pennsylvania Museum of Archaeology and Anthropology, who was not involved in the project.

“We’ve had to assemble [the sequence] from bits and pieces of information and just trust that we got it right. This could be an opportunity to see the whole thing stage by stage.”

The temple is also wonderfully well preserved, Martin added, making it a “real gold mine of information.”

“We’ve seen a few places where whole buildings have been preserved,” he said. “But normally what happens is [the Maya] smashed up a building and then built on top of it, so when you dig into a building you don’t find very much of their decoration.”

By contrast, Maya workers at El Zotz went to great pains to preserve the original temple structure, going so far as padding it with earth and small rocks before building on top of it.

Archaeologist Karl Taube points out the craftsmanship of the masks. “They’re three-dimensional. The faces push out of the side of the facade. You don’t really see that very often … because if they project too much they fall off. But here they were able to pull it off.

“With the play of light on these things, the faces would have been extremely dramatic,” said Taube, of the University of California, Riverside (UCR),who also was not involved in the project.

Project leader Houston added that the masks’ color—crimson, according to paint traces—would have also helped them stand out. “With that bright red pigment, it would have had a particularly marked effect at dawn and at the setting of the sun,” Houston said.

Blazing red and perched on high, the Temple of the Night Sun was meant “to see and to be seen,” Houston said.

Importantly, it would have been noticeable from Tikal, a larger, older, and more powerful kingdom that El Zotz may or may not have been on friendly terms with.

“We tend to think of kings being completely autonomous, but for the Maya, a sacred king was often part of a hierarchy of kings,” the Penn Museum’s Martin said.

“So the people at El Zotz at times may have been heavily under the influence of Tikal, and when powers were weak at Tikal, they may have been completely independent or may have linked themselves with more powerful kings somewhere else.”

“A Lot More Discoveries” to Come?

Despite the obvious care that was taken to construct and preserve the newfound temple, it wasn’t used for long. Evidence at the site suggests the building was abandoned sometime in the fifth century, for reasons unknown.

“It’s like they just dropped their tools and left” in the middle of once again expanding the temple, Houston said. “I think what you’re looking at is the death of a dynasty.”

The answer to this mystery and others could become evident as more of the Temple of the Night Sun is uncovered.

“Only 30 percent of this facade has been exposed,” UCR’s Taube said. “I think there’re going to be a lot more discoveries and a broader understanding of what this building actually shows in the future.”