by National Geographic Society:  With a smart heating and cooling system and renewable energy, the city district of Västra Hamnen (Western Harbor), in Malmö, Sweden has established itself as the first carbon-neutral neighborhood in Europe, says Malmö mayor Ilmar Reepalu.Västra Hamnen, also known as the City of Tomorrow, was transformed from a former shipyard in 2001 and is now home to 4,000 people. 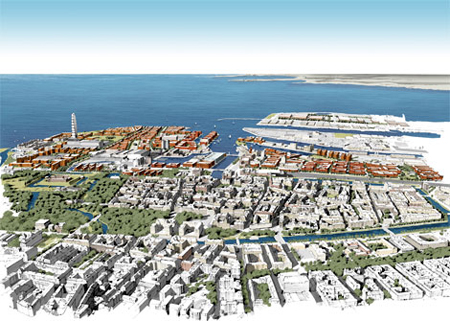 The district uses an aquifer thermal energy storage system to store water collected during the summer 70 meters (230 feet) underground and pump it up with wind energy to heat the homes during the winter. The chilled water is then reused to cool buildings in the summer.

“There’s no need for air-conditioners in the district,” Reepalu proudly told the audience at the Lee Kuan Yew World City Prize Forum, held during the World Cities Summit on July 2 in Singapore.

The city of Malmö received a Special Mention award at the Lee Kuan Yew World City Prize jointly with Copenhagen, Denmark for their “close collaboration at government and business levels, and shared vision of a holistic set of economic, environmental and socially sustainable goals.”

Reepalu said Malmö shut down its two nuclear power plants of 1,000-megawatt capacity in 2002 and 2005 respectively and the city aims to become carbon-neutral by 2030 by relying 100% on renewable energy sources. (More from Reepalu in the video below.)

Copenhagen also aspires to become the world’s first climate-neutral city by 2025. Its mayor of culture and leisure, Pia Allerslev, was present in Singapore to receive the joint award.

“We’ve invested heavily in uninterrupted cycle lanes and green waves so that cyclists can travel nonstop,” said Allerslev during her presentation.

She joked that parking lots in the Danish capital are always packed—with bicycles. It’s estimated that half of its 500,000 residents cycle on a daily basis. Furthermore, Copenhagen is expanding its existing train system to reduce car traffic and its citizens are turning idle lands into urban farms.

Three other cities and a consulting firm also received the Special Mention Award. Ahmedabad, India was recognized for its comprehensive city development plan, which is transforming public transportation, housing, and waterways in the country’s seventh largest city. Vancouver, Canada has set itself apart by successfully resisting the introduction of highways in its city center and avoiding the loss of residents to suburbs with careful, innovative planning. Across the Pacific Ocean, Brisbane, Australia is recognized for its urban renewal scheme, which turned the “country town” facing economic stagnation and urban decay two decades ago into a vibrant city.

Consulting firm HT Group AG & Sun Development received the award for its program that had helped to reduce violent crimes including rape and murder in Khayelitsha in Cape Town, South Africa with urban design and community engagement.