On August 5th 76 pyrotechnic devices aboard NASA’s next Mars rover, Curiosity, must work with zero margin for error to carry the lander to the plaent’s surface.

The Mars Science Laboratory is now well on its way to a landing at Gale Crater.

“We are definitely coming in with a bang — or a series of them,” said Pete Theisinger, Mars Science Laboratory project manager at NASA’s Jet Propulsion Laboratory in Pasadena, Calif. “You only get one shot at a Mars landing, and the pyrotechnic charges we are using are great for reliably providing instantaneous, irreversible actions like deploying a parachute or opening a fuel valve.” 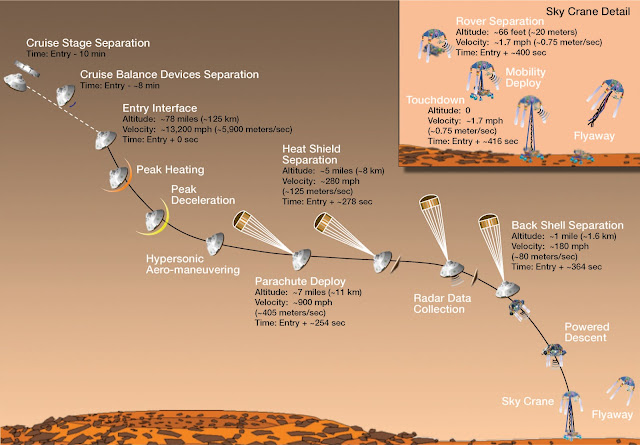 “When we need valves to open, or things to move or come apart, we want to be confident they will do so within milliseconds of the time we plan for them to do so,” said Rich Webster, a pyromechanical engineer at JPL. “With pyros, no electrical motors need to move. No latches need to be unlatched. We blow things apart — scientifically.”

Seventeen minutes before landing, the first 10 of 76 pyros will fire within five milliseconds of each other, releasing the cruise stage that provided the entry capsule (and its cocooned descent vehicle and the Curiosity rover) with power, communications and thermal control support during its 254-day journey to Mars.