Maya Calendar: World Will Not End In December 2012, Expert Says

by Erik Vance:  It’s a bright summer day at the National Museum of Anthropology in Mexico City. 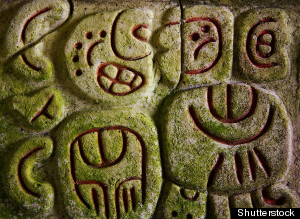 Outside, in the sprawling front plaza rimmed by palm and willow trees, young couples cuddle by the steps, vendors sell wrestling masks and tacos, and five men dressed in traditional Totonac garb slowly spin upside down in the death defying “Dance of the Flyers” for the tourists.

Inside the museum is a wonder of culture and history. Each wing is dedicated to a separate civilization in Mesoamerican culture—one for the Toltecs, another for Teotihuacan. But the largest spaces are reserved for the Aztecs and Maya. And in the center of the building is the stunning Aztec Stone of the Sun—often erroneously called the “Aztec Calendar”—perhaps the most recognizable symbol in Latin America. Diana Magaloni Kerpel, the museum director, peers at the stone.

“It is not a calendar. It’s really the image of space and time. It’s an image of how the Aztecs conceived themselves as in the center of time and space,” she says. “Look at that. There is face in the middle—that is the cosmos. The Maya wouldn’t do that—ever.”

If you have not been paying attention to doomsayers or John Cusack movies, December 21, 2012, is the day that many say the Maya predicted the world would end.Internet stories regularly detail the Maya calendars although displaying the Aztec Stone of the Sun (including one, we regret, that was published on Scientific American Online). Looking at the reality of ancient Mesoamerica, it quickly becomes clear that much of the uproar rose out of a confusion of two distinct cultures that lived 500 years apart.

“There’s a lot of conflation between these two cultures. It would almost be like comparing England at the time of the War of the Roses to the Romans or the Romans to the Greeks in the age of Pericles,” says Stephen Houston, a Mayanist at Brown University. “They are vastly different periods, separated by considerable distances. The societies had many shared features but they were organized in very different ways.”

To the average tourist, all the magnificent art here may blend together, and indeed they share many themes. But the Maya and Aztecs were very different cultures, analogous in many ways to the Greeks and Romans. Like the Greeks, the Maya were the older civilization to the east. Rather than a unified empire, they were more a collection of powerful city-states like Tikal and Calakmul, who occasionally fought each other. They also had highly realistic art and a form of mathematics far beyond that of ancient Europe.

The Aztecs (properly called the Mexica), on the other hand, ran a Romanesque, centrally organized empire with a powerful origin story for their all-powerful central city. They believed their people began in a mythical place to the north, called Aztlán. Like the Romans or the Jews before, they wandered through the wilderness, eventually reaching a giant lake in the mountains where they built Tenochtitlan—the largest city in the world at the time, now called Mexico City.

That was A.D. 1325, four centuries after the end of the great Maya era. The differences between the cultures can be seen in their art, politics and especially the way they perceived time.

Mexica mythology was full of wrath, death and enough cataclysmic destruction for a Hollywood movie. Their art evolved from highland people like the Toltecs through a tradition of sculpture. The Mexica regularly discussed the end of the world and sacrificed people to prevent it. Pieces like the Stone of the Sun or the Tlaltecuhtli monolith, discovered in 2006, were highly representational and filled with intimidating monsters. Tlaltecuhtli, the largest Mexica icon ever discovered, has claws, blood spurting from her mouth and skulls for knees. People were blocky with generic faces, almost like communist or nazi propaganda.

The Maya, in contrast, had a more fluid style of art founded by painters. They depicted people more or less how they looked, often with subtle emotions rather than blank stares. Scientists recently announced the discovery of a mural found in the home of a royal scribe in the long-forgotten Maya city of Xultun —a city now reduced to little more than mounds of rubble and vegetation in northern Guatemala. The mural depicts an actual king, rather than a god, and accurately renders his court.

The mural also showcases the unique Maya Calendar, which was wholly distinct from the calendar used by the Mexica. As with the Mexica, Maya dates combine at least two calendars—one covering 365 days and the other 260 days, such that every day had two names, which reset every 52 years. But unlike the Mexica, it also uses a “long count” system that adds a numeral at the end of a cycle to keep a constant count of years, more like the Christian calendar. “Let’s say something happened in ’76. Is that 1976 or 1776?” says Karl Taube, an iconographer at the University of California, Riverside. “Unless you have a constant chronology, we don’t really know. But with the Maya long count, we know exactly.”

This “long count” feature is how we are able to extend the Maya calendar all the way to 2012. The Mexica calendar, by contrast, simply reset at zero at the end of a cycle. The Mexica would have no way of conceiving such a specific date so far into the future.

Yet it is the Mexica, not the Maya, who trafficked in the apocalypse. The Classic Maya had almost no tradition of cataclysmic endings (though they may have picked it up centuries later from groups like perhaps the Mexica). For them, 2012 is just a year when several of their calendars reset, like 2000 for modern calendars. Taube, who is helping interpret the paintings around Xultun, says the 2012 hysteria totally misses the point. It’s not that Maya were tracking the apocalypse but that they saw significance in every new day. With multiple calendars, ancient Mesoamericans had a different combination of dates for every day, each combination having a special significance. Almost as if every day was a holiday.

“It’s a much more lush view of time,” he says. “Every day is going to have multiple, multiple inputs. It’s going to have multiple shadings of possible meaning. In a way, it’s a richly rewarding way to go through time. You are not just ticking off a day in your calendar. Each day is just percolating with all of these different meanings and recollections and hopes.”

Back at the  museum, Magaloni shakes her head over people asking about the 2012 prophecy. Museums like this, she says have a much bigger message to tell of the past. Namely, they celebrate and inform the indigenous peoples of Mesoamerica and try to uncover their culture that was nearly eradicated during the Spanish Conquest.

“The world is coming to an end in 2012—that’s an idea of the 21st century,” she says. It’s not about the world ending; it’s about cycles of time. They [the Maya] are really in love with those calculations and they are discovering the universe through their calculations.” 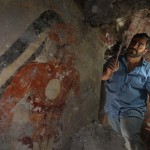 “Younger Brother Obsidian,” as labeled on the north wall of the Maya city’s house by an unknown hand, was painted in the 9th century A.D. Archaeologist William Saturno of Boston University excavates the house in the ruins of the Maya city of Xultún. Younger Brother Obsidian may have been the town scribe. Excavation and preservation of the site were supported by the National Geographic Society. 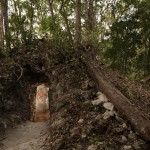 Trees grow atop a newly discovered mound over a house built by the ancient Maya that contains the rendering of an ancient figure, possibly the town scribe. The house sits at the edge of the ancient site of Xultún in Guatemala, a city that once housed tens of thousands of people. Excavation and preservation of the site were supported by the National Geographic Society. 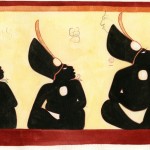 Three male figures, seated and painted in black. The men, wearing only white loincloths and medallions around their necks and a head dress bearing another medallion and a single feather, were uncovered on the ruined house’s west wall. The painting recreates the design and colors of the original Maya mural. Excavation and preservation of the site were supported by the National Geographic Society. 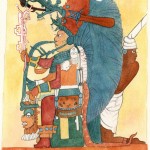 A Maya king, seated and wearing an elaborate head dress of blue feathers, adorns the north wall of the ruined house discovered at the Maya site of Xultún. An attendant, at right, leans out from behind the king’s head dress. The painting by artist Heather Hurst recreates the design and colors of the original Maya artwork at the site. The excavation and preservation of the site were supported by the National Geographic Society. 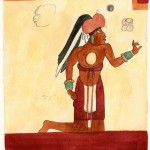 A vibrant orange figure, kneeling in front of the king on the ruined house’s north wall, is labeled “Younger Brother Obsidian,” a curious title seldom seen in Maya text. The man is holding a writing instrument, which may indicate he was a scribe. The painting recreates the design and colors of the figure in the original Maya mural. Excavation and preservation of the site were supported by the National Geographic Society. 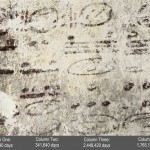 Four long numbers on the north wall of the ruined house relate to the Maya calendar and computations about the moon, sun and possibly Venus and Mars; the dates may stretch some 7,000 years into the future. These are the first calculations Maya archaeologists have found that seem to tabulate all of these cycles in this way. Although they all involve common multiples of key calendrical and astronomical cycles, the exact significance of these particular spans of time is not known. 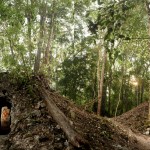 The painted figure of a man — possibly a scribe who once lived in the house built by the ancient Maya — is illuminated through a doorway to the dwelling, in northeastern Guatemala. The structure represents the first Maya house found to contain artwork on its walls. The research is supported by the National Geographic Society. 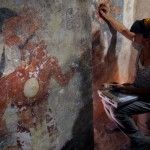 Conservator Angelyn Bass cleans and stabilizes the surface of a wall of a Maya house that dates to the 9th century A.D. The figure of a man who may have been the town scribe appears on the wall to her left. Excavation and preservation of the site were supported by the National Geographic Society. 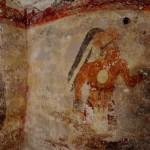 Never-before-seen artwork — the first to be found on walls of a Maya house — adorn the dwelling in the ruined city of Xultún. The figure at left is one of three men on the house’s west wall who are painted in black and wear identical costumes. Excavation and preservation of the site were supported by the National Geographic Society. 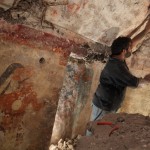 Archaeologist William Saturno of Boston University carefully uncovers art and writings left by the Maya some 1,200 years ago. The art and other symbols on the walls may have been records kept by a scribe, Saturno theorizes. Saturno’s excavation and documentation of the house were supported by the National Geographic Society.