SARAH, India — The shouts of more than a dozen Tibetan monks echo through the small classroom. Fingers are pointed. Voices collide. When an important point is made, the men smack their hands together and stomp the floor, their robes billowing around them.

It’s the way Tibetan Buddhist scholars have traded ideas for centuries. Among them, the debate-as-shouting match is a discipline and a joy.

But this is something different.

Evolutionary theory is mentioned – loudly. One monk invokes Heisenberg’s Uncertainty Principle. Another shouts about the subatomic nature of neutrinos. 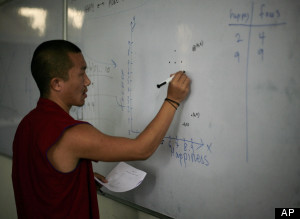 In this June 7, 2012 photo, a Tibetan Buddhist monk tries to solve a mathematical problem on a white board during a class at an educational complex in Sarah, India. Pushed by the Dalai Lama, who has became a fierce proponent of modern schooling, a series of programs were created in exile to teach scientific education to monks, the traditional core of Tibetan culture. (AP Photo/Altaf Qadri)

In an educational complex perched on the edge of a small river valley, in a place where the Himalayan foothills descend into the Indian plains, a group of about 65 Tibetan monks and nuns are working with American scientists to tie their ancient culture to the modern world.

“I’d like to go back to my monastery … to pass on my knowledge to other monks so that they might bring the (scientific) process to others,” said Tenzin Choegyal, a 29-year-old monk born in exile in India.

If that seems a modest goal, it reflects an immense change in Tibetan culture, where change has traditionally come at a glacial pace.

Isolated for centuries atop the high Himalayan plateau, and refusing entry to nearly all outsiders, Tibet long saw little of value in modernity.

Education was almost completely limited to monastic schools. Magic and mysticism were – and are – important parts of life to many people. New technologies were something to be feared: Eyeglasses were largely forbidden until well into the 20th century.

No longer. Pushed by the Dalai Lama, a fierce proponent of modern schooling, a series of programs were created in exile to teach scientific education to monks, the traditional core of Tibetan culture.

At the forefront is an intensive summer program, stretched over five years, that brings professors from Emory University in Atlanta. For six days a week, six hours a day, the professors teach everything from basic math to advanced neuroscience.

“The Buddhist religion has a deep concept of the mind that goes back thousands of years,” said Larry Young, an Emory psychiatry professor and prominent neuroscientist. “Now they’re learning something different about the mind: the mind-body interface, how the brain controls the body.”

But why are Tibetans now embracing modernity?

Many of the roots can be traced to 1959, when Chinese soldiers invaded Tibet amid an aborted uprising. The Dalai Lama and thousands of his followers fled across the Himalayas and into India, creating an exile community that now numbers an estimated 150,000 people around the world.

Beijing says Tibet is an integral part of China. And while the Dalai Lama insists he only wants autonomy for his homeland, Beijing disparages him as a quasi-terrorist intent on wresting control away from China.

The Tibetan culture, meanwhile, is increasingly imperiled. Ethnic Han Chinese, encouraged by generous government subsidies, now outnumber Tibetans in much of Tibet. The traditional Tibetan herding culture is dying out as people move to cities. Many young Tibetans now speak a tangle of Chinese and Tibetan.

The shifting cultural landscape has torn at Tibet, sparking violent uprisings every decade or so. In the most recent wave, some three dozen people have burned themselves alive over the past year in ethnic Tibetan areas of China, protesting Beijing’s policies.

Amid such tumult, the Dalai Lama – a man raised to live in regal isolation as a near-deity – has instead spent much of his life seeking ways that Tibetans can hold onto their traditions even as they find their way in the modern world.

He has encouraged modern schooling for exile children, and a democratic system to choose the Tibetan political leader (he renounced his political powers in 2011). There are job programs for the armies of unemployed young people.

And, for a few dozen monks and nuns, there is science.

The first group from the Emory program – 26 monks and two nuns – have just finished their five years of summer classes. While they earned no degrees, they are expected to help introduce a science curriculum into the monastic academies, and will take with them Tibetan-language science textbooks the program has developed.

The Dalai Lama realizes that “preservation of the culture will occur through change,” said Carol Worthman, a professor of anthropology in Emory’s Laboratory for Comparative Human Biology. “You have to change to stay in place.”

But change is a complicated thing. Particularly with a culture like this one.

The monks and nuns in the Emory program are “the best and the brightest,” Worthman said, brought to the Sarah complex from monasteries and convents across India and Nepal. While most are in their 20s or 30s, some are far older and long ago earned high-level degrees in Buddhist philosophy.

Still, few learned anything but basic math before the Emory program. Because of the way they study – focusing on debates and the memorization of long written passages, but doing comparatively little writing – few are able to take notes during classroom lectures. Many were raised to see magic as an integral part of the world around them.

To watch them in class, though, is astonishing.

No one yawns. No one dozes. Since almost no one takes notes, it’s easy to think they’re not paying attention.

But then a monk or a nun in a red robe calls out a question about brain chemistry – or cell biology, or logic – that can leave their teachers stunned.

Though most studied only religious subjects after eighth grade, they regularly traverse highly complex concepts: “They really understand how neurocircuits work at a level that’s comparable to what we see at a senior (undergraduate) neuroscience classroom in the United States,” said Young, the neuroscientist.

For most of the monastics, though, the challenges are not in the academic rigor. They see nothing astonishing about their ability to process vast amounts of information without taking notes, or to remain attentive for hours on end. It is how they have been trained.

For them, the challenges lie in weaving modern science with traditional beliefs.

The science program “was sort of like a culture shock for me,” said Choegyal, who is based at a monastery in southern India. While Tibetan Buddhism puts a high value on skepticism, conclusions are reached through philosophical analysis – not through clinical research and reams of scientific data.

So it was difficult, at first, for many of the students. And the questions ranged across science and philosophy: Are bacteria sentient beings? How does science know that brain chemistry affects emotions? Are Tibetan beliefs in mysticism provable through science?

At times, the program can seem incongruous, given the widespread belief in magic. Such beliefs go all the way to the top: The Dalai Lama still consults the official state oracle, a monk who divines the future from a temple complex not far from here.

But after five years, Choegyal says he has managed to hold onto his core beliefs while delving deeply into science.

“Buddhism basically talks about truth, or reality, and science really supports that,” he said. Questions that science cannot address, like the belief in reincarnation, he brushes aside as “subtle issues.”

Instead, he mostly finds echoes across the two cultures.

He points to karma, the ancient Buddhist belief in a cycle of cause and effect, and how it plays into reincarnation. Then he points to the similarities with evolutionary theory.

“Everything evolves, or it changes,” he said, whether in evolution or in reincarnation. “So it’s pretty similar, except some sort of reasoning.”