Seth Shostak From SETI: We WILL Find Aliens In Space

Seth Shostak, Senior Astronomer at the SETI Institute, has been patiently waiting by his computer for over two decades now, anticipating the day when some sign of Extraterrestrial Intelligence pops up on his radar screen. 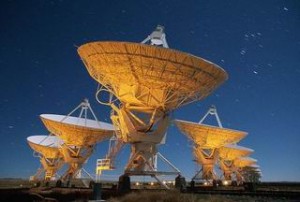 It’s been a fairly quiet job so far, but Shostak visited Singularity University on Monday with an optimistic perspective about SETI’s prospects for the near future.

With at least 10^22 stars in a universe that has been around for 14+ billion years, the odds are surely in favor for life sprouting up somewhere else besides this pale blue dot we call home. The problem at the moment is that SETI’s range is laughably small when comparing it to the scope of the cosmos; we barely get out of our own solar system let alone tap into other galaxies. But judging by the trends in technology and the advancements of SETI’s satellites, which are increasing at Moore’s Law rates, Shostak believes we will find some sort of ET in the next few decades. 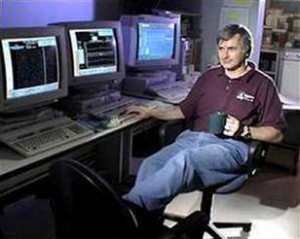 As such, Shostak spoke not about if we find aliens, but when. What will they look like? Hollywood has it all wrong, he says. The Aliens will not be bags of meat like us primitive life forms. The idea of bigger brained monsters with small noses, big eyes, and no hair is more like a rendering of what humans could look like in the future as opposed to what true aliens would look like. Rather, he suspects some type of artificial intelligent machine would be more likely what we’d find; A sort of life form that our limited scope of imagination probably can’t even conceive of. And what about the reports that aliens have secretly already visited us on earth? Shostak laughs at that notion, replying: “Do Americans really believe the same government that runs the postal service is covering up alien life?”

In the closing Q&A session Shostak touched a little more on Fermi’s Paradox –  the apparent contradiction between the likelihood that extraterrestrial civilizations exist and the lack of evidence for them. One potential solution is the Transcension Hypothesis; an idea fostered by John Smart (who graciously donated his library to us at Singularity University) suggesting that as intelligent civilizations continue to evolve, they experience a level of STEM (Space, Time, Energy, and Matter) compression that ultimately collapses into a black hole-like structure. Shostak wittingly remarked, “well, we won’t find those guys!”  But all jokes aside, the reason we haven’t met any aliens yet could just be because they don’t care about us – maybe we’re not an advanced-enough civilization to interest them for a visit.

Whatever the case may be, Shostak is on guard and ready for any signal should/when it comes in. In the meantime, we’ve got some work to do if we’d like to prove to our cosmic-brothers that were any smarter than the dinosaurs. Aside from a few stints on the moon, mankind has barely left the rock we arose from. However, with the recent successful launch from Space X,  the rover known as Curiosity scheduled to touch ground on Mars in the coming weeks, and the Google Lunar X Prize competition dated for 2015, we could be in the midst of a space renaissance. With just a little more support for Seth and his friends at NASA, who knows where we could be, or what we could know about the universe 5, 10 years from now…