It may be time to jettison the notion that robots in the future will have grippers or claws for hands. 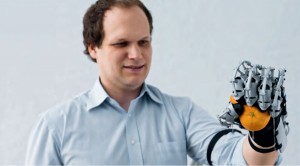 The German robotics company Festo recently unveiled the ExoHand, a sophisticated robotic hand that is capable of the fine motor skills that allows the human hand to have a delicate touch or perform complex manipulations.

The ExoHand comes in two forms: as the extremity of a robotic arm or a wearable exoskeleton glove. The system is designed so that the glove can aid assembly line workers performing repetitive tasks with their hands or be used for the remote manipulation of the robotic arm by a user wearing the glove.

At this year’s Hannover Messe industrial fair, which profiles the world’s most innovative products, the ExoHand came in second for the Best-In-Show Hermes Award. 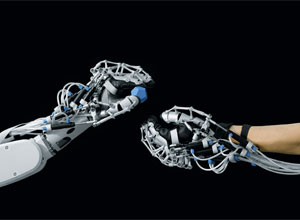 The motion of a human hand, which consists of 27 bones, is possible because of numerous muscles within the hand and forearm controlled by three different nerves, each of which has components for motor skills and sensory feedback. So mimicking the range of motion capable in a hand requires complementary components in a robotic version. The ExoHand contains eight double-acting pneumatic actuators (the black cylinders in the images) that act as the muscles of the hand, allowing for fingers to pivot and the thumb to rotate toward the palm. In each hand, eight linear potentiometers act as displacement sensors, and 16 pressure sensors provide feedback about the positions, angles, and forces of fingers. The system allows for two-way force feedback, so that a worker remotely manipulating the arm senses what the robot hand “feels”.

The ExoHand was designed for three main purposes: enhance strength and endurance for a user, extend the scope of possible actions of a robotic arm, and secure an independent lifestyle for people with impaired hand function, whether due to age, injury, or disease. The glove could be worn by assembly workers to reduce muscle fatigue and joint stress, for example, or be used in rehabilitation therapy for hand muscles that have atrophied due to injury. In fact, the company’s brochure describes a brain-computer interface that measures EEGs in the patient’s head to open and close the hand, which could help retrain the brain of stroke victims or others who have suffered brain damage.

It’s interesting that Festo opted to design a system in which the robot’s hand and user’s glove look identical, instead of creating a remote controller for the arm. Recently, researchers developed a robotic arm that can be controlled by the mind of a quadriplegic woman, which was possible in part because the areas of the brain that control the motor function of the hand are still active even if communication with the hand has been severed. By designing the ExoHand glove to look identical to the robot hand, users may forget that the robot hand isn’t their own, which will likely aid remote use.

The company has developed a number of other types of robotic arms, such as thePowerGripper modeled after a bird’s beak and the NanoForceGripper, which can handle delicate objects. Festo has also produced robotic arms that are inspired by elephant trunksand the AirArm, which mimics the range of motion possible in the human arm. Along with the company’s efforts, as well as others interested in creating gentler robotic hands as seen in Honda’s Asimo, robot hands are increasingly becoming more human-like.

Festo’s ExoHand pointedly foreshadows the coming convergence of robotics and cybernetic augmentation, and that means people will be able to do more with their lives even as they grow older and succumb to the effects of aging.

Check out the demo that shows how ExoHand can be used for remote operations: