Are Vertical Axis Turbines the Future of Offshore Wind Power?

by DAVE LEVITAN :  Vertical axis wind turbines, or VAWTs, have been around for many years. 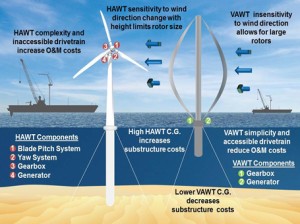 Generally they are considered less effective than the standard horizontal axis turbines that increasingly dot the landscape, but they do have their advantages. And as the U.S. pushes ever harder to join the offshore wind power party, there is renewed interest in VAWT designs for offshore use.

Sandia National Laboratories in Albuquerque, New Mexico, part of the Department of Energy (DOE), is working under a DOE-funded program to re-evaluate VAWT designs for offshore use. They say that the vertical turbines have several advantages over standard windmills. These include a lower center of gravity, reduced complexity of design, and better scalability to very large sizes.

That last characteristic is crucial, and unique to offshore wind power. Companies have been rapidly scaling up offshore turbine sizes, reaching mammoth 7-megawatt sizes in recent years. According to a Sandia press release:

Large offshore VAWT blades in excess of 300 meters will cost more to produce than blades for onshore wind turbines. But as the machines and their foundations get bigger—closer to the 10–20 megawatt (MW) scale—turbines and rotors become a much smaller percentage of the overall system cost for offshore turbines, so other benefits of the VAWT architecture could more than offset the increased rotor cost.

Still, making enormous VAWT blades is difficult. The blades are significantly curved, which becomes more and more of a manufacturing challenge as they grow in size. There is also a difficulty involved with “cyclic loading” on the drivetrain of a VAWT: the torque on the blade differs as it rotates, based on whether the blade is in the upwind or downwind position. Sandia will evaluate new rotor designs that help balance out these torque differences. The end result of this project will hopefully be some new turbines capable of filling what will theoretically be a burgeoning U.S. offshore wind market.

One of these days, offshore wind power is finally going to make it to U.S. waters; it will be nice to have a variety of high-power, high-efficiency options for turbines when that day arrives.