A new study has found that older people who take part in an eight-week program of meditation were able to reduce feelings of loneliness and boost their immune systems, 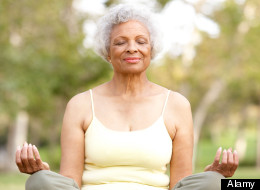 according to researchers at the University of California Los Angeles. The study is published in the current online edition of the journal “Brain, Behavior and Immunity.”

Loneliness isn’t just an emotional issue; it’s a form of stress that has been linked to ahigher risk of heart disease, Alzheimer’s, depression and early death. And it’s particularly acute among the elderly; a 2005 study found nearly 60 percent of people 70 and older experience some type of loneliness.

In the study, 40 adults between the ages of 55 and 85 were divided into two groups. One practiced mindfulness-based stress reduction (MBSR), which trains the mind to pay attention to what is happening in the moment, and “cultivate clarity, insight and understanding,” according to the Center For Mindfulness which developed the program. They attended two-hour weekly meetings and meditated at home daily for 30 minutes, as well as attending one day-long retreat. A control group did not meditate.

Researchers took blood samples at the start and end of the study to measure gene expression and levels of inflammation. Inflammation is the immune system’s natural response to injury, but chronic inflammation has been linked to heart disease, diabetes, Alzheimer’s, stroke and cancer.

The participants who meditated reported reduced feelings of loneliness, and their blood tests indicated a significant drop in the expression of inflammation-related genes. These included the marker C-reactive protein (CRP), a strong risk factor for heart disease; and a group of genes regulated by the transcription factor NF-kB — a molecular signal that activates inflammation.

“Our work presents the first evidence showing that a psychological intervention that decreases loneliness also reduces pro-inflammatory gene expression,” said senior study author Steve Cole, a UCLA professor of medicine and psychiatry, in a press release. “If this is borne out by further research, MBSR could be a valuable tool to improve the quality of life for many elderly.”

“While this was a small sample, the results were very encouraging,” noted Dr. Michael Irwin, a professor of psychiatry at UCLA’s Semel Institute for Neuroscience and Human Behavior, in a press release. “It adds to a growing body of research that is showing the positive benefits of a variety of meditative techniques, including tai chi and yoga.”