by Neil Savage:  The act of joining living tissue with electronics has long been imagined in the world of science fiction, but cybernetic organisms are now one step closer to reality thanks to work emerging from Harvard University and MIT. 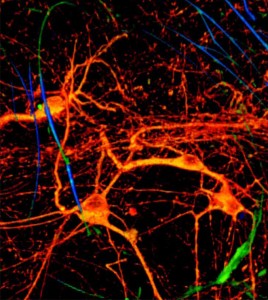 Researchers at those institutions have built tiny electronic meshes out of siliconnanowires and have used them as scaffolds to grow nerve, heart, and muscle tissue. The most immediate application of the work, described yesterday in the online edition of the journal Nature Materials, may be a new type of sensor system for in vitro testing of new drugs. But further down the road the research may lead to artificial eyes, implantable chips to control prosthetic limbs, and other devices that can communicate between electronics and living cells, says Charles Lieber, the professor of chemistry and engineering at Harvard who initiated and led the research.

“The idea was to make nanoelectronics that looks like the extracellular matrix that holds your cells together,” Lieber says. Scientists already use polymer scaffolds intissue engineering to help grow cells to replace damaged tissue in the body. The group, which also includes MIT professor Robert Langer and Harvard Medical School professor Daniel Kohane, wanted to build a functional, 3-D electronic device that could serve the same purpose.

The structure is built in layers. First the team built simple field-effect transistors (FETs) by joining pairs of silicon nanowires. Atop a nickel substrate they then added a layer of SU-8, a common photoresist material used in computer-chip manufacturing—which, as it happens, is also very biocompatible. Above that, they deposited a solution that contained the nanowire FETs, and then etched a pattern into the photoresist with beams of light, creating the basic framework for the scaffold. Finally, they added metal contacts, placed another layer of SU-8, and patterned that as well. They washed away the excess photoresist, and then removed the nickel layer, leaving behind an electronic mesh that was 90 to 95 percent open space.

“If we build some strain into it, it will spontaneously ball up, or self-assemble into a 3-D structure,” Lieber says. A porous, 3-D device is important, he explains, to be compatible with living tissue structures.

The researchers demonstrated how the device works by growing neurons from a rat’s brain in the mesh. Some of the connections that formed between neurons passed right through the FET structures. The team did the same with heart cells and applied a stimulant drug; the mesh acted as a sensor that measured how the drug made a patch of heart cells beat faster.

Pharmaceutical developers often use lab-on-a-chip technology to test drug candidates for toxicity. They might have a plate studded with liver cells and compare the effects of different chemicals on different cells. But those results can be misleading. “Cells in three dimensions behave differently than they do in a monolayer,” Lieber says.

But with a sensor embedded in a 3-D matrix, researchers could measure drug effects in a much more realistic environment. Such a sensor for pharmaceutical research could easily be developed within a couple of years, Lieber says.

“Going 3-D is the trend, and also the next biggest challenge, in nanosystem-based applications,” says Min-Feng Yu, a nanomaterials expert at Georgia Tech. He called the work “the first but significant step toward this line of research.”

Along with being three dimensional, the fact that the devices are on the same scale as cells is also important, Lieber says. Today doctors use large electrodes to try to measure brain or muscle signals to control a prosthetic limb. This work holds the promise of smaller, noninvasive, and more sensitive interfaces. “Cyborg-type things, which are very different than embedding a conventional chip into the body, are going to be possible,” Lieber says.

Potential applications could include implanting a nanodevice to monitor diabetics’ insulin levels without a needle prick, or a sensor to keep track of plaque buildup in patients at risk for a heart attack, Lieber suggests. His lab is working on building a device that incorporates photodetectors, which could be implanted into the eyes of blind people to restore their sight. The biggest hurdle, he says, is facilitating communication between the electronics and the cells to get the desired reaction. That might mean building chips that release some biochemical signal in response to a change in voltage or current. Going in the other direction, having cells cause a reaction in the electronics, is relatively easy, he says.

Lieber acknowledges that the work may conjure images of humans being turned intothe Borg, Star Trek’s cybernetic collective, but naturally he takes a more optimistic view. “I think there’s a lot of benefits,” he says.

Neil Savage, based in Lowell, Mass., writes about strange semiconductors and amazing optoelectronics. In July 2012, he reported on slim vertical lasers that could link computer chips with light.