ReadySet Solar Charger Successful In Africa Now Headed To US

by David J. Hill:  Want renewable energy in a small, portable package? Then the ReadySet solar charger by Fenix International may be the closest thing to a perfect on-the-go kit for anyone excited about solar power. 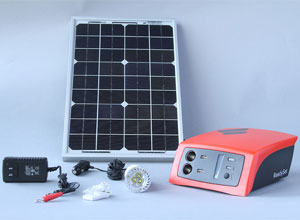 The charger was initially developed to help rural people in Africa power their cell phones, but recently it closed out a Kickstarter campaign in which the project earned over 5 times the funding target. It may not be able to power your house, but this kit just might be the thing to charge up all your electronics in a way that makes you feel good about your carbon footprint.

The key components of the ReadySet kit are a modest solar panel and a battery. The 15 Watt monocrystalline solar panel is weatherproof and waterproof, and its size makes it portable enough to set up pretty much anywhere. The battery can store 54 Watt-hours of energy — enough to provide 10 iPhone charges or power an iPad for 12 hours. On the front are two 12V cigarette ports and two 5V USB ports, allowing for a variety of devices to be plugged in. On the back of the battery are standard positive and negative terminals. Additionally, the kit comes with a 3V LED light and a USB universal adapter that can charge any 3.7V lithium battery. ReadySet aims to be a versatile solution to powering electronic devices.

With the solar panel, the battery can be charged in 6 hours, but an AC adapter included in the kit allows the battery to be plugged into an outlet, if tapping into the grid was warranted. Additionally, Fenix sells a separate bicycle adapter called the Velo that can provide enough energy to charge one mobile phone in under 10 minutes of pedaling. The company also is working on a micro-wind power option.

To get the word out about ReadySet, Fenix launched on Kickstarter in July with a modest goal of $20,000, which could be achieved with only 100 backers. The project was funded successfully with 522 backers providing $112,000.

Although it is now being marketed in the US as a cool and convenient way to charge devices, the initial goal behind the kit was much different. ReadySet was designed to not only be a means of charging phones, but a way for impoverished people to go into business for themselves by charging mobile phones as a service. Because the device is so portable, one person could power a whole village worth of phones. According to GOOD, the cost of the kit in Africa is $150, and even by charging only $0.25 per phone, an individual could potentially earn $50 a month, factoring in the additional fuel savings cost from using the LED light instead of a kerosene lamp. Fortunately, Fenix found a mobile phone partner to help market the device and sell about 2,000 kits.

By all accounts, the Kickstarter fundraising campaign was a success, but a closer look at the details of the campaign reveal the challenge that Fenix faces in bringing the kit to the US with a retail price of $300. The early bird reward (100 kits) knocked off $100 from the retail price while the early adopter reward (200 kits) gave a $75 discount, and it isn’t surprising that those were gobbled up. But the next “Trendsetter” tier that sold the kit for $249 only picked up 66 backers, leaving 234 kits at this price on shelves.

This might suggest that a $200 retail cost would be more appropriate for consumers, especially when it is being pitched as a cool thing to have on a camping trip, not a way to migrate into off-grid living. Furthermore, some may view the kit as a luxury, something that you’d order out of an in-flight magazine, rather than a much needed energy and income solution for people struggling for survival.

As demonstrated by ReadySet, solar power is becoming cheaper and easier for average people to tap into. Hopefully, kits like this (but significantly more affordable) will be widely available sooner than later and people everywhere can see just how much solar is a part of the future.