More than any other part of the brain, the cerebral cortex makes us human. Through the electrical activity of the neuronal networks packed into the brain’s undulating outer surface we sense our environment, use and understand language, and separate good and evil. 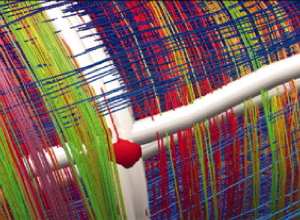 So, then, the biologist’s mantra, “form follows function,” means that when we learn about brain structure, we learn about our very nature. Last March a team of scientists used a new and powerful scanner to peer into the cerebral cortex and other underlying structures with an unprecedented level of resolution. What they found surprised them: rather than an incomprehensible bundle of twists and turns, the basic structure of the brain is a simple, three-dimensional grid. The new discovery could guide neuroscientists as they study the brain’s form and function, and lead to new insights into the organizing principles of the brain.

The grid structure was seen in our brains and those of our primate cousins as well. Scans were performed on the postmortem brain of four different monkey species – rhesus, marmoset, owl, and galago – as well as on the brains of living humans. Zooming in on major brain pathways they continually observed other pathways that crossed perpendicularly to form checkerboard-like, two-dimensional sheets. These 2D sheets stacked up alongside adjacent 2D sheets to form a 3D grid. And, it turns out, that the grid pattern is not only found in the cortex but is continuous with lower brain structures including centers for memory and emotion.

“Brain wiring is not like the wiring in your basement, where it just needs to connect to the right endpoints,” says Van Wedeen of the Massachusetts General Hosptial’s A.A. Martinos Center for Biomedical Imaging and Harvard Medical School and lead author of the study. “Rather, the grid is the language of the brain and wiring and rewiring work by modifying it.”

The following is a short clip that gives a great sense of how the brain’s underlying connections resemble neatly organized strips of ribbon wire. The grids are formed when these bands of parallel neurons cross perpendicularly.

The study, which was published in Science, is part of the Human Connectome Project, a multi-institutional and controversial effort to completely map the brain’s neurons and their connections across individuals and species.

Chemical tracer studies in past experiments with animals have suggested a grid structure, but until now researchers have not been able to achieve this level of imaging resolution. But the new“Connectom” scanner, installed at the Martinos Center last year, has a resolution 10 times greater than conventional scanners. A technique called diffusion spectrum imaging (DSI) is a variant of magnetic resonance imagine (MRI) in which a magnetic field to map the water contained in neuron fibers, thus mapping their criss-crossing patterns. DSI has been performed in the past, but the Connectom uses a much stronger magnetic field to achieve its 10-fold jump in resolution.

Like the coordinated playing of keys on a piano, the neurons in a network must be activated in a coordinated, often simultaneous, manner. The way in which the brain brings about the precisely coordinated activation of distant neurons is one important question today’s neuroscientists are trying to answer. The straight paths and right corners of a neuronal grid could mean that the solution to linking neurons together could be structurally simpler than previously thought. A grid also aids researchers by providing them a simple framework and “natural coordinate system” with which to study the behavior of neuronal networks. Revelation of the 3D structure strongly suggests that the mature brain follows the same wiring rules that guide development of the young cortex when pathways lengthen horizontally, vertically, and transversely, resulting in a 3D grid. The fact that we see the same pattern in the mature brain means the wiring of the mature brain preserves the same basic rules that guide the brain during embryonic development. The grid then serves as a template upon which neuronal rewiring can occur through genetic, environmental, or pathological influences. As more people are scanned scientists will be able to quantify how brain wiring at this level differs between individuals. Thomas Insel, Director of the National Institute of Mental Health, suggests that understanding these differences could lead to new ways to diagnose and treat brain disorders.

Eric Kandel, winner of the 2000 Nobel Prize for his work on learning and memory, once wrote, “What we commonly call the mind is a set of operations performed by the brain.” Taking a similar reductionist approach, the Human Connectome Project seeks to map the 100 billion neurons in our brain to an unprecedented level of detail in hopes that new insights about structure will lead to new insights about function. But while the 3D grid structure revealed by the current study is certainly fascinating, it remains to be seen if the new knowledge will be of any practical use.Critics of the Human Connectome Project doubt that mapping brain structure will do much to advance understanding of brain function, and think the millions invested in the project would be better spent on other research. But even these critics have to be excited about the unveiled 3D grid of the brain. Whether or not the finding leads to others, it is already a breakthrough by itself.