by Peter Murray: what’s being claimed a world first, doctors have implanted a bionic eye into a woman, allowing her to see flashes of light. 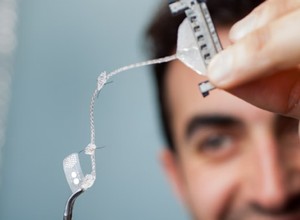 The early stage prototype performed well as a proof-of-principle, offering hope to blind people around the world that bionic implants could restore part of their vision in the coming decade.

Dianne Ashworth’s vision was severely impaired due to retinitis pigmentosa, an inherted disease that damages the retina. A technology enthusiast herself, she eagerly volunteered to undergo the first surgery of its kind in hopes that her vision might be restored.

The rationale behind the bionic implant is to replace the damaged retinal cells with electrodes that stimulate the nerves which connect to the visual cortex. A 24-electrode array was placed at the back of the eye just beneath the retina. From the array a wire extends back and connects to a device just behind the ear.

The following short animation gives you a good idea how the devices is implanted.

The surgery, led by the Bionics Institute Director, Professor Rob Shepherd, took place this past May at the Royal Victorian Eye and Ear Hospital in Australia. One month after the procedure, the implant was turned on.

Ashworth described the experience in a press release: “I didn’t know what to expect, but all of a sudden, I could see a little flash…it was amazing. Every time there was stimulation there was a different shape that appeared in front of my eye.”

The implant doesn’t have a camera or any other way to detect light. The flashes that Ashworth saw were produced manually by the research team. They’ll work with Ashworth to determine the size, brightness, and visual field location of the flashes. They will then modify their stimulation settings so that Ashworth’s flashes correlate with the actual visual scene facing her. Likewise, Ashworth and others receiving the implant will need to be trained to interpret how the artificial flashes correlate to real light from their surroundings.

The flashes are only the beginning. The team acknowledges that much work lies ahead before they will be able to use the flashes to build actual shapes for Ashworth. But even the best optimization would still leave much to be desired, considering the implant has just 24 electrodes. More electrodes could produce more flashes, technically referred to as ‘phosphenes,’ and thus provide more detail about the patient’s surroundings. That’s why the team is currently developing a 98-electrode implant that would widen the field of view, and a separate 1024-electrode that would impart a high enough acuity to recognize faces. Right now the bionic implant is specifically targeted toward people with retinitis pigmentosa and age-related macular degeneration. But as the research continues, the team hopes that the implant with eventually help people with other types of visual impairments as well.

Clearly the technology is a long way from restoring a blind person’s vision anywhere close to the visual acuity of people with normal sight. But Bionic Vision Australia, the consortium of researchers that developed the implant, has a less ambitious goal that would nevertheless make a huge difference – to increase a blind person’s mobility. If they could restore sight enough to pick out edges and objects – see the steps of a flight of stairs or read large print, for instance – it would allow for much easier navigation. Just allowing them greater, vision-enabled mobility would greatly increase quality of life.

The implant surgery may sound invasive, but according to the surgeons it is a relatively simple procedure that can be taught easily to surgeons around the world – good news for blind people outside of Australia. According to the World Health Organization, 39 million people worldwide are blind and another 285 million have low vision. The present device may be touted as the first bionic implant, but one notable device has been in development for several years now, and has already gotten promising results. The Argus has an external, wearable camera that transmits wirelessly to an array of more than 60 electrodes implanted in the retina. The Argus II wasapproved last year for sale in Europe, and it is currently being evaluated in clinical trials in the US. Just as the Australian implant aims to achieve, the Argus has already been shown to allow the visually impaired to make out the edges and outlines of shapes.

Whether or not the bionic implant is a “world’s first,” as study participant Penny Allen at the Centre for Eye Research Australia attests, it’s certainly worth getting excited about. Conveying visual input to the brain any where near as effectively as the retina is an incredibly difficult technological challenge. The more minds bent on overcoming that challenge, the better.