by Jason Dorrier:  Usain Bolt, the fastest human in history, has been outpaced by a robot. 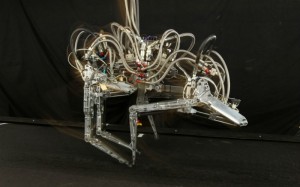 Catchy hook, huh? Fact is, Boston Dynamics’ Cheetah was outrunning the rest of us six months ago when it clocked its then record-breaking 18 mph. Now, a mere six months on, the Cheetah has shattered its own record—better algorithms and more power pushed it to 28.3 mph.

The real wonder is how quickly the company moved from vague conceptual sketch to super speedy prototype.

Check out the Cheetah in its natural habitat here:

The Cheetah first hit headlines in late February 2011. Boston Dynamics had won its latest contract from the Defense Advanced Research Projects Agency (DARPA) with a vague sketch and a big promise—to run faster than the fastest human. A year later the firm’s working prototype broke the 1989 robotic speed record of 13.1 mph when it ran 18 mph. And now it’s faster than Usain Bolt. Boston Dynamics made this sketch into a functional 28.3 mph robot in 18 months.

Upping the Cheetah’s speed isn’t simply about power—it’s about  conquering the complexity of a four-legged animal’s stride. Gill Pratt, DARPA program manager says, “Our cheetah bot borrows ideas from nature’s design to inform stride patterns, flexing and unflexing of parts like the back, placement of limbs and stability.” Getting that complicated series of steps to flow together is no mean feat.

The robot’s speed is impressive, but there are caveats aplenty. The Cheetah still runs on a treadmill, supported by a boom and powered by an offboard hydraulic pump. It’s a fragile-looking jumble of wires, hardly prepared for its first 30 mph wipeout.

How can the firm move from the lab to the real world in just a few months? It’ll build on already proven technology—the Cheetah isn’t the firm’s first headline hogging robot.

DARPA is funding Boston Dynamics to create a line of tough robots to partner with soldiers and go where wheeled or treaded vehicles can’t. Earlier web sensations include BigDog, AlphaDog,PETMAN, and SandFlea, among others.

BigDog can travel over very rough terrain (snow, mud, rocks, hillsides) righting itself as it goes. PETMAN can perform complex motions (push up, squat and turn, or kneel) and likewise can adapt on the fly. Why not the WildCat? The conceptual sketch of the WildCat indicates it will have an onboard motor and a rugged cage to protect the electronics. Meanwhile, the robot’s flexible spine is designed so it can “zigzag to chase and evade.” Agility at its lab demonstrated speed could make for a pretty fearsome ‘bot in the field.

Ultimately, Boston Dynamics hopes the Cheetah’s offspring will manuever at speeds of 50 mph and more. DARPA aims to use them in rough terrain for “emergency response, humanitarian assistance, and other defense missions.”

Whatever the military uses, Boston Dynamics continues to push the envelope with its robotic creations. The techniques they’re learning now could very well find commercial or private applications in future robotic beasts of burden—lightening the load for us humans at home and work.