Can high speed rail compete with self-driven cars and all the technology of the future?

by Brad Templeton:  There’s been much debate in the USA about High Speed Rail (HSR) 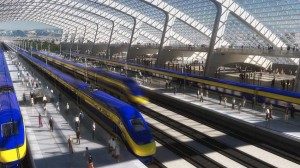 and most notably the giant project aimed at moving 20 to 24 million passengers a year through the California central valley, and in particular from downtown LA to downtown San Francisco in 2 hours 40 minutes.  There’s been big debate about the projected cost ($68B to $99B) and the inability of projected revenues to cover interest on the capital let alone operating costs. The project is beginning with a 130 mile segment in the central valley to make use of federal funds. This could be a “rail to nowhere” connecting no big towns and with no trains on it. By 2028 they plan to finally connect SF and LA.

The debate about the merits of this train is extensive and interesting, but its biggest flaw is that it is rooted in the technology of the past and present day. Indeed, HSR itself is around 50 years old, and the 350 kph top speed of the planned line was attained by the French TGV over 30 years ago.

The reality of the world, however, is that technology is changing very fast, and in some fields like computing at an exponential rate. Transportation has not been used to such rapid rates of change, but that protection is about to end. HSR planners are comparing their systems to other 20th century systems and not planning for what 2030 will actually hold.

At Singularity University, our mission is to study and teach about the effects of these rapidly changing technologies. Here are a few areas where new technology will disrupt the plans of long-term HSR planners:

Cars that can drive and deliver themselves left the pages of science fiction and entered reality in the 2000s thanks to many efforts, including the one at Google. (Disclaimer: I am a consultant to, but not a spokesman for that team.) By 2030 such vehicles are likely to be common, and in fact it’s quite probable they will be able to travel safely on highways at faster speeds than we trust humans to drive. They could also platoon to become more efficient.

Their ability to deliver themselves is both boon and bane to rail transit. They offer an excellent “last/first mile” solution to take people from their driveways to the train stations — for it is door to door travel time that people care about, not airport-to-airport or downtown-to-downtown. The HSR focus on a competitive downtown-to-downtime time ignores the fact that only a tiny fraction of passengers will want that precise trip.

Self-delivering cars offer the option of mobility on demand in a hired vehicle that is the right vehicle for the trip — often a light, efficient single passenger vehicle that nobody would buy as their only car today. These cars will offer a more convenient and faster door-to-door travel time on all the modest length trips (100 miles or less) in the central valley. Because the passenger count estimates for the train exceed current air-travel counts in the state, they are counting heavily on winning over those who currently drive cars in the central valley, but they might not win many of them at all.

The cars won’t beat the train on the long haul downtown SF to downtown LA. But they might well be superior or competitive (if they can go 100mph on I-5 or I-99) or the far more common suburb-to-suburb door to door trips. But this will be a private vehicle without a schedule to worry about, a nice desk and screen and all the usual advantages of a private vehicle.

The air travel industry is not going to sit still. The airlines aren’t going to just let their huge business on the California air corridor disappear to the trains the way the HSR authority hopes. These are private companies, and they will cut prices, and innovate to compete. They will find better solutions to the security nightmare that has taken away their edge, and they’ll produce innovative products we have yet to see. The reality is that good security is possible without requiring people arrive at airports an hour before departure, if we are driven to make it happen. And the trains may not remain immune from the same security needs forever.

On the green front, we already see Boeing’s new generation of carbon fiber planes operating with less fuel. New turboprops are quiet and much more efficient, and there is more to come.

The fast trains and self-driving cars will help the airports. Instead of HSR from downtown SF to downtown LA, why not take that same HSR just to the airport, and clear security while on the train to be dropped off close to the gate. Or imagine a self-driving car that picks you up on the tarmac as you walk off the plane and whisks you directly to your destination. Driven by competition, the airlines will find a way to take advantage of their huge speed advantage in the core part of the journey.

Self-driving cars that whisk people to small airstrips and pick them up at other small airstrips also offer the potential for good door-to-door times on all sorts of routes away from major airports. The flying car may never come, but the seamless transition from car to plane is on the way.

We may also see more radical improvements here. Biofuels may make air travel greener, and lighter weight battery technologies, if they arrive thanks to research for cars, will make the electric airplane possible. Electric aircraft are not just greener — it becomes more practical to have smaller aircraft and do vertical take-off and landing, allowing air travel between any two points, not just airports.

These are just things we can see today. What will the R&D labs of aviation firms come up with when necesessity forces them towards invention?

Rail technology will improve, and in fact already is. Even with right-of-way purchased adaptation of traditional HSR to other rail forms may be difficult. While expensive, maglev trains have seen some limited deployment, and while also expensive and theoretical, many, including the famous Elon Musk, have proposed enclosed tube trains (evacuated or pneumatic) which could do the trip faster than planes. How modern will the 80s-era CHSR look to 2030s engineers?

Decades after its early false start, video conferencing is going HD and starting to take off. High end video meeting systems are already causing people to skip business trips, and this trend will increase. At high-tech companies like Google and Cisco, people routinely use video conferencing to avoid walking to buildings 10 minutes away.

Telepresence robots, which let a remote person wander around a building, go up to people and act more like they are really there are taking off and make more and more people decide even a 3 hour one-way train trip or plane trip is too much. This isn’t a certainty, but it would also be wrong to bet that many trips that take place today just won’t happen in the future.

Like it or not, sprawl is increasing. You can’t legislate it away. While there are arguments on both sides as to how urban densities will change, it is again foolish to bet that sprawl won’t increase in many areas. More sprawl means even less value in downtown-to-downtown rail service, or even in big airports. Urban planners are now realizing that the “polycentric” city is the probable future in California and many other areas.

That Technology Nobody Saw Coming

While it may seem facile to say it, it’s almost assured that some new technology we aren’t even considering today will arise by 2030 which has some big impact on medium distance transportation. How do you plan for the unexpected? The best way is to keep your platform as simple as possible, and delay decisions and implementations where you can. Do as much work with the knowledge of 2030 as you can, and do as little of your planning with the knowledge of 2012 as you can.

That’s the lesson of the internet and the principle known as the “stupid network.” The internet itself is extremely simple and has survived mostly unchanged from the 1980s while it has supported one of history’s greatest whirlwinds of innovation. That’s because of the simple design, which allowed innovation to take place at the edges, by small innovators. Simpler base technologies may seem inferior but are actually superior because they allow decisions and implementations to be delayed to a time when everything can be done faster and smarter. Big projects that don’t plan this way are doomed to failure.

None of these future technologies outlined here are certain to pan out as predicted — but it’s a very bad bet to assume none of them will. California planners and the CHSR authority need to do an analysis of the HSR operating in a world of 2030s technology and sprawl, not today’s.