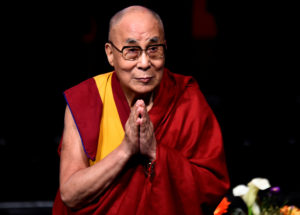 Example of Teaching
“Love and compassion are necessities, not luxuries. Without them humanity cannot survive.”

The Art of Happiness, 10th Anniversary Edition: A Handbook for Living

Beyond Religion: Ethics for a Whole World

How to Practice : The Way to a Meaningful Life

His Holiness the Fourteenth Dalai Lama, Tenzin Gyatso, was born on July 6, 1935 to a peasant family in the small village of Taktser in northeastern Tibet and was recognized at the age of two as the reincarnation of His predecessor, the Thirteenth Dalai Lama. The Dalai Lamas are the manifestations of the Buddha of Compassion, who chose to take rebirth to serve humanity. Dalai Lama means Ocean of Wisdom; Tibetans normally refer to His Holiness asYizhin Norbu, the Wish-Fulfilling Gem, or simply Kundun the Presence.

In 1937 high lamas and dignitaries were sent throughout Tibet to search for the reincarnated Dalai Lama. In Takster they found such a place, as was visioned, and went to the house, with Kewtsang Rinpoche disguised as a servant and a junior monk posing as the leader. The Rinpoche was wearing a rosary of the Thirteenth Dalai Lama and the little boy, recognizing it, demanded that it be given to him. This was promised, if the child could guess who the wearer was. The reply was Sera aga (in the local dialect, a monk of Sera). The boy was also able to tell who the real leader and servant were. After many further tests, the Dalai Lama was enthroned in 1940.

His Holiness began his monastic education at the age of six.  The curriculum consisted of five major and five minor subjects.  The major subjects were logic, Tibetan art and culture, Sanskrit, medicine, and Buddhist philosophy which was further divided into a further five categories: Prajnaparimita, the perfection of wisdom; Madhyamika, the philosophy of the middle Way; Vinaya, the canon of monastic discipline; Abidharma, metaphysics; and Pramana, logic and epistemology.  The five minor subjects were poetry, music and drama, astrology, motre and phrasing, and synonyms.

In 1950, at the age of sixteen and still facing nine more years of intensive religious education, His Holiness had to assume full political power when China invaded Tibet. In March of 1959, during the national uprising of the Tibetan people against Chinese military occupation, He went into exile. Since then He has lived in the Himalayan foothills in Dharamsala, India, the seat of the Tibetan Government-in-exile, a constitutional democracy since 1963.

Meanwhile, the Fourteenth Dalai Lama, unlike His predecessors who never came to the West, continues His world-wide travels, eloquently speaking in favor of ecumenical understanding, kindness and compassion, respect for the environment and, above all, world peace.

His Holiness the Dalai Lama is a man of peace.  In 1989 he was awarded the Nobel Peace Prize for his non-violent struggle for the liberation of Tibet.  He has consistently advocated policies of non-violence, even in the face of extreme aggression. He also became the first Nobel Laureate to be recognized for his concern for global environmental problems.  His Holiness has also authored more than 72 books.

His Holiness describes himself as a simple Buddhist monk.

Thanksgiving as a sign of intelligent life? So says the Dalai Lama.

India Should Share Its Ancient Knowledge With The World: The Dalai Lama

How The Dalai Lama Is Chosen

The Blessing of Being Happy – The Dalai Lama

The Future is in Our Hands – The Dalai Lama

Dalai Lama Speaks Out On COVID-19

Leonard Cohen Narrates Film on The Tibetan Book of the Dead, Featuring the Dalai Lama (1994)