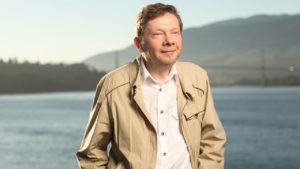 Foundation of Teaching
Self-Realization, Presence, Non-Duality, The Power of Now

Example of Teaching
“The past has no power over the present moment.”

The Power of Now: A Guide to Spiritual Enlightenment

Eckhart is a spiritual teacher and author who was born in Germany and educated at the Universities of London and Cambridge. His partner in life, Kim Eng, is a counselor and public speaker, as well as a facilitator of Presence through Movement workshops.

At the age of 29, a profound inner transformation radically changed the course of his life. The next few years were devoted to understanding, integrating and deepening that transformation, which marked the beginning of an intense inward journey.

Later, he began to work in London with individuals and small groups as a counselor and spiritual teacher. Since 1995 he has lived in Vancouver, Canada. Eckhart Tolle is the author of the #1 New York Times bestseller “The Power of Now” (translated into 33 languages) and the highly acclaimed follow-up “A New Earth,” which are widely regarded as two of the most influential spiritual books of our time.

Eckhart’s profound yet simple teachings have already helped countless people throughout the world find inner peace and greater fulfillment in their lives. At the core of the teachings lies the transformation of consciousness, a spiritual awakening that he sees as the next step in human evolution. An essential aspect of this awakening consists in transcending our ego-based state of consciousness. This is a prerequisite not only for personal happiness but also for the ending of violence on our planet.

Eckhart is a sought-after public speaker and teaches and travels extensively throughout the world. Many of his talks, intensives and retreats are published on CD and DVD. Most of the teachings are given in English, but occasionally Eckhart also gives talks in German and Spanish. In addition to “The Power of Now” and “A New Earth,” Eckhart has written a book designed for meditative reading entitled Stillness Speaks. A book consisting of selections from “The Power of Now” is also available, entitled “Practicing the Power of Now.”

Can We Overcome Thoughts of Depression? – Eckhart Tolle

The Opportunity In Adversity – Eckhart Tolle

There Is Another Way | Special Teaching from Eckhart Tolle

Kim Eng: What Is The Unmanifested Yin And Yang?

How Can I Decide Who Is To Be My Partner?

You Are The Universe – Eckhart Tolle