by Jenny Kleeman: In the sticky monsoon heat of early August in Kerala, I was standing on a stage in front of thousands of people, waiting for my turn to get a hug from a living god Amma. 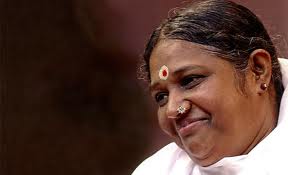 The crowd jostling around me had been queuing for eight hours. Some people had travelled across the world to be here. Among the Indian voices, I could hear German, French, Spanish, American and English accents. Grown men were shaking as they approached the front of the queue, their faces wet with tears.

At the centre of the stage, in between two electric fans, sat a small, grey-haired figure. Mata Amritanandamayi Devi – “mother of immortal bliss”, otherwise known simply as Amma, or “mum” – is said to be the divine embodiment of pure, selfless love. This 55-year-old is believed by her followers to have been born with the unique ability to touch a person’s emotional core and solve all the troubles of modern life, just through a hug.

The man in front of me told me he had travelled from New Delhi with his wife and young son. “All my body is in pain. I’ve been to many hospitals,” he said, gesturing to his shoulders and knees, “but once Amma is hugging me, all my problems will be gone, for sure.”

When I finally reached the front of the queue, I could see that Amma’s white sari was smeared with makeup from where devotees had been sobbing at her breast all morning. She saw I had noticed and laughed, looking me deep in the eyes, holding my gaze for as long as I could bear it. Then a hand on my shoulder pushed me down gently to kneel before her, and she pressed my head to her soft, round body.

It was a lovely hug. Unrushed, despite the thousands of others waiting for their turn behind me. Her hand rubbed up and down my back in long, slow, soothing strokes, like a mother would comfort a crying baby. She whispered something unintelligible in my ear, a secret but incomprehensible blessing, just for me. Then she kissed my cheek, smiled, and handed me an apple and a sweet. It was probably the most enjoyable hug I’ve had from a stranger. But nothing more than that. For me, there was nothing spiritual about it.

Then again, I wasn’t here to worship the mother of immortal bliss but to learn about Kerala’s godmen – the 3,000 or so gurus who claim to have divine powers. Many will only use their self-proclaimed abilities for a fee, and some are prepared to defraud, assault and sexually abuse the vulnerable people flocking to them in greater numbers than ever before.

No one has ever made any allegations of this kind about Amma. I went to her ashram at Amritapuri, on India’s south-western coast, because she is the most famous – and richest – of Kerala’s godmen. She has a reputation for being particularly adept when it comes to attracting funds, sometimes from followers so devoted they are prepared to work for her for free and give every penny they have to her organisation.

My hug with Amma felt like an intimate experience, but it’s one she has already shared with more than 30 million people around the world. She will be sharing it with British devotees for three days from Sunday, when her European tour reaches London’s Alexandra Palace. All this, despite the fact that she was born into the “untouchable” caste – a group traditionally considered so low they had to be segregated from the rest of Indian society in case they contaminated them.

Hugging has made Amma the most powerful woman in Kerala. Ten thousand devotees from all over the world now live with her in her ashram, which receives more than £10m a year in foreign donations – more than any other organisation in the state. Most people earn less than £2 a day in this part of India, and it’s a staggering amount of money for one woman to command. But Amma is also famously generous. After her ashram survived the 2004 Boxing Day tsunami she donated £12m in aid to victims. She has also founded schools, hospitals and orphanages with the money given to her by her followers in the 30 years she has been giving out hugs.

Amma’s success has been mirrored by the growth of Kerala as a tourist destination. It is one of the most intensely religious places on earth, home to Hindus, Muslims, Christians and even a small but longstanding population of Indian Jews. The tourist board know that spirituality is a major draw for visitors and their wallets, and so they have adopted the slogan “God’s Own Country” to promote the state.

I had imagined the sort of people who come to Kerala searching for spiritual enlightenment would want to immerse themselves in Indian culture, so it was a surprise to find that Amma’s western devotees keep their distance from her Indian followers. They live in different parts of the ashram, do different daily chores and eat at different tables – their food is even cooked in separate kitchens.

Every western need is catered for. There’s a cafe that serves perfect cappuccinos, lattes, pizzas and burgers, an in-house travel agent, an internet centre and a souvenir stand that sells everything from books, posters, DVDs and CDs to Amma dolls, calendars, fridge magnets and soap. I saw thousands of rupees being handed over to the cashiers in one afternoon alone.

Most of this stuff is made within the ashram itself – sometimes by way of a rather ingenious production line. Devotees buy apples, oranges and bananas from stalls next to the stage to give Amma as an offering when they go up to get a hug. The vast amounts of fruit Amma accumulates every day is turned into juice, which is sold back to other devotees at the juice stand.

The press officer assigned to look after me – a Californian man known as Gautam – kept one eye closely trained on my every move, and the other on an ever-blinking BlackBerry. It was soon clear that this wasn’t a humble place of pilgrimage – it was the centre of an empire.

When I spoke to some of the live-in devotees, I realised that they see their connection with Amma as the strongest relationship in their lives. In the westerner’s cafe, I got talking to white-robed, Bradford-born Vani. She was 22, but hadbeen a devotee since she was 12, after she had her first hug on one of Amma’s European tours. Since then, she had spent everything she had on Amma’s organisation, taking summer jobs and using money left to her by her grandparents to pay for trips to Amritapuri, before moving here permanently four years ago. She saw her family once a year, when she accompanied Amma on her overseas tour. I wondered whether Amma felt like more of a mother to her than her real mother. “Oh yeah. Well . . .” Vani squirmed. “I’m scared of hurting my real mother, but I do feel . . . Yes, I see her as my mother, definitely.”

The following morning, after a breakfast of banana pancakes and Americano coffee, I joined a group of six western women heading off to work in the nearby fields. All devotees are encouraged to carry out unpaid work for the organisation, a kind of voluntary service they call “seva”. This group was tasked with harvesting a herb called tulsi. Its leaves are made into traditional Indian medicines or woven into garlands that devotees will buy and give Amma as an offering.

“I love seva,” beamed Jane Bassett, 43, and originally from Plymouth. “You feel really alive. It’s selfless service. I saw Amma at two o’clock this morning, and there’s something about the qualities of her that bring out the best qualities in you and you just want to work for good.”

“I also clean Amma’s path as well,” she added, proudly. “I clean her steps, and the ramp up to the stage.” I could tell this was a coveted job. She felt lucky to have it.

It was a feeling echoed by Lola, the most longstanding devotee to work in the tulsi field. She left Chicago to live in the ashram 11 years ago.

“I had everything. I went to school, I had a car, I had an apartment, I had a boyfriend,” she told me, brushing mud from her white sari. “Then my mom became very sick with brain cancer.

I was just drawn to Amma at that time of my life, and this was the only place I wanted to be.”

Amma is in greater demand now than at any other time in her spiritual career. Perhaps her popularity says more about us than it does about her. It’s so rare to have someone look you straight in the eye and hold you unconditionally in their arms that it can become a religious experience for some people. You don’t need to learn yoga or Sanskrit or study any kind of ancient text to be part of Amma’s religion, you just need to be able to receive a hug. In a world where public figures are lofty and removed from ordinary people, she looks accessible, approachable and touchable. That’s the secret of her success.

Her tour managers are ready to receive a large crowd at Alexandra Palace this weekend. They are recommending that anyone who wants a hug should arrive an hour before the doors open. There will be a token system, they say, and people will be hugged in the order in which they arrive. They know that plenty of people are prepared to spend all day waiting their turn in exchange for a moment of solace ·