An interview with David Deida by Vijay Rana

David Deida 2002, must have the biggest balls in contemporary spirituality. Being able to teach and live integrated sex, relationship, and transcendence is no easy task. 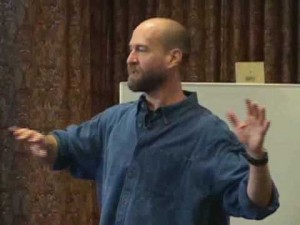 It requires immense courage, wisdom, and above all fearless loving. Aspects of sex, relationships, and transcendence get repressed and distorted. As a result you’ll find teachings on how to become a multi-orgasmic-tantric sex bomb, how to communicate with the opposite sex because they’re from another planet, or how to ignore the whole issue by becoming a spiritual seeker forever inquiring Who Am I? In Deida, all this gets included in one radical teaching.

Deida gracefully illuminates and integrates the rawness of sex, the polarity of the masculine/feminine relationship, and the heart’s true desire to transcend it all. Through the communion of duality in its most obvious play, the realization of Love/Oneness that lies at the very heart of us is recognised. Deida is this love’s true poet, helping us to get real, get wild, open up and be truly liberated. Vijay Rana: Firstly, can you tell me a little about the character “David Deida” and how he was transformed from an ordinary guy to sex-love god.

David Deida: Wow, that’s the first time anybody’s called me a “sex-love god.” It’s difficult for me not to laugh when I hear such references! In the foreword to one of my books for women, Dear Lover, Marianne Williamson kindly referred to me as a “wizard of romance.” She’s an incredibly compassionate person.

The secret to sex, as with anything, is to relax completely and give every aspect of you—including your heart and genitals—as an offering, for the sake of others. The key is to rest loosely and openly. Vulnerably open to feel yourself, your lover, and the entire world fully. Receive your lover and the world into the most tender parts of your heart, right now—whether painful or pleasurable—while unabashedly giving your heart’s deepest gift without holding back at all. Offer your truest gift right now, as if you were going to die the next moment—with no love left ungiven. To live love this fully and spontaneously is a yoga, or an art, whether you are writhing in sex, meditating, or baking cookies.

I had great teachers from a very early age. They showed me that women—and all aspects of the entire world—are here to be worshipped as love’s mystery—even when it all feels like a pain in the ass. The only cure for dissatisfaction, whether with your lover or the world, is tenderly feeling what is, as it is. In other words, feel your lover inside and out, feel the world without any resistance or strategy, rest open as love’s embrace, spontaneously offering your life, including your heart and genitals, for the sake of others—this is what it is to be a “sex-love god,” I suppose. Uncontrived, unconfined, knowing, loving, openness.

But this includes all the possible details. Oral sex, threesomes, commitments, arguments, financial and emotional conflicts—everything that is involved in intimacy can be approached as an art, a way to offer love’s gift. And so in my books I try to be as specific and practical as possible. Orgasms that last for hours, bright light suffusing up the spine and raining down as bliss, telepathic emotional communion with your lover—this is child’s play in the scheme of human loving, if you are willing to practice sexuality, like one would practice playing the piano. My teachers had trained me in these elementary sexual enjoyments while I was still a teenager. It wasn’t until more than a decade later that my teacher Mykonos kicked my butt and woke me out of my yogic perversions, as I describe in the book Wild Nights.

For those who are aiming at becoming sex-love gods, I would say, “At some point, everything is taken from you, including you. Relax that way, wide open as love, now.”

VR: Your descriptions of masculine and feminine “essence” make current understanding of gender roles/needs seem obsolete. How did you gain such real and profound insights into the core desires of what the masculine/feminine truly wants?

DD: By open-ended feeling. But don’t believe a word I say. Test it out. Within each of us are natural masculine and feminine forces. Whatever you are afraid of sexually, gently feel it through and through, until you realize that love is wide open, and all there is is feeling itself. Your heart may express this feeling-openness in many ways, including the passionate yearning to ravish your lover wide open, or to be taken and claimed in sweet surrender. You may even moan, “Oh God!” Masculine and feminine openness at play in savage divinity and sublime trust is what I’ve described in great detail in Finding God Through Sex and in Blue Truth.

VR: Why is your new book called Blue Truth?

DD: I am not a Buddhist, yet some of my traditional Buddhist friends felt like this book was a fresh revelation of deep Buddhist teachings—including sexual teachings that are not usually given until the highest tantras are presented in the traditional stages of Vajrayana Buddhism. So, even though I never intended it to be Buddhist-oriented while writing it—Buddhism isn’t mentioned once in the book—we titled the book Naked Buddhism. I have great respect for traditional Buddhist practitioners, so I hope they have enough humor to give the title a little leeway. True compassion is the warm humor of love while knowing—feeling—death, which is letting go as the very openness that is this moment’s abundant show of color, sounds, smells, bodies, and even book titles.

VR: Most people can’t even look me in the eye, let alone feel through to the core of their being. Doesn’t the emotional bondage that keeps us closed need to be processed before we can begin to open and feel anything fully?

DD: I’d suggest psychological processing until you are no longer interested in processing, which may require years or minutes. Then, when any clinging to life being one way or another has spontaneously dissolved, when you have been disillusioned to the core, relax and feel what is right now.

You are already feeling open, but you are afraid of the consequences of living your own truth fully. I mean, who would you have sex with if you were totally free as love? How would you earn your living if you had no fear at all? How would you live if you totally relaxed and truly gave your love, without holding anything back, without effortfully resisting or forcing? To simply be is terrifying, if you want to also exist as a separate self with a life story, a secure marriage, a successful destiny. To simply be is openness. This openness, or love, is who you truly are, and is always already the case, as Adi Da or Ken Wilber might say.

VR: In a “great” essay on your friend and philosopher Ken Wilber you criticize him for not giving his true gift and love to the world by being too “good”. Goodness in this sense means compromising, holding back and neatly packaging your gift so that people won’t get too overwhelmed. Conversely greatness implies not waiting to love, but giving ones gift now, holding nothing back, being ruthlessly loving. Wisdom, Ken replies, is a balance between “greatness” and “goodness”. Did you go wild on “greatness” when you wrote Waiting to Love?

DD: First of all, Ken Wilber is always right, and I mean that in the most suspicious way. (That’s a joke, for the many people who misunderstood the essay in the first place.) Being more serious, I think that balance is wisdom, up to a point. After a certain depth of realization, most people do not remain “balanced.” Ramana Maharshi, who Ken and many others (including myself) laud as one of the greatest known sages in recent history, was not a balanced personality. He let his body rot—watching old videos of him would drive a modern-day body-worker crazy— he worshipped one specific mountain as God, refused potentially healing medicine, and said his cow was enlightened. He wasn’t moved to provide an “integral” teaching that included sexuality, right livelihood, exercise routines, and so forth. His mere depth of being was sufficient—for realization, not for the nuances of playing a guitar, building a business, or the art of sexual loving.

Although a current fad amongst some spiritual intellectuals is an integral approach to spirituality, when you are being open right now, fully relaxing as what is, the body, mind, and emotions themselves seem as if transparent, or merely apparent. To paraphrase Ramana Maharshi, if it’s not there when you’re dead (or even dead asleep), then it isn’t real. Ken, of course, knows this—he’s written about it. Ken admits that much of his audience isn’t ready to handle this depth of truth—that their personal self, their body and mind, are mere appearances—and so Ken, in his wisdom, instead coaxes his readers toward an integral viewpoint, which is healthy. He also knows that all viewpoints—including mine or Ken’s—are partial, temporary, and spontaneous displays of love’s open play.

So, in this brief appearance, I seem a less balanced person than Ken, and certainly much less wise, but my art is different than his. Balancing greatness and goodness is a virtue for those who want to emulate Ken’s art. If you like it balanced, go for it. Thanks to my teachers, I no longer consider balance—or an integral spirituality—a particularly artful virtue. Getting drunk and singing poetry like Rumi, sitting and rotting like Maharshi—spiritual art is like pornography: you may not be able to define it, but you know it when you feel it. Waiting to Love is a call for each of us to recognize the One who we are, relax as this openness of love, and allow our spontaneous gifts—including our sexual offerings, if we are so moved—to spring from this uncontrived, natural gesture of love, untamed.