by Pythia Peay: This is first in a series of Interviews with contemporary Jungian analysts Marion Woodman. 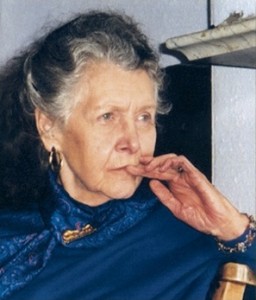 At the age of 81, with over 500,000 books in print, Marion Woodman is a wise elder in the field of Jungian psychology. As a leader in women’s psychology and spirituality, and a pioneer in body and dream work, she has had a powerful effect on the inner lives of many, including my own. Woodman was among the first to apply Jungian concepts to eating disorders, and to link addiction to the neglect of the “feminine” in contemporary culture.

Woodman’s path to becoming a Jungian analyst took a circuitous route. As a high school English teacher in Canada in 1968, she became restless for a “new frame” of meaning. Traveling to India, she sought, but failed to find, a spiritual teacher. Then, while on sabbatical in England, a friend referred her to 78-year-old Jungian analyst E. A. Bennett. The encounter, she said, “changed me completely.” Taking a leave of absence from teaching, Woodman enrolled at Zurich’s C.G. Jung Institute, and embarked on her journey to become an analyst.

I spoke with her recently at her home in Ontario, where she lives with her husband, Dr. Ross Woodman, a professor of English.

Pythia: What is the difference between Jungian analysis and a more conventional psychological approach?

Marion: The Jungian approach speaks to the soul. In a Jungian analysis you are trying to know who you really are through opening to the unconscious and working with your dreams. The more you work with your dreams and your unconscious, and honor it, the more you understand it and it understands you. When you develop a relationship with your psyche this way, you begin to carry that energy into life and your relationships.

Pythia: Your unique contribution to Jung’s work has been to examine the symbolic meaning in eating disorders. You even say that these addictions are purposeful. Can you say more about this?

Marion: I love working with addicts, because I used to be one myself (Woodman suffered from anorexia at one time). I tend to be a high-spirited creature; I’d go on a diet and starve, and then I’d gorge. Through Jungian analysis, I began to realize that an addiction is a symptom of something much deeper. The addict gets focused on the physical object — such as a chocolate cake — and doesn’t see that the longing for sweets is really a yearning for love or sweetness. So instead of eating a whole chocolate cake, the addict could ask: “How could I have that sweetness without eating cake? What can I feed my soul instead of my body? I’m hungry, but am I hungry for sugar or for love?” An addict could also try to feed her soul through listening to a magnificent piece of music, taking a walk, or even going to a movie that feeds the imagination. This awareness brings out the deeper level of meaning within our addictions.

Pythia: You have said that to bring feminine values into our culture is the “Great Work.” But what exactly is “the feminine”

Marion: I would say fundamentally that it’s the love of nature, and a belief in the body as a part of nature as we see it outside in the woods or rivers. The feminine takes time for spontaneity and slow time, honors inner reality, and gives values to feelings without brutally repressing them as “sissy” or meaningless. Those living the feminine way choose to do something because it’s of genuine worth, and because they love it, and can therefore put their energy into something honestly. Whether a man or a woman, they’re guided by the question: Is this of value to me personally? Is this worth putting my energy and effort into it? Is this who I really am? This path is different from hammering through something, even though one’s heart isn’t in it. But living from the heart in this culture takes courage.

Pythia: Archetypal imagery is central to Jung’s work. This is displayed in the paintings from his inner journey that are in his private journal, the “Red Book.” What are your feelings on the publication of this work?

Marion: It’s magnificent to be able to share the inner world of the man who realized the power of images. Without imagery and imagination, the world is dry. Once we get used to listening to our dreams, our whole body responds like a musical instrument. Images are pictures of the soul and can be used to bridge psyche and the body — the whole body can be integrated through working with them.

Pythia: Can you give me an example of a healing image from one of your own dreams?

Marion: I’ve been very ill recently. At the lowest point I had a dream that a raven with a huge beak flew in through my window. It landed on my stomach and started to tear the skin off. The raven was trying to rip the illness out with its sharp beak. Sometimes, I have to confess, I’ve had that attitude toward my body: you will be thin, or you will be well. In the dream I realized that as long as I was hostile to the raven, I was going to be really sick — but by befriending it I had an ally. So (in the dream) I spoke to it gently and tried to calm it down, and it lost its hysteria. Through this dream I realized that I had to bring love and concentration to that part of my body — and that’s why I’m still sitting here in this chair today.