A U.S. astronaut departing this week for the International Space Station said Monday the bulk of the scientific benefits from the orbiting laboratory will be seen over the coming decade, 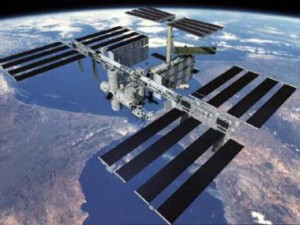 amid questions over whether the estimated $100 billion spent in last 12 years has been worth the effort.

“The first ten years were really intensive in the construction side of it, bringing all the pieces together and really getting the science enabled,” said NASA astronaut Kevin Ford, who will blast off on a Soyuz craft from the Russian-leased Baikonur spacer center in Kazakhstan on Tuesday together with Russian colleagues Oleg Novitsky and Yevgeny Tarelkin.

“We’re going to learn the bulk of everything we know about the science that we’re doing up there in the next decade,” he said at a press conference on the eve of the launch. He spoke from behind a glass screen designed to ensure the astronauts do not contract illnesses before their mission.

Of the three men departing Tuesday, only Ford has spent any time in orbit. He spent two weeks in space as pilot of the space shuttle Discovery in 2009 on a mission to transport scientific equipment to the ISS.

The U.S. space program has been in a vulnerable position since the decommissioning of the U.S. Shuttle fleet in 2011, which left Russia’s Soviet-designed Soyuz craft as the only means for international astronauts to reach the space station.

Earlier this month, California-based SpaceX successfully delivered a half-ton of supplies craft called Dragon to the ISS, the first official shipment under a $1.6 billion contract with NASA. The contract calls for 12 such shipments.

Ford said private companies like SpaceX and Virginia-based Orbital Sciences Corp., whose Cygnus cargo vehicle is scheduled for its first trip to the ISS in December, would ensure the sustainability of the lab over the coming decade and enable new exploration.

“These companies out there are themselves learning a lot about getting to and from low-earth orbit and picking up that task so that NASA can indeed begin to concentrate on things out of earth orbit and going out further into our solar system,” Ford said.

His remarks echo a statement to Congress in September by William Gerstenmaier, NASA’s associate administrator for space operations.

Gerstenmaier said commercial transportation would enable the United States to fly its own astronauts to and from the International Space Station, “end our sole reliance on foreign governments” and allow for the expansion of the full-time crew to seven from six.

The incoming Dragon held 1,000 pounds of groceries, clothes, science experiments and other gear. It is to depart with almost twice that much cargo at the end of the month. Dragon is the only cargo ship capable of bringing back research and other items, filling a void left by NASA’s retired shuttles.

The departure of the Dragon and a spacewalk to carry out repair operations on the station will be among the first operations to be handled by the incoming team.

“We really face a lot of tasks that we’ll concentrate on right off the bat when we get aboard,” Ford said. “After the spacewalk comes down, hopefully we’ll have a little time to catch our breath.”

U.S. astronaut Sunita Williams, Russia’s Yuri Malenchenko and Aki Hoshide of Japan, who have been at the ISS since mid-July, are scheduled to return to Earth next month.

Another multinational three-man crew, with astronauts from the United States, Canada and Russia, will set off from Baikonur in late December to take their place.

“Christmas Day … has already been cancelled because we’ll be having a Soyuz arriving aboard with our crewmates,” Ford said. “Perhaps when they arrive it will be like Santa Claus arriving and bringing us gifts from Earth.”